Intel's share price barely budged this year while those of its two largest peers -- TSMC and Qualcomm -- surged. What do things look like going forward?

Microprocessor giant Intel (INTC 1.59%) had a great year in 2014. Its data-center business surged by more than 18% year over year, and its personal computer revenue grew in what was expected to be yet another down year for the beleaguered personal computer market.

Things just generally went well for the chipmaker, which allowed the company's stock to rise from just under $26 per share to just over $36 per share -- about a 40% gain.

Since then, though, Intel stock hasn't done all that well. It dropped over the course of 2015 from just over $36 per share to about $34.45 per share. Year to date in 2016, with the year almost over, Intel shares are up nearly 7%, which isn't terrible in absolute terms -- a gain is a gain, after all.

Qualcomm's up just under 39% year to date, enjoying a healthy recovery after a dismal 2015, and TSMC is up 33.45% year to date after experiencing a roughly flat 2015 in terms of stock price.

Looking at a single year's performance in isolation doesn't tell investors the whole story. After all, if a stock dropped 75% in one year and then rose by 100% the following year, investors who had to suffer that 75% drop are still down 50% compared to where they were before that precipitous plunge.

That's why it's important to look at how a stock has performed over a longer period relative to its peers. So how does Intel's share price performance stack up to Qualcomm's and TSMC's since the beginning of 2013?

Taking this longer-term view puts Intel in a far better light compared with Qualcomm and TSMC than this year's results do. If an investor had picked one of these three large-cap chip companies to invest her or his money into at the start of 2013, the highest share price appreciation would have come from Intel, followed by TSMC. Qualcomm would have been, by far, the worst performer of the bunch over that time frame.

Peering at the underlying fundamentals

Although stock prices are what ultimately matter at the end of the day, it's also important to look at the fundamental revenue and profit performances of each company over that period. 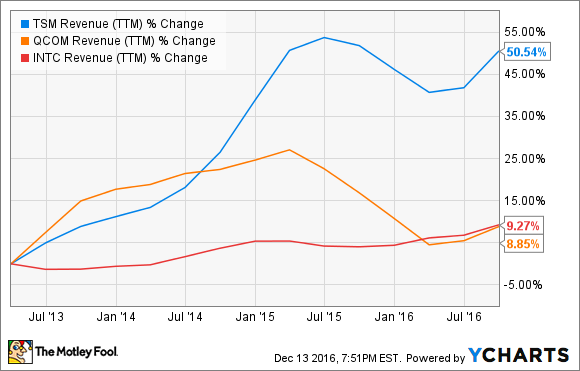 In terms of operating profit growth, TSMC once again has far outperformed its peers, growing at 64.4% over that time, versus declines for both Intel and Qualcomm: 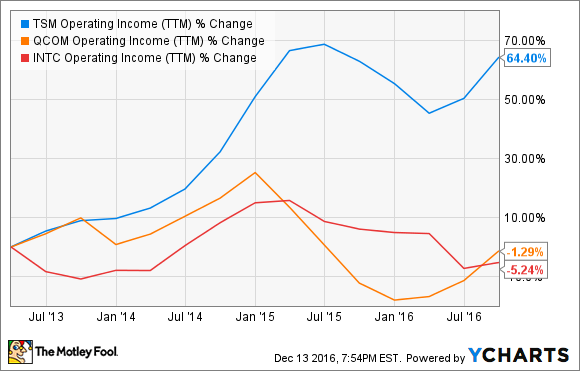 Intel's 5.24% operating income decline represents the worst performance of the bunch, followed by Qualcomm's 1.29% decline in operating profit. Both companies saw operating profit decline even as revenues grew, suggesting that both suffered operating margin contraction. TSMC's operating-profit growth has been very robust over that time, up by 64.4% and outpacing revenue growth, meaning that operating margin expanded.

As far as stock price performance goes, Intel underperformed in 2016, but has done reasonably well over a three-year time horizon. In terms of the underlying financial fundamentals, Intel's revenue is up, but nowhere near as much as the stock price is. Operating income is actually down a smidgen.

This fundamental performance is reflective of the fact that the personal computer market -- to which Intel is heavily exposed -- has declined, offsetting the growth that the company has enjoyed in other areas (such as in its data center group and Internet of Things group). It has also boosted its operating expenses to invest in those future opportunities beyond the personal computer market.

Intel is doing what it needs to in order to secure its long-term future, but investments take time, which dents near-term profitability.

If the investments that Intel is making ultimately prove successful, we should see both an acceleration in revenue growth as well as growth in operating profit that starts to outpace revenue growth. I think, though, that investors are going to need to be patient, as it might still be a couple of more years before that potential fundamental financial outperformance might happen -- if it happens at all.