Before 2017 is out, space pioneer Moon Express will make its maiden launch aboard a Rocket Lab Electron rocket. Its mission: to land a robot on the Moon, beam back high-definition video proving its accomplishment, and collect a $25 million "XPRIZE" from Alphabet (NASDAQ:GOOG) (NASDAQ:GOOGL).

Once that happens, Moon Express will have become the first private company to visit Earth's most famous satellite -- and that's only the beginning. In rapid succession, Moon Express plans to launch up to four additional lunar missions, landing equipment and science experiments on the Moon for a variety of government and corporate clients.

Then Moon Express plans to bring lunar soil samples back to Earth.

And then comes the really big news: Within a decade, Moon Express plans to send people to the Moon. 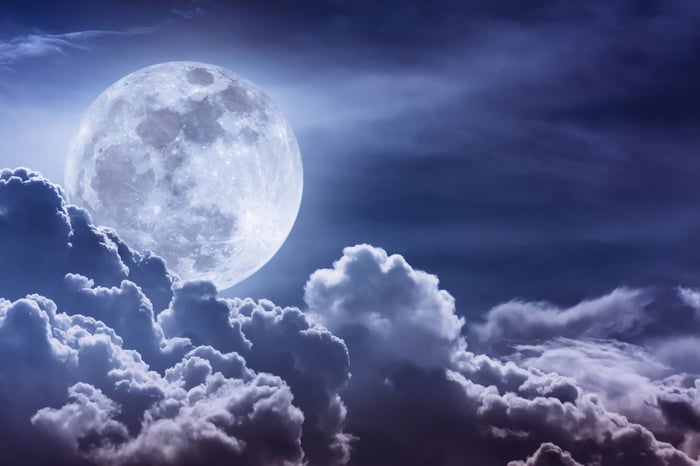 The eagle (will have) landed

That's right: As Moon Express co-founder Naveen Jain recently confided to CNBC, the company plans to land humans on the Moon -- for the first time in more than 40 years.

British daily The Mirror provided a few details on the plan last week. Once Moon Express has proven its ability to move robots to the Moon and back, it will expand the business model to add space tourism to the Moon. As Jain tells it, trips to the Moon could begin as early as 2026, and could cost as little as $10,000 per ticket.

But how likely is that, really?

In 1999, NASA famously estimated the cost of putting "a pound of payload in Earth orbit" at about $10,000. That was 17 years ago, though, and with inflation, that number is probably a lot higher today. But even if the cost had remained constant, the Moon is a whole lot farther away than low-Earth orbit -- and most tourists weigh a whole lot more than one pound. Given these facts, critics may be tempted to dismiss as sheer fantasy Jain's promise to send tourists all the way to the Moon for "$10,000."

To this, Jain replies that "every idea is a crazy idea until you make it happen -- and then people say 'of course!'" And granted, the latest published launch costs do seem to show that SpaceX, for example, can put payloads in orbit for just $5,650 per pound -- about half NASA's own cost.

Even if Moon Express can match that cost, however, it will still leave a long way to go to get the cost of a Moon landing down to $10,000 per person. And honestly, after crunching the numbers, I'm unable to make the math work.

Moon Express itself says its first unmanned mission to the Moon, carrying just 500 pounds of payload, will cost about $10 million. That's about the weight of three slightly undersized tourists -- not counting the weight of a spacecraft to carry them -- and even so, it implies a per-ticket cost of not less than $3.3 million.

However, this does not mean that the concept of space tourism to the Moon is entirely off-base. For the right price, it could still happen.

Consider: According to Moon Express, its medium-term business plan (sans astronauts) is to shuttle mechanical payloads to the Moon for private customers paying approximately $1.5 million per pound. At that price, it would seem feasible to transport a 200-pound paying passenger to the Moon for, say, $300 million or so.

Already the precedent has been set with Dennis Tito's famous $20 million trip to the International Space Station, followed by seven similar trips by passengers paying up to $40 million a head. Russia's Roscosmos recently advertised future flights to ISS at a cost of "about $45-50 million," while Boeing (NYSE:BA) has said that once its CST-100 space capsules begin making regular flights to ISS and back, it could sell seats aboard them for about $50 million as well.

Viewed in that context, as trips to ISS become passe, it's entirely possible that some well-heeled billionaire would ante up $300 million to visit someplace a bit less crowded, such as the Moon. But still...$10,000 a ticket?

How Much Does It Cost to Go to the Moon? @themotleyfool #stocks $GOOGL $GOOG $BA Next Article
Current