Under Armour (NYSE:UAA)(NYSE:UA) has had a rough year. Its stock has fallen roughly 35% for the UA (nonvoting) shares and roughly 25% for the UAA shares, making it the worst-performing stock among its peers in 2016. The reason for the fall was that analysts and investors started to believe that the company's heavy investment strategy may not yield the earnings previously forecast. Other than investments eating into earnings, here are three risks that could curb Under Armour's future growth and push the stock down further.

1. Adidas' resurgence: Analysts have long pegged Nike (NYSE: NKE) as the behemoth for Under Armour to set its sights on. Meanwhile, Adidas (OTC:ADDYY) has always been far larger than Under Armour, but for a few years it was written off as a slowing company without the competitiveness or innovation to put a damper on Under Armour's growth. Under Armour surpassed Adidas in 2014 by U.S. sales to claim the No. 2 spot in the sportswear market behind Nike.

Over the last year, however, the German sportswear company has upped its game in a big way. Adidas' sales and operating profit have both made impressive gains in the first three quarters of this year, up 14.6% and 33.3%, respectively, over the prior-year nine-month period. Revenue is up in each of Adidas' geographic segments, with a 21% rise year over year in North America and a move back to the No. 2 spot in the U.S. behind Nike.

Adidas' success in the last year has been helped by growth in casual sportswear, especially through backing from non-athlete celebrities like Kanye West, as well as by divesting from slower segments like golf to focus more attention on areas driving faster gains like running. Adidas' continued resurgence, especially in the U.S., could make growth harder for Under Armour.

2. Late start to casual sportswear: Adidas' recent success highlights an important growth opportunity in fashionable sportswear that is fitness-inspired but made for everyday wearing instead of just working out. Nike is also going after this market, and lululemon athletica (NASDAQ: LULU) seems to be doing well in this segment lately, especially with its growing line of men's clothing.

Under Armour is also pursuing this market, and in some unique ways. In September, Under Armour launched a line under a new logo called UAS, or Under Armour Sportswear, at New York Fashion Week. This high-end clothing is bold to say the least, but the company is also taking a more conventional approach to this segment with clothes like UA Threadborne, a softer, thicker material that feels very similar to Lululemon-type material. These new styles of lifestyle clothing are exciting, but Under Armour seems a little late to the casual-sportswear party. Losing market share in this segment to Adidas and Lululemon could lead to slower sales overall.

3. Growing debt: Under Armour's heavy investments are not only fueled by would-be earnings, but increasingly by new debt the company has taken on. Growth initiatives, such as the acquisition of multiple mobile apps, building out a line of wearable fitness trackers, and developing a manufacturing innovation center in Baltimore that uses expensive equipment like 3-D printers to test how products might be made in the future, seem to be what the company has increased its debt 900% in the last three years to build. 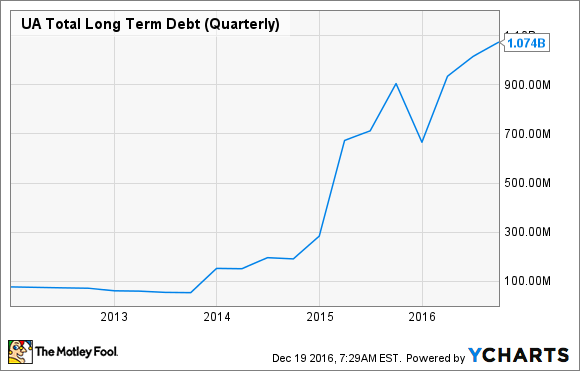 Under Armour's total debt has now reached over $1 billion as of the most recent quarter, up from less than $100 million in 2013. The company's debt levels still look in line when looking at its debt-to-equity ratio, a measure of growth fueled by debt vs. by equity (with one accounting for equal parts of each), which is still just 0.57. Still, growing debt should be a concern for long-term investors because getting stuck in a downtrend with too much debt could reduce the company's ability to spendin the future.

Under Armour's future in focus

The risks outlined above should be a concern for Under Armour investors. Still, Under Armour is taking bold steps to deal with these risks and to fuel more growth in the future. Investments in international growth, digital efforts, and manufacturing innovation could lead to much larger gains in the future and help Under Armour to compete even more effectively with Adidas and Nike. The company's willingness to go after new categories -- just as it did with footwear a few years ago, which has now become one of the company's most important growth segments -- should give investors a lot of confidence in what Under Armour can do in casual sportswear in the years ahead.