Please ensure Javascript is enabled for purposes of website accessibility
Log In Help Join The Motley Fool
Free Article Join Over 1 Million Premium Members And Get More In-Depth Stock Guidance and Research
By Andrew Tonner - Dec 19, 2016 at 11:35AM

AMD's stock has been on a tear, but it remains far from clear whether it can unseat these two powerful semiconductor names.

Though there are certainly some challengers, it's hard to find a hotter tech stock than Advanced Micro Devices (AMD -2.19%). Heading into the finish line for 2016, AMD stock has risen an astronomical 275% in 2016, roughly 34 times the Nasdaq Composite's respectable 8% uptick for the year: 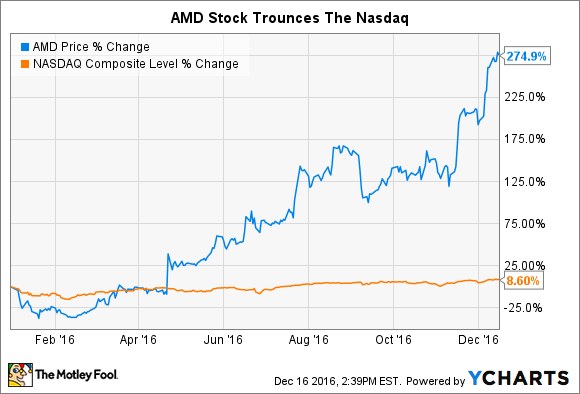 No stock rises so fast without an underlying catalyst, and that is indeed the case with AMD shares. The company has done an admirable job making the most of its unique exposure to the computer microprocessor (CPU) and graphics (GPU) markets. So if AMD is doing so well, why is this article about better alternatives to its stock?

After struggling to find a place in the mobile revolution, graphics processing unit (GPU) leader NVIDIA (NVDA -6.30%) has found itself unexpectedly at the heart of some of the most exciting growth markets in tech today. Self-driving cars, artificial intelligence, and big data might sound like buzz words to some, but to NVIDIA, they're core markets for its high-end graphics chips. In fact, NVIDIA saw double-digit growth in the three business segments that cater to these markets. In terms of being more attractive than AMD, this leadership position in higher-growth semiconductor markets would be enough to make NVIDIA the better buy. 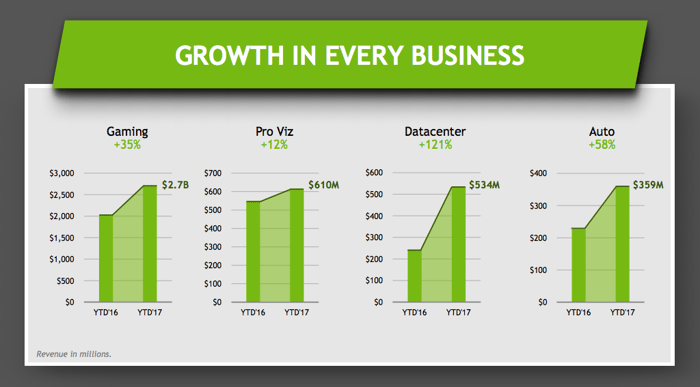 However, NVIDIA remains better positioned in the market where it competes directly with AMD, despite recent success on AMD's part. It's no secret that AMD has stolen some of NVIDIA's market share for desktop GPUs, but this overlooks two important facts. First, the overall market for PC graphics chips is shrinking in terms of unit shipments, making AMD's success in this space somewhat less appealing. What is more, NVIDIA's popularity among gamers, an enthusiast market that covets top-notch performance, has allowed it to continue to increase costs in the face of falling PC sales. Furthermore, NVIDIA is rumored to be preparing a lower-cost graphics chip to defend its market share from AMD next year. So for long-term investors comparing the two, NVIDIA is a better choice.

Intel (INTC -0.03%) dominates the market for PC and server microprocessors, and a meaningful part of AMD's recent rally has been fueled by the assumption that AMD can steal some market share from Intel in one or both of these industries.

Much has been made of AMD's forthcoming Zen CPU, which could offer graphics advantages over Intel's current chips, as Intel's chip roadmap appears focused on driving computing-performance improvements as usual. It still seems more likely that consumer preferences will be biased toward valuing faster computing power over moderately improved graphics.

Looking at the bigger picture, Intel's massive resource advantage over AMD -- Intel's research-and-development budget is larger than AMD's total revenues -- should insulate it from individual design wins that might translate into a longer-term shift away from its chips. Intel might not be the growth giant that it was a generation ago, but in my eyes its financial muscle and strong tradition of execution still make it a safer long-term bet than AMD's high-flying shares.

In many ways, this article is as much an argument for NVIDIA and Intel shares as it is a caution against AMD stock. As a company, AMD is undoubtedly improving. AMD has adeptly tapped into its core opportunity in the console gaming market, while looking to position its mix of computing and graphics know-how as an alternative to NVIDIA and Intel in their respective markets.

Though this strategy could certainly work, it will be hard to dislodge either NVIDIA or Intel from their respective positions of strength. As we've seen in other consumer-hardware verticals like the PC market, cost advantages rarely trump performance advantages, so in this way AMD remains at a disadvantage to both Intel and NVIDIA.

What's more, we're still early in AMD's comeback story, and the company has fallen badly on its face in the past. So while AMD shares have eviscerated the market over the past 12 months, it's far less clear that the company can do so again over the next 12.

Andrew Tonner has no position in any stocks mentioned. The Motley Fool owns shares of and recommends Nvidia. The Motley Fool recommends Intel. Try any of our Foolish newsletter services free for 30 days. We Fools may not all hold the same opinions, but we all believe that considering a diverse range of insights makes us better investors. The Motley Fool has a disclosure policy.