On Thursday, Dec. 15, Terraform Power Inc (NASDAQ:TERP) held an investor conference call for the first time in over 13 months. The call provided analysts and shareholders with a chance to get caught up with the company's 2016 results, as well as get updated on what to expect in 2017 and beyond. Not surprisingly, multiple questions were asked about the potential reinstatement of the company's dividend, which was last paid in December 2015.

Management wouldn't provide any definitive guidance, but based on the 2016 and 2017 financial guidance, it seems very likely that the dividend, when reinstated, will be materially lower than it was previously. On the plus side, the market was probably already pricing this in.

The stated purpose of the call was to update shareholders on Terraform Power's officially filed Q4 2015 and Q1 2016 financials, along with updated guidance for the full year 2016 and 2017 financials. Management provided confirmation that the company will soon return to normal operations, a great sign for investors. Unfortunately, the company's 2016 and 2017 CAFD (cash available for distribution) projections were much lower than had been projected before the SunEdison bankruptcy. 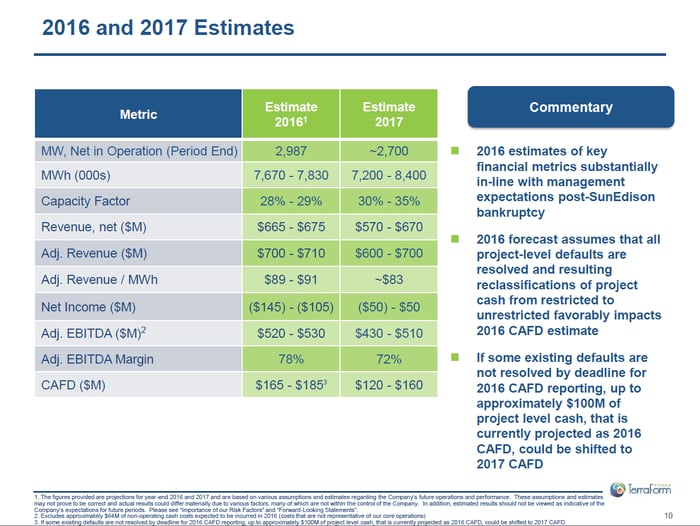 While many of the questions raised during the call were well answered by interim CEO Peter Blackmore and CFO Rebecca Cranna, they were unwilling to provide responses to most questions related to the dividend, at least for now. This is because Terraform Power is extremely focused on delivering the following over the next one to three months:

As part of the strategic review, Terraform Power is currently soliciting bids from third parties such as Brookfield Renewable Partners LP (NYSE:BEP), with final bids due in January. Given the strong potential for the company to be fully sold or receive a new sponsor, management felt that discussing a dividend reinstatement was premature. However, they did confirm that, pending the bidding process results, the goal is to reinstate a dividend as soon as possible.

What can shareholders expect regarding the dividend?

While it remains entirely possible that Terraform Power will receive a strong enough bid to buy out the entire company, many investors would prefer that the company remain publicly traded, reinstate the dividend, and begin growing the portfolio again via new acquisitions. If this occurred, the company would likely drop the initial quarterly dividend to around $0.24 per share, down from the last quarterly dividend payment made, of $0.35 per share.

This can be calculated by using the midpoint of the Terraform Power's 2016 and 2017 cash available for distribution (CAFD) projections: $175 million and $140 million. The company's previous policy was to pay out 85% of annual CAFD while reinvesting the rest. The company also has about 139.5 million shares outstanding when combining the class A shares and class B (currently owned by SunEdison) shares.

While the likely 30% drop in the dividend is not great news for long-suffering Terraform Power shareholders, it's important to note that, according to the terms of their current agreement with SunEdison, they would also be set to capture previously unpaid minimum quarterly dividends of $0.225 per share for each quarter since March 2016. This would have to occur before SunEdison, or any new sponsor (who would be the new owner of the class B shares), could collect any dividend whatsoever.

Under an optimistic scenario, it's possible that shareholders could receive $0.90/share in catch-up dividends, plus a $0.24 per share newly reinstated quarterly dividend, in March 2017. Of course, at this point, nothing is guaranteed, but it's interesting to compare the company's future potential yield of 7% ($0.96/$13.50) to the current yields of other similar Yieldcos, as seen in the chart below. 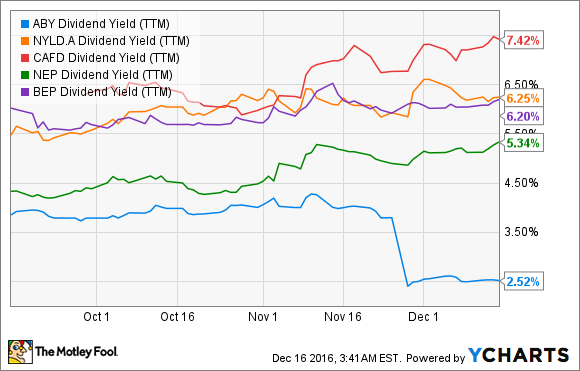 Even at its new, lower yield, Terraform Power would still be a good deal in comparison to it's peers in the Yieldco space. There are certainly additional risks, which have been discussed in previous articles, but this Fool expects to see the stock price move up over the next few months as the company regains financial compliance and completes its strategic bidding process.