Despite the Dow Jones Industrial Average falling slightly on Friday and landing short of the 20,000 mark, it still managed a small weekly gain last week, which allowed it to post its longest weekly winning streak of the past year. The Dow has now posted a weekly gain for each of the past six weeks. Here are a couple of highlights from last week.

More of the same from Boeing

If there's one thing that The Boeing Co. (NYSE:BA) has done extraordinarily well, it's returning value to shareholders through dividends and share buybacks. The commercial aircraft juggernaut was at it again last week, increasing its quarterly dividend by 30% to $1.42 per share, bringing its yield to about 3.6%. If you're keeping track, this will be the 75th year it has paid a dividend. Better yet, it has raised its dividend substantially recently, by more than 190% over the past four years. Just look at how quickly its payout has skyrocketed. 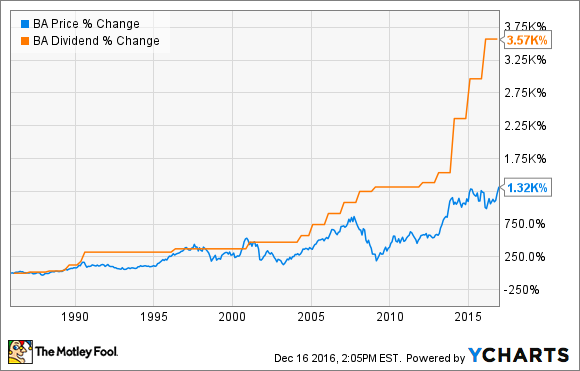 But wait, there's more. Not only did Boeing raise its dividend, it replaced its existing repurchase program with a new $14 billion authorization. With about $7 billion left on the previous plan, it pressed the reset button and restored its authorization back $14 billion, to continue shrinking the number of shares it has outstanding.

"As our team delivers on our large and diverse order backlog, and drives greater efficiency across our business, Boeing is well positioned to generate increasing cash flows and meet our commitment to provide competitive returns to our shareholders. At the same time, Boeing is continuing to invest in our people, innovation and growth as part of a balanced cash deployment strategy." said CEO Dennis Muilenburg.

Retailers' results have been hit-or-miss in recent years, and Pier 1 Imports (OTC:PIRRQ) hit a home run last week: Its shares soared more than 35% initially, and settled for a roughly 28% weekly gain after reporting a blowout third quarter.

Despite its revenue falling by a slight 0.4% to $475.4 million, its comparable-store sales increased 1.8% in Q3. That difference in direction can be traced to the company reducing its store count by about 3% over the past year. Revenue topped analysts' consensus estimate of $467 million, and on the bottom line, the retailer posted earnings of $0.13 per share compared to the prior year's result of $0.11 per share, and above analysts' expectation of $0.12 per share.

Arguably one of the highlights from Q3 was that Pier 1's e-commerce sales jumped 28% and now generate roughly 20% of total revenue. Retailers that are able to adapt to the new normal of online retail are going to be the stocks that surge in the coming years, and Pier 1 is trying to convince investors it's one of those companies. To top everything off on a good note, management also lifted guidance for the fourth quarter, forecasting earnings per share in the $0.28 to $0.32 range, above analysts' consensus estimate of $0.27.

One step forward of GM

General Motors (NYSE:GM) made news as it began selling its Chevrolet Bolt electric vehicle, though only in a limited area. While GM hopes to make the Bolt available nationwide by mid-2017, at the moment, Chevrolet dealerships in San Francisco made the first handful of deliveries, with more on the way.

Many have tagged the Bolt as a Tesla Model 3 competitor, but to me it seems GM has different plans in mind. The Bolt is likely to be more of a play into the future of autonomous vehicles, or smart mobility – think programs similar to Uber, or other car-sharing options. And on that note, GM also announced it would become the first company to mass-produce autonomous driverless vehicles, with test versions of the Bolt planned to roll out of Michigan assembly plants as early as next month.

Moreover, while management has refused to set a time frame for when autonomous Bolts could be available to the public, management has noted it would eventually add autonomous Bolts to the fleet of Lyft, the ride-hailing company into which GM has invested $500 million. In my opinion, investors shouldn't look at the Bolt as a direct competitor to Tesla's Model 3, despite its electric nature and similar price point. Rather, look at the Bolt as a step toward GM's autonomous and smart mobility business future.