At the core of Amazon's (NASDAQ:AMZN) online retail model is the idea that scale in both online sales and fulfillment will eventually lead to lower costs and rising profits for investors. To that end, the company has built out a massive distribution infrastructure and has recently been building a delivery network to cut the power UPS (NYSE: UPS), FedEx (NYSE: FDX), and the United States Postal Service have in the supply chain.

While the story of scale as an advantage sounds good, the reality has been very different for Amazon. Over the past five years, the cost to fulfill each order has risen and shows no sign of stopping. This is despite the company's enormous scale and Amazon itself delivering more and more packages. And if you're an Amazon investor it's a trend worth watching.

Fulfillment costs are out of control

Fulfillment has always been a big part of Amazon's business. Running warehouses and shipping packages is at the core of its business. So, I dug into fulfillment costs as a percentage of each dollar of sales.

Amazon reports fulfillment costs in its quarterly reports and it is one of its biggest operating line items. But to get a better picture of proportion we need to pull out AWS, its cloud services business, which doesn't require shipping. Then we can look at how much it costs Amazon to fulfill orders from its website. Amazon started reporting revenue from AWS two years ago, so we can pull that out of the total for those quarters, but it's worth noting that the figures below include AWS before Q4 2014, although AWS was only 5% of sales at that time.

And fulfillment costs have been rising. In the third quarter of 2016, fulfillment costs were 14.7% of retail sales, which is up from 12.3% in Q4 2014, when the company started reporting AWS separately. Both figures are also up significantly from fulfillment costs of 9.8% of overall sales in Q1 2012 (which included AWS). 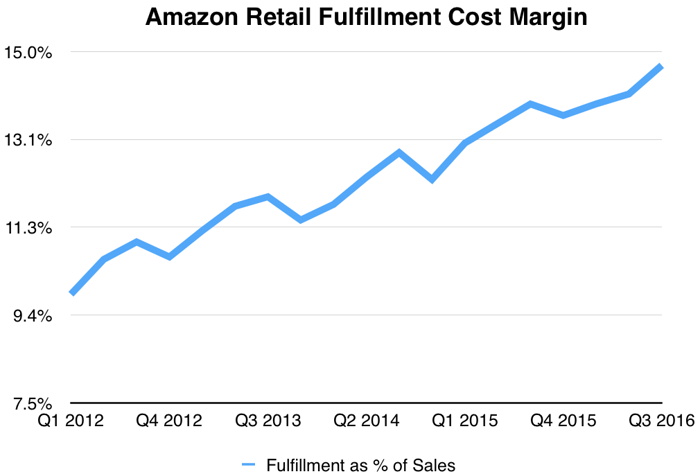 Data from Amazon's quarterly reports. Chart by the author.

This is an alarming trend for a company that's supposed to be on the leading edge of retail. Instead of becoming more efficient in its fulfillment business, Amazon is becoming less efficient. This makes it harder to make money and puts pressure on the price the company has to charge customers.

Why fulfillment costs are such a big deal

One of the reasons I'm so interested in fulfillment costs is because Amazon is having a harder and harder time as a low-cost retailer. Studies have shown that Amazon isn't cheaper than Target (NYSE:TGT) or Wal-Mart (NYSE:WMT) for some key grocery items. Amazon tries to keep its image as a low-cost retailer by discounting commonly purchased items, but if you do most of your online shopping at Amazon it's likely you're not getting the best price.

Amazon is having a hard time creating a sustainable advantage that will lead to retail profits. The chart below is for the entire business, but you can see that Amazon's gross margins are higher than Target's and Wal-Mart's (because of AWS and higher prices), but operating margin is lower. Fulfillment costs are a big reason for the difference. 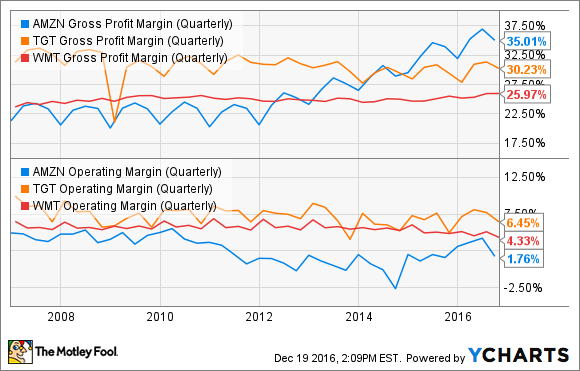 If fulfillment costs continue to rise, it'll be harder and harder for Amazon to make money in retail, which accounts for 90% of its business. Initiatives like hiring drivers and operating drones may be seen as a way to become more efficient, but the data show that as these initiatives are being rolled out costs are going up. That's something worth considering if you think Amazon will eventually flip a switch and begin spitting out profits regularly. That may be easier said than done.