The 4% rule has been a guiding principle for many retirees and retirement planners for nearly 30 years. The general idea is this: If you start your retirement withdrawing 4% of your retirement savings the first year and then increase that amount each year based on inflation, it should ensure that your retirement nest egg will last for decades.

Unfortunately, there are several reasons why the 4% rule is largely unworkable for potentially millions of American retirees. Let's take a closer look at the three most serious problems. 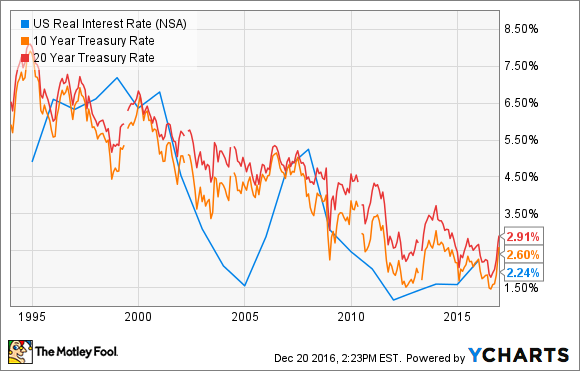 Millions of Americans have benefited from lower interest rates, with lower mortgage and auto loan payments.  This is great if you're a consumer of debt, but it's not such a good thing if you're an owner of debt, like a retiree who is counting on income from bond yields. As you can see in the table above, both the 10- and 20-year U.S. Treasury bonds, generally considered the safest holdings, pay yields that don't even match the 4% first-year withdrawal, much less future cost-of-living increases.

The biggest risk from a lack of acceptable bond yields is that many retirees may choose to invest a bigger portion of their retirement savings in stocks. And while retirees should have some exposure to stocks to generate long-term growth for later in life, this move can have damaging consequences because of the short-term volatility of stocks. 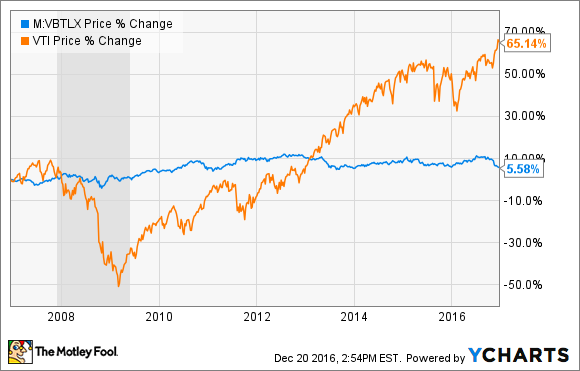 As you can see, the Vanguard Total Stock Market Fund has been a far better investment over the past decade -- exactly why stocks are important for long-term investing. But as you can also see in the chart above, the sharp loss in value for stocks took years to recover, while bonds generally maintained most of their value.

So if you're a near-retiree who's considering keeping a large portion of your portfolio invested in stocks, consider the risk that you could end up with far less later in life if Mr. Market doesn't do what you think it will in the short term. (Hint: He rarely does.)

The most serious problem could be you

The reality is that the biggest reason the 4% rule won't work for you could be you -- by which I mean, the average American's spending, debt, and saving habits. According to the Employee Benefit Research Institute, the average 401(k) balance in its database of people in their 60s was $171,641 in 2014, the most current data published.

If we apply the 4% rule to that, the average 401(k) would only generate $6,866 in income the first year. That's less than $600 per month. Considering that the average Social Security monthly benefit is around $1,500 per month, that's far from enough income for most retirees.

Even if it means going back to work, don't ignore the risks of a small retirement savings balance for late in life. Image source: Getty Images.

There's more, too. Retirees today generally have higher consumer debt, including more mortgage debt (and less home equity) than the same age group did 20 years ago. There's a double-edged sword impact here, since the combination of more debt and lower bond yields means that many retirees not only have less income from bonds but also pay out more of that lower income to cover debt than the prior generation.

And that, of course, leads too many retirees or near-retirees to take on the risks discussed earlier.

How you can mitigate these problems

Even if you're ready to retire or even already retired, there are things you can do to protect your nest egg and your retirement. And while that may require going back to work at least part-time in order to put off taking distributions for a few years or delaying retirement altogether in order to pay down debt or pump up your retirement savings before punching the clock the last time, these steps could make a huge difference when it matters the most -- later in life when you don't have the ability to earn wages and you'll need that nest egg the most.

If you're still years away from retirement, this could be an important wake-up call to pay down debt early and aggressively save for retirement as soon as you can. Not only will that help you avoid the self-inflicted things that make the 4% rule unworkable for many people, it could also give you a big enough margin of safety to support a happy retirement with even smaller withdrawals.