"Is there a [banking] business model that covers its cost of capital? That's the big, big, big question [which] makes [European] banks not really investable as a sector."

Frankfurt, we have a problem

The quote above is not from an aggressive short-seller -- it was spoken by Tidjane Thiam, CEO of Credit Suisse, one of the world's top 40 banks by assets. He was then speaking at a Bloomberg conference on Sept. 28. Two days earlier, German-listed shares of Deutsche Bank AG (NYSE:DB) had fallen to 10.55 euros -- a 24-year low, according to Bloomberg data. At that price, the bank was valued at roughly a quarter of its tangible net worth.

Tangible net worth (or "tangible book value") is an accounting measure of a company's equity value that excludes certain intangible items, such as goodwill. As such, it is a more conservative measure than book value.

With hindsight, the September bottom now looks like a huge buying opportunity -- through Friday's close, the shares have gained 74%. It's easy enough -- again, with hindsight -- to conclude that the market overreacted to reports that U.S. Justice Department would seek a $14 billion settlement with the bank in regard to the mis-selling of mortgage-backed securities during the run-up to the financial crisis.

As I write this, however, Deutsche's NYSE-listed ADRs remain priced just above the low set during the worst of the financial crisis in Jan. 2009 ($18.66). The question then remains: Is Deutsche Bank a buy?

My answer, for individual investors, is a categorical "no" and I think a single table is enough to show why. In a nod to Thiam's initial quote, you'll find below Deutsche Bank's return on common equity and return on assets for the period 2008 through 2015:

Granted, this period contains the worst of the financial crisis, but we recently marked the eighth anniversary of Lehman Brother's bankruptcy and Deutsche has produced but a single calendar year in which it has earned its cost of equity -- and that was back in 2009. Analysts typically use 10% as a benchmark for a large bank's cost of equity. They won't achieve that this year either, in case you were wondering.

Sure, banks have had to operate in a highly adverse environment through and since the financial crisis, but from their Jan. 20, 2009, low, Deutsche Bank's shares have been left in the dust by their global peers: 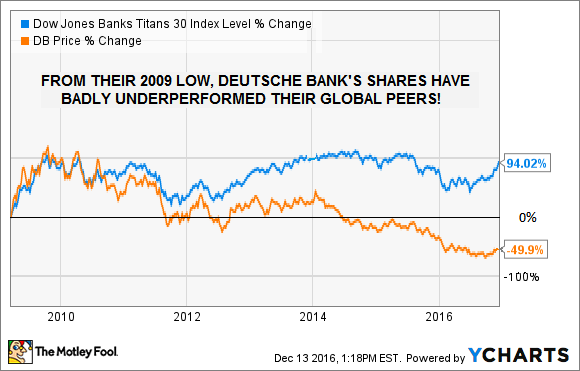 (That statement remains true even if we assume there is a problem. YCharts' data for Deutsche Bank -- Bloomberg has the U.S.-listed shares roughly flat over this period.)

The margin of underperformance is even greater if one were to stack up Deutsche's stock against that of the two U.S. investment banks against which it competes, Goldman Sachs and Morgan Stanley.

The promise of an adequate return?

Writing in The Intelligent Investor, Ben Graham, the father of value investing, defined an investment operation as "one which, upon thorough analysis, promises safety of principal and an adequate return. Operations not meeting these requirements are speculative."

By that standard, and from the standpoint of an individual investor, Deutsche Bank's shares cannot be considered anything other than speculative: How can one expect to earn an "adequate return" on a stock investment when the underlying business appears incapable of doing so on behalf of common stockholders?

Don't get me wrong: Professional investors may be able to convince themselves -- after much time and effort -- that Deutsche Bank will be able to earn an economic return going forward, i.e., that there is an investment case for the shares. For most individual investors, however, that exercise is probably beyond their ability. Even for those with the requisite time and expertise, I think it's a futile exercise in that there are simply easier ways to make money in the stock market.

At the same conference at which he dubbed European banks un-investable, Thiam went on to say that "Deutsche Bank is an old institution, a great institution and I really wish them well, I hope that they come out of their current predicament." I agree (well, on the "old" part, at any rate), but wishing is no basis for an investment.