It's been a busy year for General Electric (NYSE:GE). But since a late October merger announcement with Baker Hughes (NYSE:BHI), the company isn't slowing down. In fact, in a Dec. 14 presentation, CEO Jeff Immelt sounded more like a captain of the starship Enterprise: boldly going where no industrial conglomerate has gone before.

Here's what investors can expect from GE in the post-Baker Hughes era. 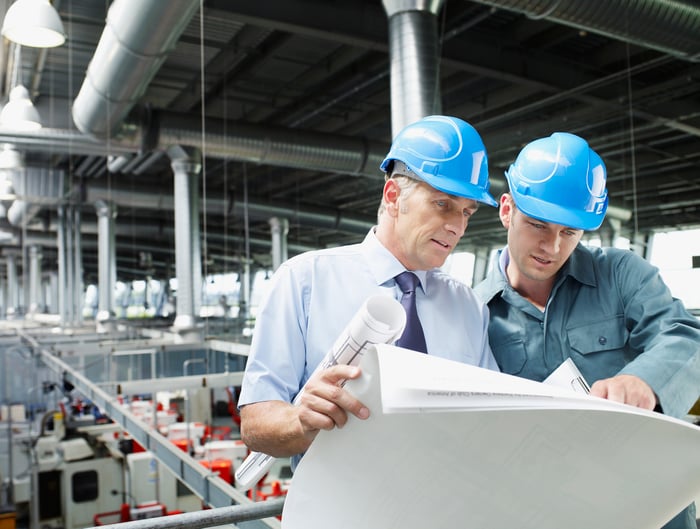 Probably the boldest-sounding statement by Immelt was his prediction of $2.00 per share in earnings by 2018. Current-year EPS is expected to be in the $1.48 to $1.52 range, so Immelt is forecasting a one-third increase in two years, which sounds like aggressive growth for such a large company. But when you look more deeply into the details, it doesn't seem quite so far-fetched.

Part of the trick -- and I do mean "trick" -- is share buybacks. By reducing the number of outstanding shares, GE can boost per-share earnings. So, while that's good for investors who hang onto their shares, it doesn't mean the company is actually growing overall earnings. Immelt expects buybacks to account for $0.16 of the per-share increase, or roughly one-third of the total increase in EPS.

Another $0.15 of the EPS increase, according to Immelt, will come from "capital allocation," by which he means mergers and acquisitions, including the big merger of GE's oil and gas division with Baker Hughes. That deal was unanimously approved by the companies' boards, but is still awaiting shareholder approval (which seems likely) and a green light from regulators (which, although less certain, still seems probable).

That leaves just $0.18 per share to come from good old-fashioned operations. Immelt attributes this to an organic growth rate of 3% to 5% plus 50 basis points of margin enhancement -- which, he notes, has been GE's historic run rate over the last five years. So, once you break it down, $2.00 a share seems like a pretty solid bet for GE in 2018.

You won't even recognize the place

General Electric is a very different company today than it was ten years ago. Gone is the stake in NBC Universal. Gone is the GE Capital portfolio, the simplification of which Immelt announced is substantially complete "really, a year ahead of time." Even the company's well-known appliance business is gone, sold to Chinese firm Haier.

The company has, of course, also made acquisitions. The Baker Hughes merger is a major one, as is the huge Alstom Power purchase. These two big additions will substantially increase the company's power and oil-and-gas businesses. Immelt also announced that two other GE units are up for sale, including GE Water, which supplies wastewater disposal and water-treatment systems, and GE Industrial Solutions, which supplies electrical grid and distribution systems. The sales are expected to close in 2017 and generate a combined $4 billion.

Meanwhile, GE is ramping up two other businesses in which it had no stake whatsoever a few years ago: digital industry and additive manufacturing. GE launched its powerful Predix cloud-based industrial operating and analytical platform this year, and sees a $5 billion opportunity for Predix-powered equipment and software orders in 2017 alone, which amounts to 20% to 30% growth.

Through its purchases of controlling stakes in the Swedish company Arcam AB (NASDAQOTH: AMAVF) and German company Concept Laser this year, GE has entered the 3D printing and additive manufacturing space with gusto. The company is predicting $300 million in revenue next year and $1 billion by 2020. GE also expects to see $3 billion to $5 billion in companywide cost savings as it begins to manufacture its own parts for internal use.

GE is also investing heavily in services. And while industrial equipment may bring in more revenue, it's the services that bring in the profits -- it costs a lot less to service equipment than to build it from scratch.

Immelt sees this services trend continuing to grow for GE:

Services has always been a big driver of competitive advantage and profitability. We have averaged about 5% organic growth over time. This year it was 3%, because we were depressed by some of the service revenue in the oil and gas sector. Next year, when I look at backlogs and we look at run rates, there is a fantastic opportunity to have a great year in services in 2017.

GE doesn't break out its profit margins on equipment sales versus services in its reporting. But in 2014, Immelt revealed that GE's industrial services had about a 30% profit margin. That's much higher than the company's overall operating margins, which were only 14.2% in 2014, so increased services revenue is likely to boost the company's profits.

It's shaping up to be a good year for GE in 2017. Better yet, the company's three- to five-year outlook is strong. However, investors should always be cautious when trying to predict a company's future performance. GE's strong projections could be derailed by unexpected events: If regulators squash the Baker Hughes deal, or glitches emerge with Predix, or oil prices drop significantly, GE's performance could suffer.

The good news for investors is that, because GE is such a large and diversified company, a lot would have to go wrong across several different business sectors to have a significant impact on the company's bottom line. In the medium term, GE's prospects are excellent.