Under Armour (NYSE:UAA) (NYSE:UA) shares underperformed both the broader market and rival Nike (NYSE:NKE) in 2016 as investors reacted to the sports apparel specialist's worsening profit outlook. There's much more to the business than just slowing earnings gains, though.

Here are a few charts that capture Under Armour's latest business trends and its key opportunities for future growth. 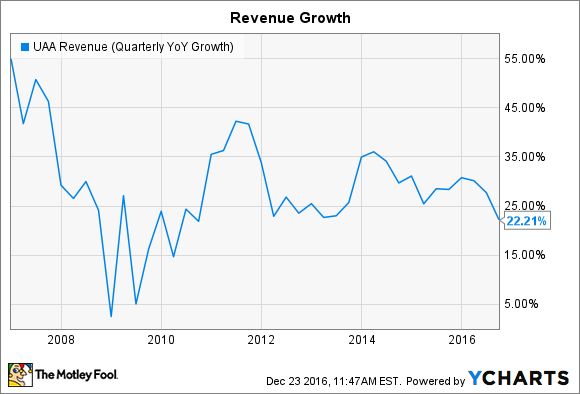 Under Armour has logged 26 straight quarters of 20% or better year-over-year sales growth. That impressive winning streak has helped push annual revenue to a $5 billion pace from less than $1.5 billion in 2011. Revenue more than doubled over the last three fiscal years, making it one of the fastest-growing companies in the S&P 500. Spiking footwear sales have been key to its market-thumping growth. That product category was worth just 13% of revenue in 2011 but is about to pass $1 billion of annual sales and account for more than 20% of Under Armour's business.

Key sponsorships, including of NBA star Stephen Curry, have helped. But the company also has a strong track record of innovating across sports, styles, and price points. Its latest Gemini and Bandit brand launches were hits with customers. Nearly a decade after it introduced its first football cleat, it now has the most popular version on the market at a significantly higher average price. Annual revenue from outside of the U.S. Chart by author. Data source: Under Armour financial filings.

Under Armour is becoming more of a global brand. International revenue made up 6% of sales in 2012, 9% in 2014, and is projected by management to hit 18% of the business by 2018. Even if it hits that aggressive target, it will be far behind rival Nike (NYSE:NKE), which counts more than 50% of sales from markets outside of the United States. 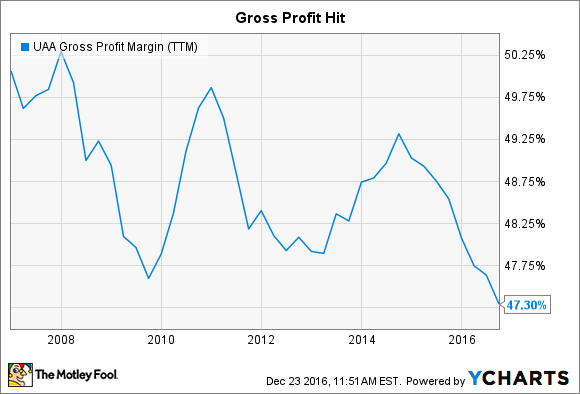 Profitability is at a 10-year low, with gross profit margin recently falling to 47% of sales. Part of that decline can be tied to the increased dependence on footwear, which tends to carry lower profit margins than apparel. However, Under Armour has also struggled recently with excess inventory, which has forced elevated use of price cuts. It isn't alone in this challenge. Nike is on track to deliver its second straight fiscal year of lower profitability, too.

The stock took a hit after CEO Kevin Plank and his executive team walked back their medium-term profit forecast. Management still believes the company will hit $7.5 billion in annual sales by 2018. However, it will likely fall short of its $800 million annual operating income target.

One factor behind the downgrade is a weakening U.S. market. Distribution is getting tougher thanks to recent bankruptcies like the one that liquidated Sports Authority. These changes disproportionately hurt Under Armour relative to bigger competitors like Nike because it about half of the retailing presence as the market leader. It's also becoming more expensive for Under Armour -- and rivals -- to lock up the marketing deals that power their long-run growth.

Wall Street never likes to hear about slowing profit gains. But Under Armour is making the right choice in prioritizing growth over earnings right now.

There will likely be plenty of room for expanding margins once the company passes its $7.5 billion sales milestone in 2018. Looking further out, if it can reach a $10 billion global scale, Under Armour should enjoy powerful leverage for generating increasing investor returns.