Wynn Resorts (NASDAQ:WYNN) was once one of the most impressive dividend stocks in its industry. At as high as 7.5% dividend yield in the recent past (due to a special dividend), Wynn has since slashed its dividend to now just 2% over the trailing 12 months. Things are starting to look good for Wynn's underlying business once more -- could this lead to a dividend raise in the year ahead?

Wynn Resorts stock rose massively in the run-up to 2014 thanks largely to the rise in Macau, the gaming mecca off the coast of Mainland China that, at its height, was earning around seven times the gaming revenue of Las Vegas. However, once the Chinese government imposed harsher regulations and Macau's gaming revenue was halved, Wynn's stock price also plummeted. 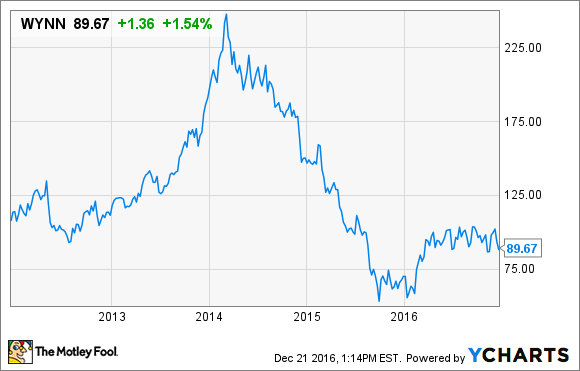 Wynn has a made a sizable recovery so far in 2016, up 30% year to date and hovering back around $90 per share. Those shares are still down drastically from around $250 in 2014, but the momentum could be back on Wynn's side.

Losing its place as the dividend leader

During Wynn's high-rolling performance leading up to the summer of 2014, before Macau's crash, the company paid out generous dividends. Wynn started paying a regularly quarterly dividend of $0.50 starting in 2010, which rose to $1.50 by 2015. However, Wynn really rewarded shareholders through special dividends, which the company paid out somewhat regularly including $8 dividends in 2010 and 2012. Together, those made it a dividend powerhouse in its industry, peaking at around a 7.5% yield. 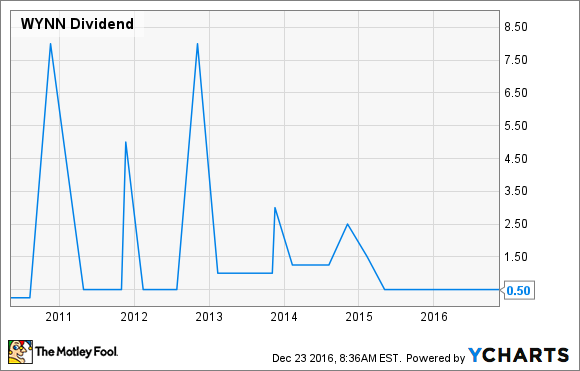 Following the company's woes in Macau, Wynn cut the dividend by two thirds back to $0.50 per share, and hasn't paid out a special dividend since. Cutting its dividend has put competitor Las Vegas Sands (NYSE:LVS) solely in the lead as the dividend player in the gaming industry. Las Vegas Sands pays out around 5.3% yield and has kept its dividend yield relatively steady through its own turmoils in the last two years.

Wynn has a lot going for it now. Macau figures starting to look positive again has certainly helped Wynn's stock price in the last few months. November data showed the fourth month in a row of year-over-year gains in gaming revenue in Macau, and at 14% above November 2015, the regrowth looks like significantly more than just a blip in the data, and total gaming revenue is expected to finish about three times higher in Macau than in Las Vegas for 2016 in total. Macau's renewed growth could be timely as Wynn opened a massive new casino resort there in August.

Outside of Macau, Wynn continues to bet on its U.S. operations for future growth. In Las Vegas, Wynn announced this year that it plans to overhaul the golf course at its main property and turn that space into a clear-water lagoon surrounded by white-sand beaches with watersports and firework shows, making the property more appealing. A new 1,000-room hotel will help drive higher sales as well. Wynn is also just starting construction on a new resort outside of Boston, Massachusetts.

Will Wynn raise its dividend in 2017?

While Wynn's stock price looks poised to continue rising in 2017 as Macau's recovery continues to take hold and investors get more excited about new developments in the U.S., does Wynn's future hold a raised dividend? It seems reasonable Wynn might reward shareholders with more special dividend payouts in 2017, as it's done in the past, when things have been going well and profits were rising. Wynn's dividend payout ratio is currently high, around 90%, but as earnings rise then there may be more room for special dividends. That would then raise Wynn's dividend yield.

However, Wynn raising its regular dividend payout might not be as likely. After being burned by the swift and excessive downturn in Macau, Wynn is likely to be more conservative in 2017 to see just how much this recovery will play out and store up some cash. Wynn has also shown in the last few quarters how willing it is to invest in future development in both Macau and the U.S., another reason the company might want to be more conservative with available cash instead of increasing its dividend.

Finally, Wynn has taken on a sizable amount of debt recently to fund much of its developments. That total long-term debt currently stands at around $9.5 billion, up from $3.5 billion just four years ago, and we can probably expect the company to take on even more debt in the coming few years to fund its other developments as well. That increased debt will also mean increased interest expense, which could limit dividend payouts in the years ahead.

The bottom line is that we could definitely see Wynn pay out a special dividend in 2017, or even increase its quarterly dividend payout as the company begins to perform better -- but I wouldn't bet on it. Instead, invest in Wynn because of what looks like a recovery starting in Macau, the steps the company is taking to overhaul its properties, growth in new areas like the East Coast, and Wynn's leadership that is committed to driving higher earnings long term.