It's easy to get caught up in the idea of the market potential for fuel cells. It was estimated to be worth $3.6 billion in 2016, according to Global Market Insights, which forecasts it will be worth $25.5 billion annually by 2024.

Based on that growth outlook, this would seem like an attractive space for investors to consider, but industry leaders like Plug Power Inc. (NASDAQ:PLUG), FuelCell Energy Inc. (NASDAQ:FCEL), and Ballard Power Systems Inc. (NASDAQ:BLDP) have struggled to make money. As a result, their stocks have been on a steady decline following a spike in shares in early 2014 (when hope for future growth was highest). Here's a look at why this is still an industry with an uphill battle ahead. 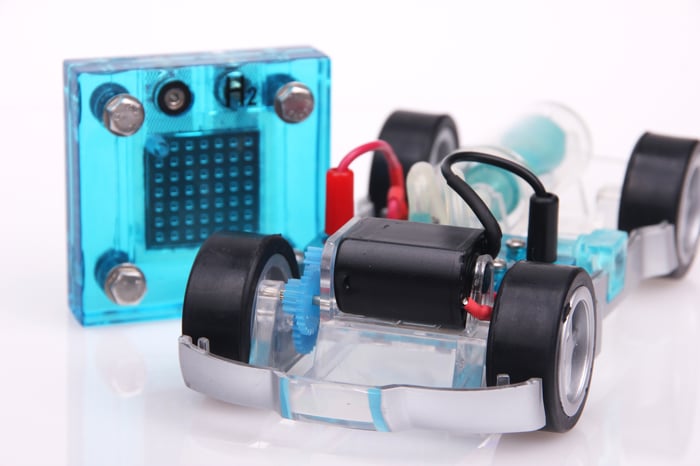 One consistent theme among Plug Power, FuelCell Energy, and Ballard Power Systems is that they've all lost money for many years. You can see that in the charts below, which also show that revenue growth hasn't been particularly impressive either. 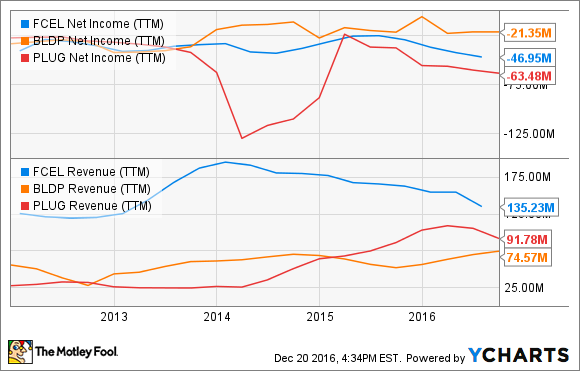 Losses aren't uncommon in nascent industries, but you would expect to see solid revenue growth alongside those losses. Alas, that's not the case with these three companies.

A report from consultancy 4th Energy Wave, which was published on Ballard Power Systems' website, shows why there are so many challenges. Some of the most attractive (and biggest) markets for fuel cells are in Asia, a region that is more difficult for U.S. companies to penetrate. And with hundreds of competitors globally making fuel cells and fuel cell stacks, these products aren't a novelty. Some companies have been researching the technology for decades, so its difficult for a manufacturer to differentiate its offerings from those of its competitors.

A constant drain on cash

When a company is losing money, it has to go somewhere to find the cash it needs to survive. In the case of Ballard Power Systems, Plug Power, and FuelCell Energy, that has meant going to the equities market to sell shares. You can see below that a constant cash burn from operations has coincided with rising share counts. 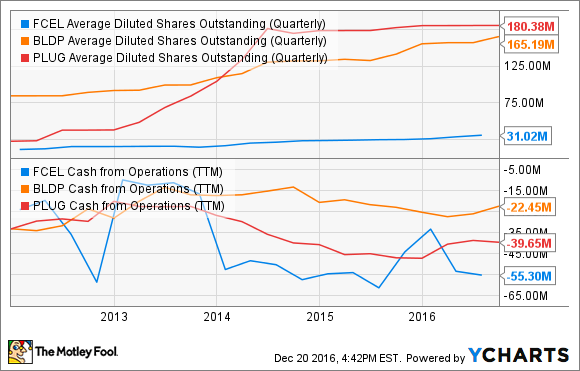 An increased share count isn't inherently bad, but if it isn't paired with an improving financial situation, there's only so much time investors will give management to turn around a company.

Tax credits won't be a tailwind

If you thought fuel cell economics were tough in 2016, they're going to get worse in 2017. The investment tax credit that has provided a 30% tax credit for investment in fuel cells was not extended, though parallel credits were extended for wind and solar energy, which effectively means fuel cells will be about 43% more expensive next year.

When it filed its initial IPO paperwork, Bloom Energy essentially said an extension of the subsidy would be required for it to go public. So, tax credits were a key to the industry's near-term viability, and now they're gone.

High potential, but not a mature market yet

Fuel cells, particularly those burning hydrogen, have a lot of potential to upset the energy industry as we know it. They could help make transportation and electricity consumption cleaner, and disrupt trillions of dollars of spending each year. But so far, they aren't low cost enough to survive on their own, and the companies involved haven't shown the ability to build a sustainable business model. Until they do, this is an industry I just can't invest in, no matter how big the potential is.