TASER International, Inc. (NASDAQ:AAXN) had a great 2016 operationally, expanding its Taser weapon business and growing the market adoption of body cameras and its attached cloud services. But heading into 2017 there are some risks worth watching. Here are a few factors that could cause the stock to fall.

The market opportunity may be shrinking

Fellow Fool Rich Smith has pointed out recently that TASER International has reached 97.5% of law enforcement agencies in the U.S. with its Taser weapons, and 91.5% of officers. That's an extremely high market penetration and may mean the business's best growth days are behind it.

The body camera business gets a lot of attention from the media and investors, and rightfully so, but Tasers still make up nearly 75% of TASER International's business. If that market is tapped out, the company may have a hard time growing into its lofty valuation (which I'll get to below).

When TASER International's stock struggled in 2016 it was because a competitor won an important contract. Safariland has been the biggest thorn in the company's side, winning a bid to supply New York City police officers with its Vievu body cameras.

TASER International has generated strong margins in Tasers, but it's really body cameras that investors are concerned about. The company has a high market share in the body camera market with its Axon, and service revenue from its Evidence.com subscriptions generates margins of around 80%. If competitors can win new body camera contracts around the world, it will eat into TASER's profit potential going forward and that wouldn't be good for the stock. Investors will be watching contract wins by competitors closely in 2017.

Expectations may be too high

TASER International has grown revenue 31.2% in the first three quarters of 2016, so it's no surprise the stock looks expensive on traditional metrics. But that also means the company has to hit those expectations or the stock will fall.

Below is a chart of the stock's price-to-sales and price-to-earnings ratio -- both are incredibly high. 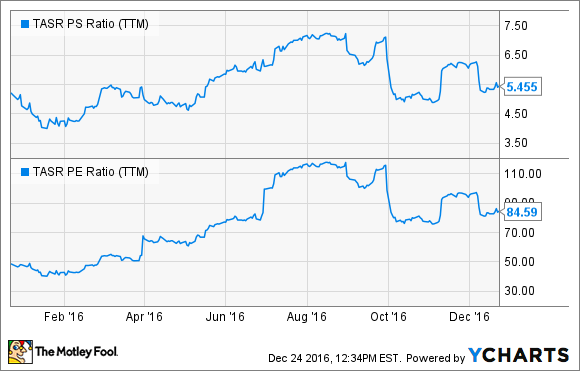 The P/E ratio is high in part because the company has been investing in research and development to create new products and in sales staff to sell those products. If the market opportunity plays out as hoped, the investment will pay off and the P/E ratio will come down quickly in the next few years. But if the market isn't as big as hoped or competition takes market share, the stock could appear more expensive and fall.

Right now, TASER International is seeing strong growth in all of its product lines and boosting backlog in the high-margin Evidence.com business. And with international markets just starting to be tapped, I think there's lots of room for growth. The risk factors above are worth watching, but this is a growth stock I'm still very bullish on right now.