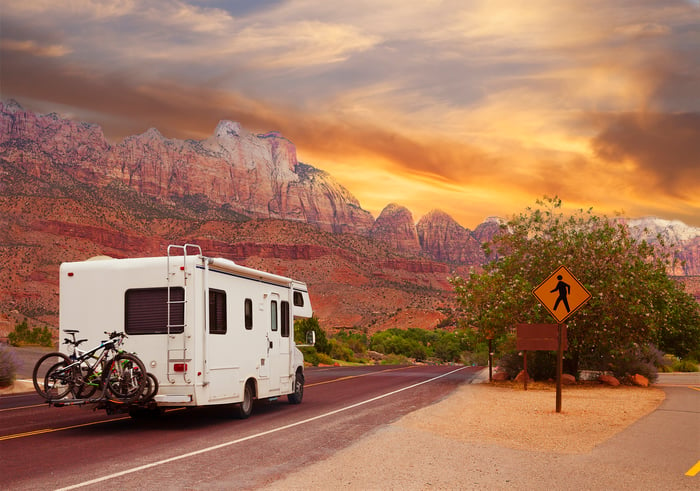 Winnebago Industries' (NYSE:WGO) 66% stock price gain during 2016 was the envy of most investors. Winnebago is a leading U.S. manufacturer of recreational vehicles (RVs) used primarily in leisure travel and outdoor recreation -- but most of you probably knew that already, because the company's brand is pretty much synonymous with RV camping. The good news for those who hold shares is that the stock's gains could certainly continue in 2017.

Roughly half of Winnebago's customers are 60-plus years old, and these demographics bode well for its business. The U.S. population age 65 or older is expected to grow 69% between 2012 and 2030, according to the U.S. Census Bureau.

What's interesting is that Winnebago is also seeing an uptick in demand from younger consumers, as Generation Xers and Millennials seek more outdoor experiences. In fact, the number of campers between the ages of 25 and 34 grew from 18% in 2012 to 23% in 2015, according to Winnebago.

Another favorable statistic is that 70% of current RV owners plan to purchase another at some point, according to research from the University of Michigan. And RV penetration in North America has consistently increased over the past 15 years: 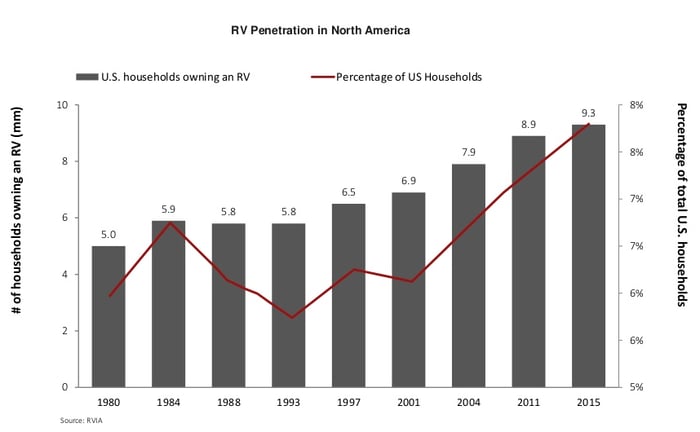 In early October 2016, Winnebago announced it would acquire Grand Design Recreational Vehicle Company. Grand Design is a manufacturer of towable recreational vehicles, and the deal was valued at roughly $500 million in cash and newly issued Winnebago shares.

This move makes a lot of sense for Winnebago and is expected to be immediately accretive to the company's growth, profit margins, and earnings per share, excluding transaction costs. This move accelerates Winnebago's expansion into what management calls an attractive towables market, and also combines the industry's fastest-growing brand (Grand Design) with the industry's most well-known (Winnebago). It also extends Winnebago's dealer network with little overlap, and will improve Winnebago's margins. Lastly, management anticipates annual run-rate cost synergies of $7 million phased in over three years.

Here's a look at how the combined company has performed recently: 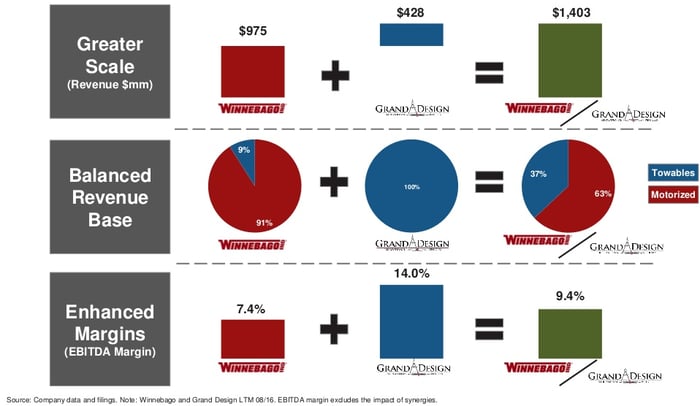 While the move was a good one for investors, it will increase Winnebago's debt-to-EBITDA ratio to 2.5 times after the transaction is completed. That means at some point management will focus on trimming that down; the goal is to hit 1.5 times by the end of fiscal year 2018.

While Winnebago will have a tough time matching this year's 66% stock price gain in 2017, there's no question that the company is well positioned with its brand and dealership network to take advantage of favorable demographics while it creates synergies with Grand Design. Per data from Morningstar, Winnebago is only trading at roughly 19 times trailing-12-month earnings, which is cheaper than the industry average; it's also trading cheaper than the industry average for price-to-book and price-to-sales (TTM), suggesting it isn't overvalued and could have room to run in 2017.

Can This Top Recreational Stock Drive You to Big Gains in 2017? @themotleyfool #stocks $WGO Next Article
Current