Amazon (NASDAQ:AMZN) Prime already has a slew of enticing perks that come with its $99 annual membership fee, from Prime Video to streaming of over a million songs through Prime Music, unlimited photo storage through Prime Photos, book borrowing through Prime Reading and, of course, free two-day shipping on millions of items from Amazon.com -- that is, to name a few of the most popular.

But if recent reports are correct, Amazon might soon take a huge step to further bolster Prime's value proposition with live sports. 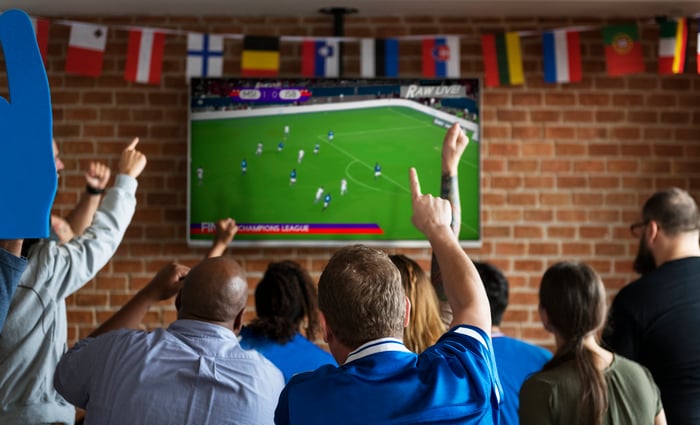 WSJ's sources also elaborated that Amazon is looking to use those rights to create an exclusive premium sports package to include with Amazon Prime, but only "with [..] some leagues, including the NBA." And similar to the way users can subscribe to Prime Video as a stand-alone service for a monthly fee, Amazon could hedge its bets by creating a more focused, stand-alone bundle of live online sports channels.

It's tempting to worry that Amazon is entering a crowded market. This past April, for example, Twitter (NYSE:TWTR) not only expanded its partnership with the NBA to bring exclusive live NBA programming to its site, but also struck an exclusive partnership with the NFL to deliver an over-the-top digital stream of 10 Thursday Night Football games during the 2016 season.

Then in June, Twitter live-streamed this year's Wimbeldon tennis tournament. And in July, it announced a new live-streaming partnership with MLBAM to stream out-of-market games from both the MLB and the National Hockey League (NHL), as well as a new live nightly multisports highlights show called "The Rally" produced by over-the-top content network 120 Sports.

In fact, Twitter's ambitious efforts to build its sporting prowess likely helped it attract the attention of ESPN majority owner Disney (NYSE:DIS), which reportedly worked with a financial advisor in recent months to evaluate the budding social media platform as a potential acquisition target.

Disney, for its part, only recently invested $1 billion for a 33% stake in video streaming leader BAMTech earlier this year, all with the aim of launching its own direct-to-consumer ESPN-branded subscription streaming service. And that's not to mention ongoing competition from the usual pay-TV providers that industry watchers suspect such streaming packages are meant to disrupt.

Still in the early innings...

This also shouldn't be entirely surprising. Earlier this year, reports surfaced that Amazon was in talks to acquire streaming rights to several less prominent sports leagues encompassing the likes of tennis, soccer, and auto racing, which all boast limited audiences in the U.S. but simultaneously enjoy enormous appeal to international viewers. In retrospect, that move makes perfect sense considering Amazon only announced two weeks ago that it has officially expanded Prime Video availability to customers in more than 200 countries and territories around the world.

If the latest reports have merit, the difference now is that Amazon appears to be chasing higher-profile sports streaming rights in addition to those niche interests. As such -- while competitors like Twitter are primarily dabbling with limited content such as its 10-game deal with the NFL -- it seems Amazon is more seriously positioning itself as a viable one-stop shop for consumers' sports-viewing desires.

Make no mistake, that would be a massive value-add for tens of millions of current and prospective Amazon Prime subscribers, which in turn would serve to bolster Amazon's growing ecosystem of products and services. Meanwhile, a stand-alone sports streaming service could serve as a lucrative supplementary source of revenue.

For now, though, the scope of that revenue opportunity remains to be seen. And sports-hungry investors and consumers will need to hurry up and wait for more details on exactly what Amazon is planning. But if one thing seems sure, it's that few other companies are as capable of shaking up the live sports industry like Amazon can. And as the company continues to expand its reach, it will also continue to become a more indispensable part of our lives.