Who sold the most wrist computers?

The wearables market isn't growing as analysts originally anticipated. Last quarter, unit sales across the entire market grew just 3% year over year, according to IDC. That's quite a slowdown from the first quarter of the year, when wearable unit sales increased 67%.

Part of the slowdown in sales may have been the anticipated release of the Apple (AAPL 2.45%) Watch Series 2, which delayed some purchases into the fourth quarter. Smartwatch sales in general lagged in 2016, as simpler fitness trackers like Fitbit (FIT) devices continue to grow.

Here are the five best-selling wearable device brands of 2016, based on data through the first three quarters. 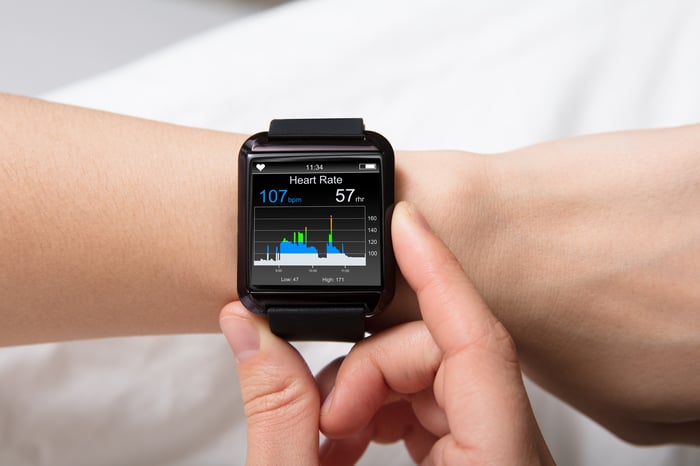 Fitbit's brand is synonymous with fitness trackers. Its strong brand, combined with the company's wide lineup of devices with varying functionality and price points, allowed it to dominate the wearable market in 2016. Through the first three quarters of the year, Fitbit sold 15.8 million wearable devices, according to data from IDC Research.

Fitbit released several new devices in 2016. It launched its Alta and Blaze lines in the first quarter. Both sold extremely well through the first three quarters of the year, accounting for the majority of Fitbit's revenue in the first half of the year. In the third quarter Fitbit added refreshes of the Charge and Flex devices to its lineup, bolstering unit sales 11% for the quarter.

Some of Fitbit's biggest opportunities for growth are abroad. It's growing well in Europe, as CEO James Park points out. "The population of the five largest countries -- Germany, France, the U.K., Italy and Spain -- equals the approximate size of the U.S., but less than 15% of our total devices sold today," he told analysts on Fitbit's third-quarter earnings call. Fitbit has struggled to penetrate the large market in Asia, though.

Xiaomi may be to blame for Fitbit's struggles in Asia. The Chinese electronics maker released an update to its Mi Band this year to include a heart-rate sensor and a few other upgrades, and it's managed to keep the price point below $20 (in U.S. dollars) in its home country. For reference, Fitbit's average selling price was $93 last quarter.

Xiaomi's dominance is mostly confined to China, where it also holds a substantial share of the smartphone market. Xiaomi is working to extend its brand throughout Asia, particularly in large emerging markets like India. The company should continue to dominate the low-end wearable device category in the region, as it uses inexpensive wearables to improve its brand recognition.

Garmin (GRMN 1.26%) offers a range of wearable devices catered toward specific sports like golf, swimming, and cycling. It also offers generic fitness trackers like many of Fitbit's or Xiaomi's, as well as high-end smartwatches like the Apple Watch.

Garmin is also expanding developer support for its Connect IQ app store. Its high-end devices, like Apple's, benefit from the additional functionality offered by third-party support. As Garmin expands its number of smartwatch designs and the number of apps in Connect IQ, smartwatches should continue to grow as a share of the company's wearable sales.

It took over a year for Apple to refresh the Apple Watch, and that ultimately cost it in sales. Sales declined 57% in the second quarter and 71% in the third quarter, after lapping the April 2015 launch of the original Apple Watch. The release of the Apple Watch Series 2 at the end of September was unable to save third-quarter sales; the smartwatch leader sold 1.1 million units in the third quarter, according to IDC.

CEO Tim Cook responded to IDC's report by telling Reuters, "We're on track for the best quarter ever for Apple Watch." While he didn't provide any exact sales figures, he said, "During the first week of holiday shopping, our sell-through of Apple Watch was greater than any week in the product's history." (Sell-through is a measure of how many units actually reach consumers, instead of just store shelves.)

If Apple does indeed have its best quarter ever of Apple Watch sales, it will (based on IDC estimates) sell over 4.1 million units.

Samsung (NASDAQOTH: SSNLF) managed to grab the fifth-place position in 2016. Its Gear S2 smartwatch differentiates itself with built-in cellular connectivity, so it doesn't need to be connected to a smartphone to access internet-enabled apps.

Samsung also benefited from bundling its newest Gear Fit model with its line of smartphones, including the Galaxy Note 7. Despite the recall of the Note 7, customers were able to keep their discounted smartwatches, which inflated unit sales somewhat.

Low-end devices like the Gear Fit, which compete with Fitbit devices, accounted for all of Samsung's unit growth in the third quarter.

Smartwatches have fallen out of favor recently as basic wearables pick up the slack. IDC expects the market to more than double by 2020, and smartwatches could play a major role in that growth.

Two main factors will impact the growth of smartwatches over lower-end fitness bands. First, the introduction of cellular connectivity in more devices will make them more useful as independent devices. Second, the growth of third-party developer support will produce functionality that exceeds simpler fitness bands.

All five companies listed here are poised to take advantage of further growth in smartwatches if and when they take off, but Apple lacks a low-end fitness band to protect against a lack of consumer interest in that market segment.