2017 is almost here, and with it will come a new president -- and perhaps a new era of rapprochement between Russia and America.

Already on Russia's composite stock exchange, the MICEX, shares of Russian companies have soared 14% since the U.S. presidential election in anticipation of a thaw in relations. Now, analysts at Credit Suisse are singling out one Russian company for particular attention.

This morning, Credit Suisse announced that it has initiated coverage of Russian search giant Yandex (NASDAQ:YNDX) with an outperform rating. 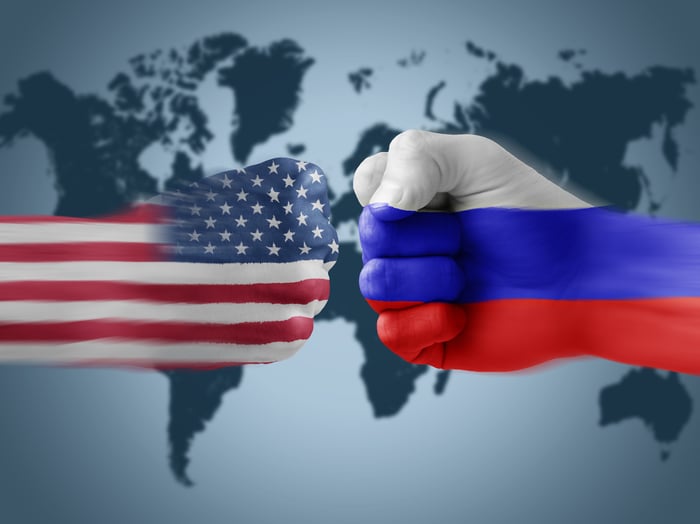 Russia and the U.S. have been at loggerheads for years. That could soon change. Image source: Getty Images.

StreetInsider.com broke the story on Credit Suisse's initiation this morning. So far this year, Yandex stock is up 31%, but Credit Suisse expects the company to continue growing strongly, alongside earnings that the company forecasts will grow at better than 20% annually over the next three to five years.

How much more could the stock grow? Credit Suisse believes that Yandex stock that sells today for about $20.40 a share could hit $26 within a year -- which would make for about a 27% profit from today's prices.

How likely is that to happen -- both the earnings growth (more precisely, EBITDA) and the growth in stock price? That's hard to say. Even Credit Suisse admits that Yandex's profit margins are "weak." Last quarter, profits per diluted share fell by nearly 43%, and over the past 12 months, earnings are just $0.41 per share. Weighed against the stock's $20.40 price, that works out to a price-to-earnings ratio of nearly 50.

Is 50 times earnings a fair price to pay for just 20% annual earnings growth, even assuming Yandex can grow that much? I rather doubt it. Granted, Yandex does generate a lot of cash -- about $270 million in positive free cash flow over the past 12 months. Thus, its price-to-free-cash-flow ratio is only 24. But even this valuation method suggests that 20% growth may be insufficient to justify the stock price.

Long story short, while I certainly understand Credit Suisse's eagerness to seek out potential bargains in Russia -- stocks that could benefit from a warming of relations between Russia and the U.S. -- I must admit: I have my doubts that Yandex is the right stock to pick.

Bonus thing: Something better to buy

So where else might an investor look? How about Qiwi plc (NASDAQ:QIWI)? A sort of Russian riff on PayPal, Qiwi is big player in money transfers within the Russian Federation, and has operations spread out as far as Kazakhstan, Belarus, Romania -- and even the UAE.

Like Yandex, Qiwi has been hurt badly by sanctions against Russia, but unlike Yandex, this damage has left Qiwi stock trading at a price low enough that it might conceivably give an investor a chance to make a profit.

According to data from S&P Global Market Intelligence, net income at Qiwi approaches $62 million, which when compared to the stock's $777 million market capitalization yields a P/E of only 12.6. The price-to-free-cash-flow ratio is even better -- about 7.8. And with Qiwi sitting on $293 million in cash and short-term investments, more than a third of the stock's market cap is backed up by cold, hard cash.

Granted, analysts don't see Qiwi growing anywhere near as fast as Yandex -- its projected growth rate is only 14.5% -- but at these prices, Qiwi still looks to me like a better bet than Yandex.

Before Trump Takes Office, Yandex Gets a Buy Rating: What You Need to Know @themotleyfool #stocks $YNDX $QIWI $PYPL Next Article
Current