Image source: Bank of the Sierra.

I've pointed out the stunning decrease in Sierra Bancorp's (NASDAQ:BSRR) non-performing loan percentage before. This important risk metric shows that Bank of the Sierra's loan balance sheet improved, but a statistic in isolation doesn't explain the specific reasons why it improved.

It turns out, Bank of the Sierra has reduced its risk greatly over the past five years based on a combination of factors; some of them under their control -- such as changing its loan mix and diversifying geographically --  and others that amount to good luck -- the local economy in its markets improved. Currently, the largest risks to their profitability come from their commercial real estate (CRE) loan portfolio and the economy in the areas where these loans are located.

During the Great Recession, many of Sierra Bancorp's loan categories were in trouble. But the poor performance of CRE loans was not nearly as bad as small business administration (SBA) or construction loans. Commercial real estate loans most likely performed better because the loans were made to more established businesses. The Small Business Administration notes that 50% of small businesses fail in their first 5 years. After surviving more than five years, a growing company might opt for a regular commercial loan instead of an SBA loan. Construction can be speculative as well. The construction  loans that succeeded regularly fed into the CRE category when work was completed. This addition of successful and more mature loans helped to make CRE loans a better performing category.

To improve loan quality, Sierra Bancorp loaned out more money to CRE while reducing construction and SBA loans. SBA loans disappeared completely, as you can see from the charts below. 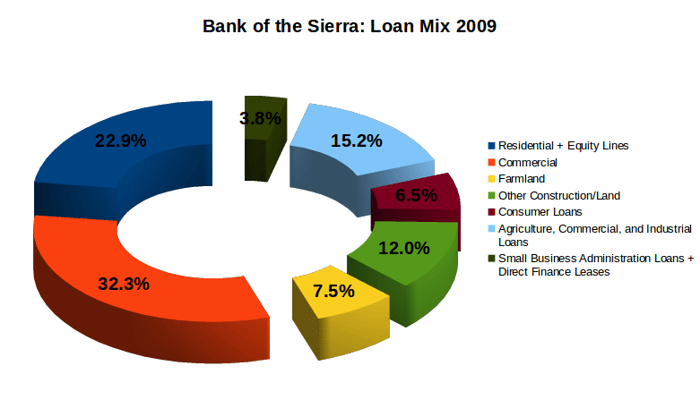 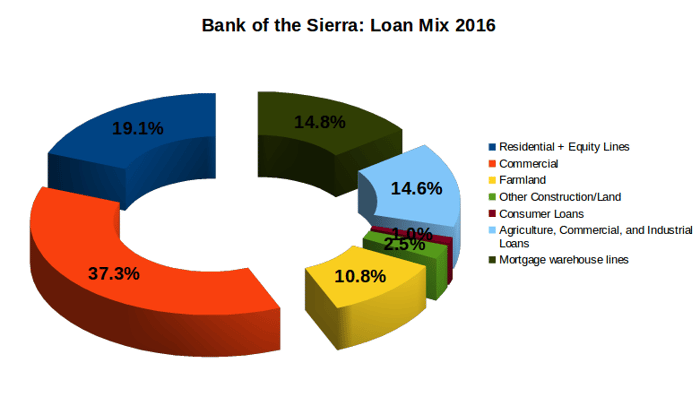 Looks good so far, but how risky are those CRE loans? Without the pipeline of successful construction loans, might they be riskier? Plus, they now make up a larger percentage of BSRR's loans, so they have a larger effect on its profits. Here is a chart of their CRE portfolio matched with the percent of poorly performing loans: 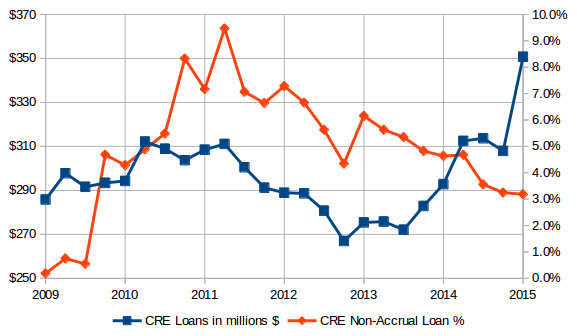 Prior to 2009, CRE performed well. In 2009, the percent of bad CRE loans shot up. BSRR stopped growing the CRE segment the next year and began reducing it in 2011. The number and amount of CRE loans continued to fall until poorly performing CRE loans sank below 5% in 2013. Clearly this improvement was a signal to Bank of the Sierra's management to start writing more CRE loans again. You can see that the blue line indicating CRE loan volume surges in response to better performance.

Currently, only 0.3% of the Bank's CRE portfolio is performing poorly.  Ideally this percentage is below 1%. The substantial improvement in the percent of troubled loans, from 5% to 0.3%, corresponds with another large increase in approved loans. The total value of CRE loans is now almost $468 million, a 34% increase from the end of 2015. But what caused the improvement in loan quality and what are the risks going forward?

Risks from oil and agricultural commodities

For a regional bank, local economic conditions can affect earnings more than larger national issues. Bank of the Sierra is located in California's Central Valley, which grows a wide range of agricultural products that are shipped around the world. Low crop prices and persistently high unemployment (compared to metropolitan San Francisco and L.A.) are the largest risks to bank profitability in the area. If debtors can't pay their loans, obviously that's not good for their bank.

Agricultural commodities are on the low end of an 8 year cycle right now. Low demand and higher than average supply has impacted farm earnings across the board: 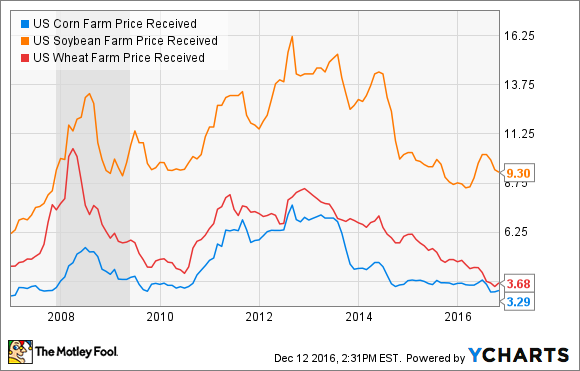 The outlook for agriculture is flat for 2017, with no uptick in sight. However, the industry appears to be at the bottom of a standard cycle of crop prices. In general, supply is higher than demand but this situation can't remain for very long. People have to eat. I hesitate to say this will drag on BSRR's growth in the coming year, because much of California's produce is high value unique and organic products. But it sure isn't helping.

Kern County, one of the counties where BSRR's customers are located, is also home to three-quarters of California's crude oil production. Thus, the lower oil prices of the past few years have also been a drag on the regional economy.

Luckily for Bank of the Sierra, these headwinds have all been diminishing over the past year. Area unemployment is down markedly since the Great Recession, as the following graph displays: 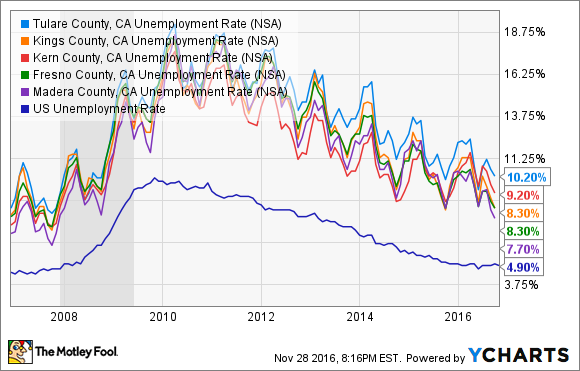 Additionally, oil prices have been trending gradually upward. OPEC has kept output up and prices low for a few years to maintain market share and put pressure on new U.S. shale oil production. In late November, OPEC agreed to cut oil production to keep prices high. Over the past weekend, more oil producing countries agreed to do the same.

High oil prices help all oil producing regions, including those in the California Central Valley. Bank of the Sierra doesn't benefit directly from this, but its customers do. When customers have more money, they're more likely to pay their loans on time. Accordingly, this development in oil has provided a further boost to Bank of the Sierra's balance sheet, reducing the risk of future loan defaults. In the short-term, agriculture may not be helping BSRR's profits much but oil should.

How Sierra Bancorp is reducing these risks

To hedge against these commodity risks in the local economy, the bank has been broadening its geographic footprint. In 2014, it acquired Santa Clara Valley Bank , which extended its reach south into neighboring Los Angeles County. In 2016, it expanded west by acquiring Coast National Bank in San Luis Obispo County .

Both of these counties have lower unemployment rates than Sierra's traditional territory. This is because they have different economies that were less affected by crop and oil prices than the Central Valley was. 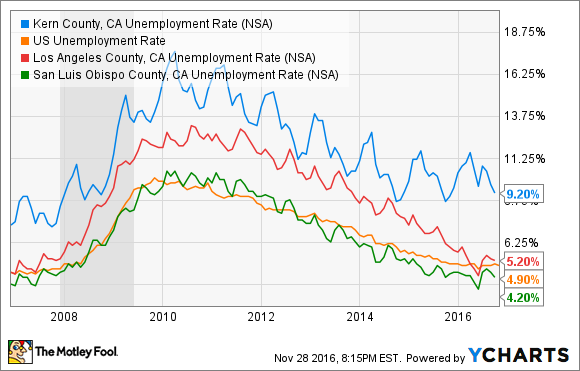 This geographic diversification will help Bank of the Sierra keep its non-performing loan rate low by spreading out risk across a variety of local economies, and it may provide a boost to its interest income. Of course these expansions introduce new risks from different sectors of the economy. San Luis Obispo County has lower than average job growth due to an older population. Retail trade and government are some of the largest employers in the region. Accordingly, average wages are also low.

Los Angeles County has a more diverse economy with leading companies in entertainment, manufacturing, international trade, and tourism. The local healthcare industry is also expanding, as it is around the country. A downturn in any of these industries could affect BSRR's loans in this area. But because of the size and diversity of the total economy in this region, the impact would be less than the effect that downturns in oil or agricultural prices have historically had on the bank's balance sheet.

A larger risk might come from a decline in home prices in the region due to a housing bubble potentially forming in California's growing cities. Prices increased recently, pushing new homebuyers to the outskirts. . A more rural commercial bank like Bank of the Sierra is less vulnerable to this than others, but it is still a risk.

Regional bank investors should watch Bank of the Sierra's 2016 10-K and Q1 2017 10-Q reports for any performance boost related to this year's acquisition of Coast National Bank. If that appears, look for shares to move higher in the short-term. Consider buying BSRR if the purchase improves profitability and crude oil prices remain above $50 in the new year.