On Dec. 16, almost 98% of Trina Solar Limited (NYSE: TSL) shareholders voted to approve the company's going-private plan, whereby current public shareholders will receive $11.60 per share from a group that includes the company's CEO. The parties are now working on completing all of the other requirements, with a goal of completing the plan during the first quarter of 2017.

Usually by this stage, deals like this are almost certain to close, and the market price of the shares will rise toward the offer price, but in this case the share price has dropped since the vote occurred. So what gives?

Why the market is concerned about the deal

At its recent closing price of $9.48 per share, Trina Solar is trading at a 22.5% discount to the net proceeds to shareholders once the transaction closes. This represents a potentially large return in as little as three months for new buyers, which is a strong indication that the risk the transaction won't close is perceived to be much larger than usual. Let's look at a couple reasons why.

First, Trina Solar is a Chinese company whose shares trade on the NYSE. The group that's taking the company private thus needs to get approval from its own government regulators, a task that may have become more challenging recently. In late November, Bloomberg reported that the Chinese government was looking to curb large deals involving overseas acquisitions, after a buying spree by Chinese companies over the past year.

The government is also expected to restrict the use of onshore capital in take-private transactions such as the one Trina Solar is contemplating. These measures are probably being put in place to reduce pressure on the Chinese renminbi, which is down about 6.5% against the dollar over the past year. 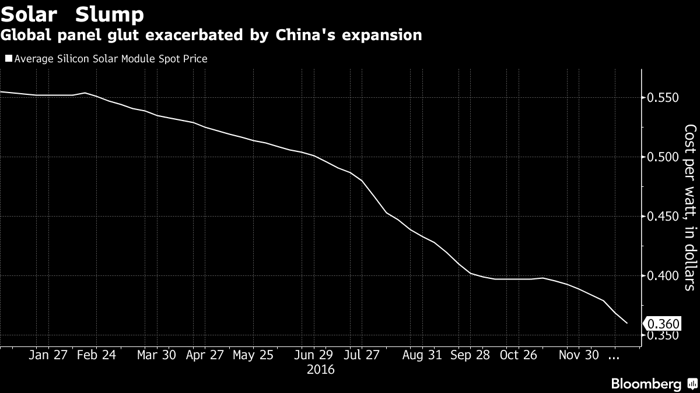 The other problem for Trina Solar is the state of the solar module market itself. Overcapacity has led to a severe 35% drop in module prices since the beginning of the year, much of which has occurred over the past quarter. While module manufacturers have been good at lowering their expenses, the speed of the drop this past quarter is going to severely pressure margins for everyone. Even Trina Solar, which has been one of the low-cost manufacturers, is likely to report a loss for the fourth quarter. That means the stock could be primed to fall if the deal fell through for any reason.

While concerns about the deal are well founded, odds are still in favor of its getting completed, even if the timing stretches out a couple of extra months. To begin with, the company probably would have cancelled or delayed the vote if they didn't have reason to believe that they'd manage to get approval from regulators. While the entire company is being bought for about $1.2 billion, the CEO and his merger group already own a significant portion of the shares -- at least 11% to 12%, based on the last annual report -- lowering the amount of Chinese capital that will actually leave the country.

In addition, the $11.60-per-share price is about 5% less than Trina Solar's most recent book value per share of $12.32, indicating that the buying group is getting a good deal. The company also generates over 50% of its sales overseas, thus bringing capital back into the country, so it's also likely that regulators will be happy to eliminate foreign ownership and allow future profits to accrue to Chinese owners in full.

Overall, the potential return between today's stock price and the buyout offer price probably outweighs the risks in this situation. On the other hand, there are better alternatives in the solar sector for those with a longer investment horizon.

Trina Solar Is Going Private, but the Market Seems to Think It Won't Happen @themotleyfool #stocks Next Article
Current