Dick's Sporting Goods (NYSE:DKS) and Big 5 Sporting Goods (NASDAQ:BGFV) have both had a great 2016. As far as stock performance goes, Big 5 is the winner this year. But which company is in better shape for the new year? 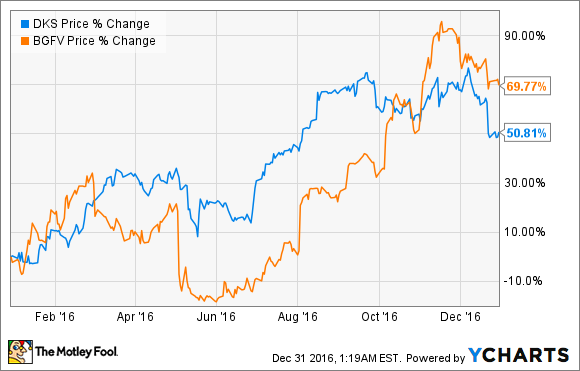 Riding a wave of positive news

Both companies have benefited during the past year from a couple of positive developments. First up, the now ironically named Sports Authority went out of business. The former competitor entered bankruptcy anticipating reemerging a stronger business. That didn't happen, and no savior stepped in to rescue the failed retailer. A fire sale ensued, and the company's stores shut down, leaving remaining sports merchandisers to pick up the pieces.

In addition to that development, consumer spending on sporting goods rose during the year. According to the U.S. Census Bureau, sales of sports merchandise rose 3.7% over 2015 through the end of November. Those two factors contributed to both companies, posting positive sales growth even as brick-and-mortar retail, in general, struggled this year. 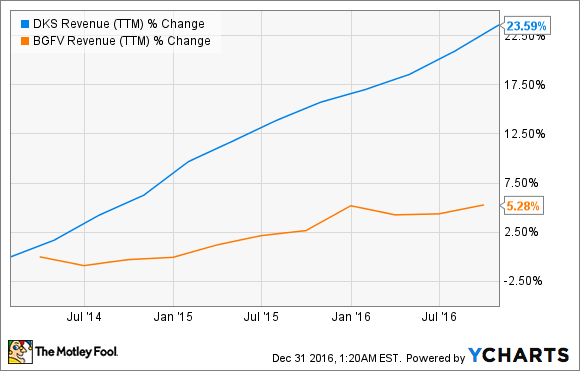 The undisputed king of sports-only merchandising

Dick's Sporting Goods, now by far the largest sporting-goods retailer in the U.S., posted an 8.1% increase in revenue through the third quarter of the year. The top-line figure was driven by a net 38 new stores over the same time last year, as well as 2.9% comparable-store sales growth.

Dick's was a big winner during the Sports Authority bankruptcy. The company used the opportunity to pick up the rights to 31 of the former Sports Authority store leases, intellectual property that included the old website, and customer lists. The intellectual property was acquired for $15 million and the store leases for another $8 million. The company has decided to keep 22 of the 31 leases and is now in the process of converting them into Dick's Sporting Goods stores.

Also of note was Dick's purchase of the small Golfsmith chain, which also declared bankruptcy earlier this year. The intellectual property, 30 locations, and inventory was purchased for $43 million. Dick's is currently operating those 30 Golfsmith stores but will convert them to its own Golf Galaxy brand by the end of the current quarter, pushing the total count to over 100 locations.

A smaller player on the mend

Big 5 Sporting Goods is a much smaller chain by sales and number of locations -- only 432 at last count, to Dick's 782. Predominantly located in the western U.S., Big 5 also got a boost from the closing of Sports Authority. Of greater help, though, was the shutdown of California-based regional retailer Sports Chalet earlier in the year.

Big 5 has especially seen improvement in sales as of late, with a 3.3% rise in the third quarter driven by a 6.8%% increase in comparable-store sales. Expenses as a percentage of revenue also decreased, as the company has used the positive momentum to pay down debt. Interest expense fell 25% during the last quarter, and the company has increased its profit margins on merchandise.

Management reported that the strong sales trend was continuing so far in the current quarter, with comparable-store sales still in the high single digits over last year. In light of its strong performance this year, Big 5 recently raised its quarterly dividend for a second time this year, making its quarterly payout a whopping 50% more than it was at the start of 2016.

Even after its big 70% run-up in price this year, Big 5 still sports a 3.4% annual dividend yield thanks to its board of directors' generosity. That makes the company a compelling consideration for investors seeking income.

Dick's Sporting Goods, though, set itself up in the past year for real future growth. It was able to capitalize on the demise of several competitors and snag some of the old business. The company also has several specialty store concepts going for it, including the aforementioned Golf Galaxy as well as Field and Stream, not to mention an online store that's been growing sales by double digits the past few years.