Hypocrite ... a person who acts in contradiction to his or her stated beliefs or feelings.

I've made no bones about the state of the offshore drilling industry being pretty awful. And pretty much any time I've written about the industry or its companies, I've suggested investors would be best served avoiding the lot. Yet I recently decided I was ready to stop taking my own advice, and opened positions in Atwood Oceanics, Inc. (NYSE:ATW), Ensco plc (OTC:VAL), Noble Corporation (OTC:NEBLQ), and Transocean Ltd. (NYSE:RIG); I also added to my beaten-down holding of Seadrill Ltd (NYSE:SDRL).

Have I changed my mind on offshore oil? Not exactly -- as a matter of fact, 2017 is lined up to potentially be even worse than a decades-low 2016 in terms of drilling activity.

So what has changed, and why did I decide to invest now? Let's take a closer look at my reasons, as well as reasons it may be prudent for many of you reading this not to follow my lead. I promise I'll explain.

Offshore drilling remains abysmal, but progress has been made on rig oversupply

Let's get this out of the way: Offshore activity levels are very low, and there is still a substantial oversupply of working vessels still either in the water, or stacked and ready to be brought back online. According to National Oilwell Varco, Inc., one of the biggest suppliers of equipment for offshore drilling, global utilization of the offshore drilling fleet was 62% in 2016, the lowest level measured in 16 years. This was the case even with the global offshore drilling fleet reportedly reduced by 151 net rigs (though only 50 of those were retired, with the balance cold-stacked).

And it very well could get worse before it gets better. Capital spending in the sector is set to fall again in 2017, marking a third consecutive annual decline in offshore investment. What little new work there is to be had will be fiercely competitive, as companies fight for whatever cash flows they can generate to stem losses and make it through the trough in the cycle.

Factor in that much of the world's offshore oil is located in deepwater, harsh environments, and very deep under the seabed, and it's likely that scrapping activity will only pick up from here as a large portion of active vessels cannot operate in these environments.

So why these drillers?

It's reached a point where the opportunity, to a large degree, outweighs the risk. These stocks have all gotten potentially very, very cheap: 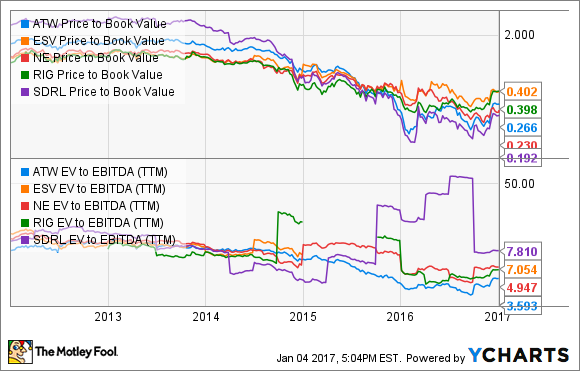 This could work out to paying nickels on the dollar value of these companies' assets when offshore recovers, and I'm willing to accept the risk of dilution to raise capital, or even one or more of these companies not surviving, because of the potential returns.

Factor in balance sheets that are generally in decent shape -- even with some pretty substantial debt loads in a couple of cases -- and I'm willing to take on the risk that these five companies will make it through the worst of the downturn and come out the other side: 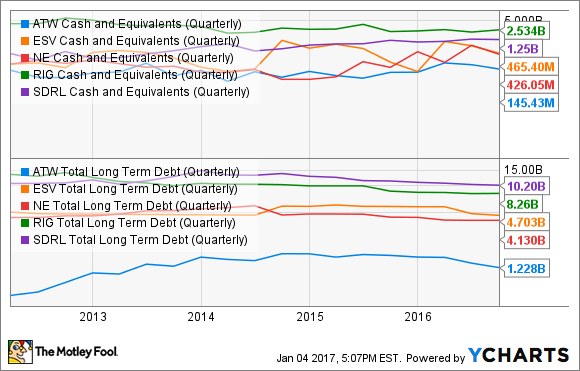 And while Atwood Oceanics, Ensco, and Noble may not have the cash balances of Seadrill and Transocean, they do have substantial revolving credit facilities available for short-term capital. Atwood has $615 million available, while Ensco and Noble have $2.2 billion and $2.45 billion available, respectively, and far smaller debt loads.

Seadrill CEO Per Wullf said this on the most recent earnings call:

Oil companies continue to be focused on preserving cash, in some cases consciously allowing the decline rate on producing fields to accelerate as a result of reduced infill drilling and well intervention. Based on the past years of underinvestment and the forecast for 2017, it is expected that decline rates will continue to accelerate. The longer the period of underinvestment and accelerated decline persists, the more new projects and infill drilling will be required to replace this lost production.

In other words, when offshore drilling does recover, the companies that survive the downturn will be in very good shape.

I have no idea when offshore will recover, and I'm certainly not calling a bottom on these offshore drilling stocks. It wouldn't surprise me at all to see them fall from here at some point in 2017.

But that's not what matters the most to me. The math makes it clear that at some point in the next couple of years, the offshore market will recover -- and I'm prepared to ride it out, even if that means short-term losses on paper before the recovery. As a matter of fact, in the right circumstances, I could see myself buying even more of these companies, but the bottom line is: I'm fully prepared to be wrong, and lose money permanently.

What about you? Well, if you're not prepared to ride out the volatility, or the risk of permanent losses, then it's probably best if you just keep taking my old advice and stay away from offshore drilling stocks.

I Bought These Offshore Drilling Stocks After Telling You Not To: Here's Why @themotleyfool #stocks $RIG $SDRL $NEBLQ $VAL $ATW Next Article
Current