This time last year, I was still starry-eyed from my recent engagement, full of hope and nervous excitement for the future. Not surprisingly, that lent a rather optimistic tone to my 2016 resolutions. Thinking back on it, I cannot help but chuckle at my own hubris, because only hubris could lead someone to believe that they can plan a wedding, get finances in order for two people, assemble a sizable stock portfolio, and eventually get married, on top of everything else in life. 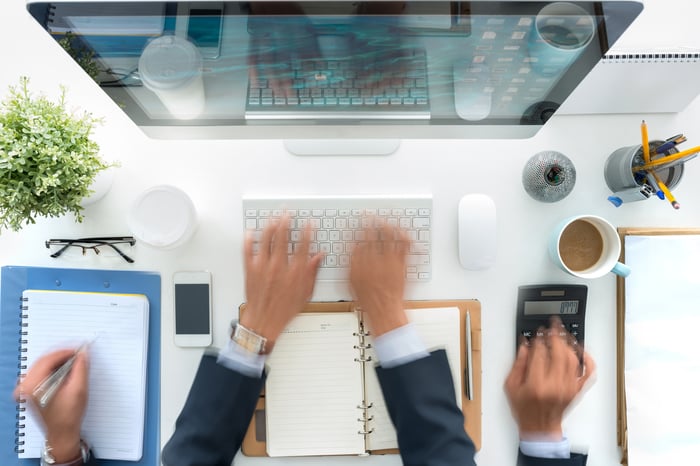 So this year, I am breaking things down into bite-sized portions with a quarterly approach that will allow me to reassess my progress every three months -- and better hold myself accountable -- before moving onto the next step. And with that in mind, my resolution for 2017 is to declutter my life.

The best-laid plans of mice and men . . . went awry

But before I get into my game plan, let's look back at exactly how things shook out last year. On one hand, my fiancée and I did manage to tie the knot, and thanks to the hard work we (read: my wife) put in during the early stages of planning, we were able to hit our original wedding budget right on the nose! And that was after being tempted plenty of times, both by convenience and necessity, to let go of the reins and just forget the budget entirely.

We are still grateful that the wedding went off without a hitch. On the other hand, all of the time and effort that went into making our big day so perfect came at the cost of . . . the other resolutions.

Those romantic walks I envisioned, the ones where we would debate the bull and bear case of companies like Whole Foods and Under Armour -- they never materialized. I made this wonderful plan for us to invest as a couple, all without really asking if my partner could manage it on top of her already hectic schedule. Ultimately, when you have just months to coordinate your wedding and a few decades to worry about retirement, the near-term commitment takes priority.

To avoid repeating this mistake for another year, we decided not to tie all of our resolutions to each other, thus avoiding the complexities that come with that. Instead, we would be taking more individualistic approaches toward a common goal.

This growing pile of stuff is just the tip of the iceberg.

That is why I now stand face to face with my first step to decluttering in 2017. In the past 10 years, I have moved eight different times. Combined with my mild hoarding tendencies, I have managed to accumulate a lot of stuff in my life. But I am finally coming to terms with the fact that no, I will never need the receipt and packaging for that item I purchased three years ago, or maybe I should get rid of my second road bike since it has been sitting neglected for years in my parents' garage.

Otherwise, between eBay, Facebook, Etsy, and Craigslist, I have plenty of options to list any items for sale. Even taking more conservative estimates on the value of my makeshift inventory, I can earn enough to make a sizable contribution to my savings. In fact, I put together a rough list of everything I would be able to throw out, donate, or sell, and it ends up being a major haul. Just in the first hour of digging through closets or drawers, I had a large trash bag filled to the brim with items to donate, which has the dual benefits of making space and reducing my tax bill.

Of course, all of this downsizing has additional benefits beyond freeing up the closets in my apartment. I was originally inspired to declutter after listening to the Rule Breaker Investing podcast. In one episode, David Gardner interviews David Allen, the business guru known for his Getting Things Done methodology. During the show, Allen touched on something that got me thinking:

Your head is a crappy office, and virtually everybody out there is trying to use [their] head as a way to keep track, as a way to be reminded, as a way to see relationships between priorities. And you cannot do that. Your head evolved over a million years to keep track of about four things you couldn't finish when you thought of them in the moment. That was it.

As it turns out, decluttering has been on my mind for many months now. Unfortunately, I have the bad habit of writing down goals, reminders, and ideas on whatever scrap of paper I have at hand, only to lose or forget about them entirely. But according to Allen, the key to getting the most out of these lists is to highlight the actions and next steps that will bring you closer to the results you want. That way, you get the thought (aka mental stuff) on paper and off your mind, and when it is time to follow up, you know exactly what it is that you have to do.

So while cleaning out my apartment is indeed my first priority for 2017, it is just one step toward the broader resolution of decluttering my life. If all goes according to plan, I will soon be turning my attention to my finances, looking at everything from the cable bill to credit cards and retirement plans.

Looking out even further, these efforts are part of a major milestone that my wife and I would like to pursue in the coming years. Knowing how much space we actually need and having enough savings put away will set the stage for us to eventually buy our first home together. Our real estate agent warned us that first time home buyers spend six to 18 months on average scoping out the market. And though our lack of experience in real estate makes this a daunting endeavor, at least my wife and I will have a clean, decluttered slate to get things started.

But then again, that could just be my hubris talking.