Free cash flow generation is the key to generating long-term value for shareholders, and there are three companies I'd like to look at that are planning on generating strong cash flow in 2017. First, Honeywell International Inc. (NYSE:HON) is set to significantly increase FCF in the coming years as it comes out of a period of high investment. Meanwhile, specialty materials and chemical product company Celanese Corporation (NYSE:CE) looks set to continue its remarkable transformation into a highly cash-generative operation. And finally, Boeing Co.'s (NYSE:BA) stock might sink or swim based on whether it meets its FCF guidance.

Boeing is cutting production of its 777. Image source: Boeing Co.

The reason? Honeywell is coming out of a period of elevated capital expenditures -- being made to generate future growth -- which has eaten into FCF generation. For example, the company's reinvestment ratio (capital expenditure over depreciation) is forecast to average around 1.6 in 2014-2016, when management believes a ratio of 1.2 is more normal.

However, capital expenditure is set to fall in the coming years, and the spending reductions, alongside earnings increases, will boost FCF generation. Management expects capital expenditure in the range of $1 billion to $1.1 billion for 2016 but sees it falling to the $800 million range in 2018. In other words, FCF is likely to increase by at least a few hundred million in the next couple of years, making Honeywell an attractive stock for investors who like cash flow.

This company's plans to increase cash flow are already bearing fruit. FCF has increased significantly in recent years, even as Celanese has been hit by weak end demand in its acetyl chain segment from China -- which deals in acetic acid and derivatives used in the paints, coatings, and chemicals industries, among others. 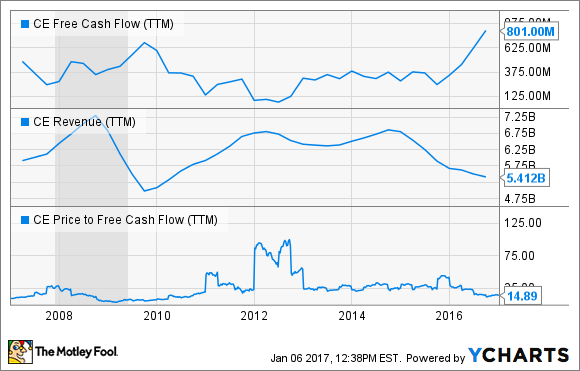 The stock looks cheap on a price-to-FCF basis, but there is a word of warning here. 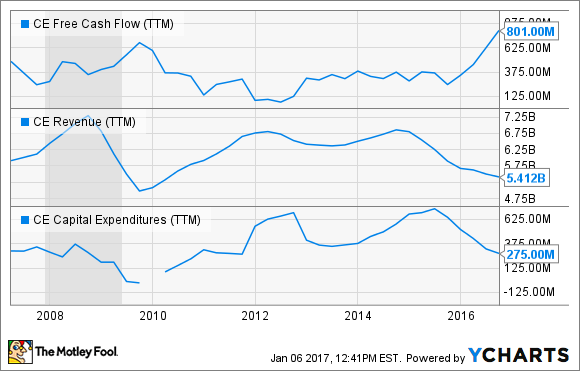 Nonetheless, Celanese management believes the productivity improvements and cost savings it's been making to deal with falling demand will hold the company in good stead in the future. CFO Chris Jensen expects FCF to exceed $850 million in 2016 (a record figure) and cumulatively reach $2.5 billion in the 2016-2018 period.

To put this figure into perspective, it represents more than 18% of the company's current enterprise value (market cap plus net debt). Moreover, analysts expect Celanese to return to growth in 2017, with consensus estimates for sales to increase 5.7%.

Boeing's FCF is a quandry: Analysts are divided on whether it will grow in the next few years, but management is clear that it expects FCF growth. For example, back on the third-quarter earnings call in October, CFO Greg Smith said "our view on cash flow growth is unchanged," adding, "We continue to forecast cash flow growth in 2017 and then 2018 and beyond."

In addition, on the same day that Boeing's management announced a production cut on its twin-aisle 777 jet -- a highly cash-generative aircraft -- to five a month, down from a rate of 8.3 a month in 2016, CEO Dennis Muilenburg said, "Boeing is well positioned to generate increasing cash flows."

The key question is whether declines in cash flows resulting from reduced 777 production and the increased costs of starting production on the 777X will be more than offset by increases in 737 production in the coming years. The other concern is that 777 production might be cut again -- after all, Boeing generated only 17 net orders for the 777 in 2016.

Here's a look at Boeing's FCF and operating cash flow over the past five years. 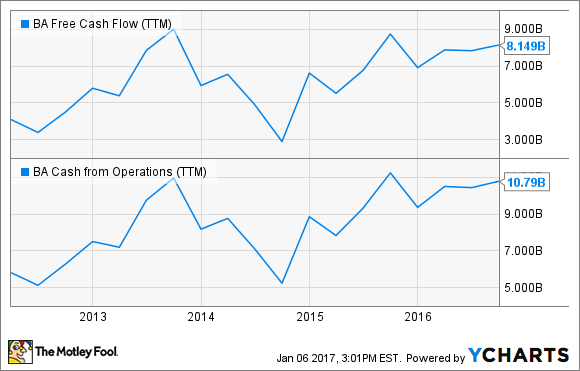 Smith expects annual operating cash flow to increase to $10 billion for the full year of 2016, compared with $9.4 billion in 2015.

Whether Boeing's cash flow increases as planned in 2017 could be the key driver of its stock price this year.

All three of these companies offer something for investors. Honeywell's underlying FCF improvements will start to come to the fore in the next year or so, and if Celanese can grow its top line again while maintaining good cash flow generation, then it will become a very attractive stock. Boeing simply needs to convince investors it can bridge the gap between the 777 and 777X while growing FCF.