Volkswagen AG's (OTC:VWAGY) this past week unveiled its latest show-car take on its classic Microbus in Detroit.

The I.D. Buzz Concept, as it's called, transforms the old icon's classic shape into something the original's hippie fans might have liked: a zippy all-electric minivan.

It's an appealing concept that drew crowds at the North American International Auto Show. But will VW build it? Here's what we know.

What it is: A show-car preview of a connected all-electric minivan

For now, the I.D. Buzz Concept is strictly a "concept," just for show. Some of its technology might not ever come to market -- and some that will come to market might not be working as intended to day.

But here's what VW said about it: The I.D. Buzz Concept is a dual-motor, all-wheel-drive battery-electric vehicle with 369 horsepower, a 111 kilowatt-hour battery, and a predicted range of about 270 miles on the U.S. Environmental Protection Agency's test cycle. The battery can be charged to 80% capacity "within 30 minutes" using a 150-kilowatt CCS charger. The Concept's floor-mounted battery and very long wheelbase (almost 130 inches) makes for an extremely roomy interior. 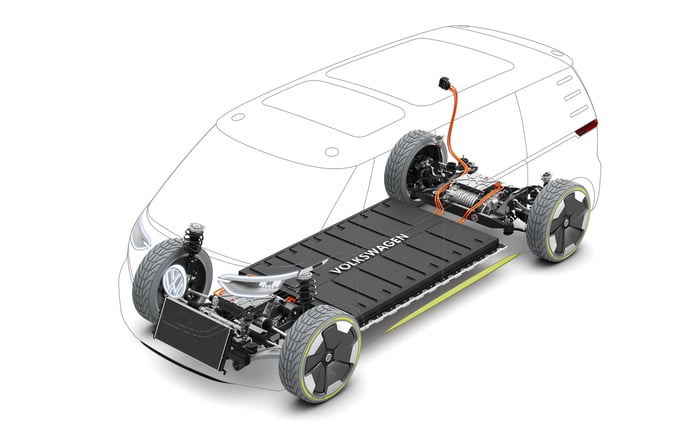 It also has a fully autonomous driving mode, called "I.D. Pilot." When engaged, the vehicle's steering wheel retracts into the dash, the ambient lighting inside the switches to a more "relaxed" hue, and the driver's seat can be turned 180 degrees to face the rear passengers.

Clearly, those are show-car gimmicks, at least for now. But they show how a self-driving VW might work, and self-driving production vehicles won't be flights of fancy for much longer.

VW said that the I.D. Buzz Concept is based on the company's upcoming Modular Electric Drive Kit (called MEB, its German abbreviation). MEB is a new highly flexible vehicle architecture that is being developed specifically for electric vehicles. In other words, something very like the I.D. Buzz (minus some of its show-car touches) could be put into production in a few years.

Why it matters: It's a preview of VW's hoped-for (near) future

Still reeling from the massive impact of its diesel-emissions cheating scandal, VW is embracing electric vehicles as a way to move forward. VW brand chief Herbert Diess (who joined VW in 2015 and isn't implicated in the scandal) laid out the vision for his brand at the North American International Auto Show last week:

The Volkswagen brand's big electric offensive begins in the year 2020 with a completely new vehicle architecture [MEB]. That is when we will be launching an entirely new generation of fully connected, all-electric vehicles to the market. By 2025 we want to be selling one million of these vehicles annually. We are making electric mobility the new trademark of Volkswagen.

Will one of those new electric VWs look like this take on the Microbus? VW was coy on that point, saying only that the I.D. Buzz Concept "conceptually follows the new Volkswagen brand strategy." If it does get built, it won't be soon: 2021 or thereabouts is probably a realistic guess.

But based on the reactions observed by your humble Fool after the I.D. Buzz Concept was revealed in Detroit, I think VW would be crazy not to put something like it into production -- retro styling and all.