In the global tobacco market, Philip Morris International (NYSE:PM) is one of just a handful of industry giants that serve hundreds of millions of smokers around the world. Yet competition is fierce, and rival British American Tobacco (NYSE:BTI) took a big step forward earlier this week by finally coming to terms with U.S. counterpart Reynolds American (NYSE:RAI) to take 100% control of the American tobacco giant.

With the purchase, BAT hopes to reap competitive advantages that it will use to put pressure on Philip Morris. Many investors believe that in response, Philip Morris should look for ways to boost its own scale, and a merger with Reynolds American's prime U.S. competitor and Philip Morris' former parent company seems like the clearest path toward getting that job done. Let's look more closely at the deal and its implications for Philip Morris. 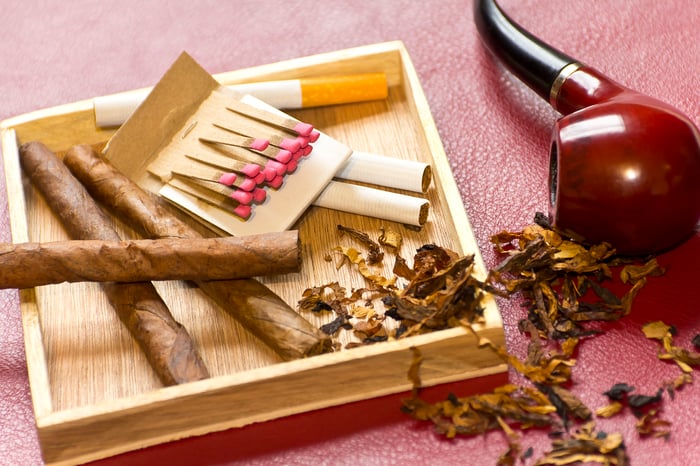 What BAT and Reynolds American agreed to

British American Tobacco already owns about 42% of Reynolds American, and so the deal that BAT announced earlier this week covered just the remaining 58% of the company owned by other shareholders. The final terms of the deal gave Reynolds shareholders an upgrade from BAT's November offer. The initial rejected offer would have given Reynolds shareholders $24.13 per share in cash and $32.37 in BAT shares, with a total implied value of roughly $47 billion, or $56.50 per Reynolds share. The new deal, by contrast, boosted the cash component by more than $5 to $29.44 per share, and offered 0.526 shares of BAT for every Reynolds share. The total value of the new deal was $49.4 billion, or $59.64 per share based on closing prices for BAT stock on the day before the offer.

British American Tobacco is optimistic about what the deal means for it and Reynolds. It sees a better balance between high-profit developed markets and high-growth emerging markets, providing both financial stability and growth potential. The deal unites ownership of the key Newport brand, along with other well-known brands like Kent and Pall Mall. BAT believes that its next generation product business will prosper under the combined company, offering both e-vapor and heated-tobacco products in the most lucrative markets.

Moreover, from a financial standpoint, the merger should help Reynolds and BAT. The companies expect $400 million in annual cost synergies by the third year after the merger is complete. Earnings and dividends should rise in the first full year following the transaction, with mid-single digit percentage gains in earnings per share by the third year. BAT intends to improve its balance sheet by reducing leverage consistently over time.

At the same time, BAT remains committed to treating shareholders well. The company affirmed its intent to keep a payout ratio of at least 65%, and enhanced cash generation should allow BAT to sustain dividend growth comfortably going forward.

How must Philip Morris International respond?

The challenges that have faced Philip Morris International lately have shown the value of having as large a manufacturing and distribution base as possible. Globally, regulation has gotten stricter over time, and the current emphasis among many national governments involves a push toward plain-packaging regulations. Plain packaging effectively devalues the investment that companies make in their brands, and it becomes much more important for tobacco producers to focus on costs in order to keep their margins as high as possible. Economies of scale are a key element of cost containment, and Philip Morris could benefit by following BAT's lead on that front.

Obviously, the clearest way for Philip Morris to grow would be to reunite with its former parent. Yet even though conceptually, such a merger would look very similar to what Reynolds and BAT are doing, there would be obstacles to overcome. The biggest issue is the fact that Philip Morris didn't take any ownership stake in its former parent when they broke up, and so the international tobacco company would have to find a way to raise much more financing to make an acquisition on its own. At this point, the market capitalizations of the two companies are nearly identical. That makes a merger of equals the easier option, but it's far from clear that the leading tobacco company in the U.S. has an interest in recombining with its former subsidiary.

Moreover, antitrust concerns would inevitably come up. Reynolds American's own merger with Lorillard took a lot of work to get regulatory approval, and it required substantial divestitures to get the deal done. Philip Morris might not want to do that just to get a deal done.

Investors can expect to hear plenty of speculation about what Philip Morris International will do to respond to the BAT-Reynolds merger. At this point, though, the logistical difficulties involved in reuniting with its former parent could lead Philip Morris to consider other, less obvious ways to compete more effectively.