Shares of struggling sandwich chain Potbelly Corporation (NASDAQ:PBPB) recovered some of its post-IPO losses last year as the stock rose 10% in 2016 according to data from S&P Global Market Intelligence. The company steadily grew earnings estimates, and seemed to instill confidence in its long-term growth potential. As you can see from the chart below, much of its gains came in February as it reported fourth-quarter earnings and the market bounced back from the early sell-off. 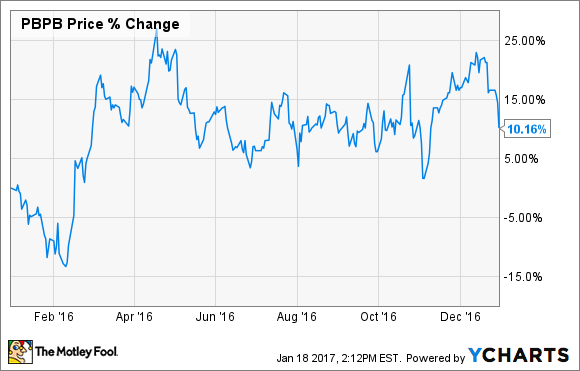 Potbelly shares surged 8% after the company reported fourth-quarter earnings that beat estimates in February. Comparable sales increased 3.7%, and earnings per share increased by a third to $0.08, beating estimates at $0.06. Management also saw moderate growth in 2016 of comparable sales, up 3.5%-4.5% and EPS increasing by about 25% to $0.36-$0.38.

While the stock remained volatile for the duration of the year, it basically fluctuated around the same point, finishing the year near $13. By the time the company's posted its third-quarter earnings report, comparable sales had slowed to just 0.6% in that period as Potbelly seemed to get caught up in the so-called restaurant recession. Through three quarters, comps were up 1.9% and it forecast a full-year increase of just 1%-2%. However, it was able to maintain its earnings guidance nonetheless, calling for a full-year per-share profit of $0.36-$0.38. A 110-basis-point drop in food costs seemed to be the primary reason for the improving profit margin, which has allowed for solid earnings growth in spite of weak comparable sales.

Fourth-quarter earnings reports from restaurants should begin coming out within the next week, which will give some insight into whether the industry slowdown has abated. Though most restaurant stocks rose following Donald Trump's election victory, Potbelly did not. That seems odd, considering that most of Potbelly's restaurants are company-owned, meaning that it should benefit more from relaxed labor policies than franchisors would.

Going into 2017, comparable-sales growth will be key for the stock to keep rising. If it remains at just 1%-2%, the company will continue to be an also-ran in the fast-casual industry.