It was hard to know exactly what to expect going into network security company Check Point Software Technologies Ltd's (NASDAQ:CHKP) fourth-quarter results. After all, competitors like Fortinet Inc (NASDAQ:FTNT) and Palo Alto Networks Inc. (NYSE:PANW) had both served notice that sales cycles were lengthening, and that's usually a clear sign of a slowing marketplace. Given Check Point's status as the established leader -- with non-GAAP operating income margin of 55% to protect -- it would have been natural for investors to be a bit fearful. But when the report was released on Thursday, earnings came in ahead of expectations.

Let's take a look at what happened in the quarter and what it could mean for the rest of the sector.

Here are the headline numbers from the fourth quarter:

The headline numbers were excellent, and even after an excellent run for the stock, the market took Check Point stock higher by 7.5% on the day. The stock is up nearly 25% in the last three months compared to a decline of 4% for Palo Alto Networks and a 4% increase for Fortinet stock.

Both Palo Alto and Fortinet have made cautionary remarks in recent months. Fortinet missed management's revenue estimates in its third quarter (revenue came in at $316.6 million compared to a guidance range of $319 million to $324 million) and CEO Ken Xie had talked of "moderated spending" and "extended sales cycles" on the earnings call in late October.

Check Point subsequently gave a good set of third-quarter earnings, with CEO Gil Shwed claiming he hadn't seen the kind of environment reported by Xie. However, if you thought the network security industry was out of the woods, that wasn't the case.

Palo Alto Networks reported first-quarter 2017 results in November and CEO Mark McLaughlin said they were "not as robust as we expected." He went on to say that "purchasing decisions have to go through additional approvals, particularly in larger companies on the increasingly larger opportunities we are winning. As a result, we saw some deals push." It sounds similar to what Fortinet's management said. McLaughlin would later claim it was more to do with the market than the competition.

That said, Check Point delivered another good quarter, and management discussed two company-specific factors that have probably played a role.

First, CFO Tal Payne said the company achieved "double-digit growth in our core appliances with strong transition to our new product family launched earlier this year. This quarter, over 85% of our appliances business comes from the new family." As you can see below, product revenue (36% of total revenue) and software blade subscriptions (23%) increased their growth rates in the quarter, indicating success in expanding the customer base. This could be thanks to sales spurred by the new product family. 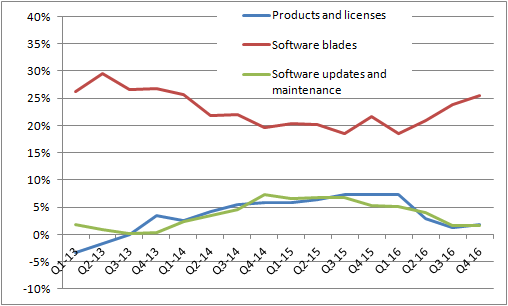 Second, Payne talked of the "fruits of the investment" made in expanding the sales force, although, as one analyst remarked on the earnings call, it's taken awhile for the effect to be seen -- the increased investments began in early 2015. Shwed responded by saying it has taken a year for the benefits to come through, and the current quarter had confirmed the positive trend seen in the previous quarter.

It's good news, but the increased sales force has come at the cost of margin contraction. 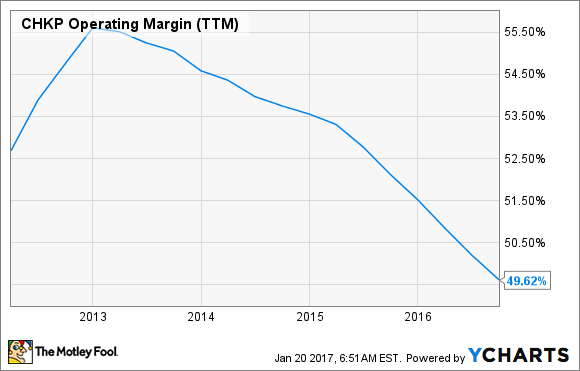 The two factors -- new product family and increased sales force -- are obviously company-specific, and there is no guarantee that Fortinet and Palo Alto will report good results in their upcoming earnings. As for Check Point, the company closed out a good year, and guidance for first-quarter revenue of $420 million to $440 million implies year-over-year growth of 4% to 9%. All told, despite cautionary commentary elsewhere, Check Point expects to continue growing solidly in 2017.