As many investors know, PayPal Holdings Inc (NASDAQ:PYPL) recently entered into much publicized partnerships with credit card giants Mastercard Inc (NYSE:MA) and Visa Inc (NYSE:V). While some analysts expressed concern over falling margins, PayPal CEO Dan Schulman defended the deals by saying they made the customer experience a top priority:

Being a customer champion means always prioritizing the needs of our customers. ... By making customer choice a priority for PayPal, we are creating a significantly better customer experience to accelerate adoption and drive engagement.

Though PayPal's stock price initially declined upon news of the Visa deal, it quickly recovered and reached new heights after the later deal with Mastercard was announced. PayPal management insists the deals will grow active accounts and engagement, and that operating and transaction margins will soon stabilize. 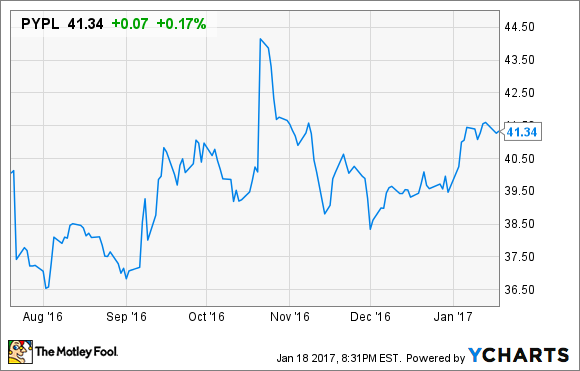 But these aren't the only deals management believes will drive future growth. While a lot of digital ink was spilled detailing these high-profile agreements, much less attention was drawn to PayPal's other deal-making during the past year.

It might be helpful, therefore, to briefly review these much less noticed collaborations and see if they will ultimately prove to be beneficial to shareholders.

A deal to drive cross-border fees and international growth

In December 2015, PayPal announced a limited pilot program with Alibaba Group Holding Ltd (NYSE:BABA). Select vendors on Wholesaler, a B2B section on Alibaba's website, began offering PayPal as a payment option for other vendors purchasing goods through the Wholesaler website. In April, during the company's first-quarter conference call, Schulman reported the pilot program would be expanded to include additional vendors and countries.

However, these announcements proved to be just the appetizer before the main course. In the third-quarter conference call, Schulman revealed PayPal would become a payment option on Alibaba's global retail marketplace, AliExpress. Schulman stated he believed the deal had "the potential to drive meaningful cross-border traffic" as consumers from outside China began making more and more purchases through the platform from Chinese merchants.

Not phoning it in

In February 2016, PayPal and Vodafone Group Plc -- the large multinational telecommunications company -- announced that Vodafone Wallet users in Europe would soon be able to use PayPal to make purchases in store, online, and in-app. The program was rolled out slowly, starting in Spain before being expanded to Italy and the U.K. later in the year. Initial progress is encouraging. In Spain, for instance, the program generates over six in-store purchases per active user per month.

Citigroup became the first global bank to partner with PayPal to tokenize cards for card holders wishing to use PayPal to make point-of-sale purchases wherever Mastercard and Visa contactless payments are accepted. In 2017, PayPal will roll out a pilot making it easier for Citigroup card holders to add their cards to their PayPal accounts. In addition, customers will see a digital representation of their cards in their PayPal wallets when they pay.

Fidelity National Information Services is a financial technology company that works with over 6,000 domestic banks. The agreement makes it easier for joint account customers to add applicable bank accounts and credit cards to their PayPal accounts, and it will make their PayPal accounts, including balances, more visible on their online accounts with their banks.

The big takeaway for PayPal investors

These deals are the first extensions PayPal has made to its arrangements with Mastercard and Visa, which allow joint customers to seamlessly use their accounts for purchases made online, in-app, and in store. PayPal's management clearly believes this type of convenience will increase user engagement, directly leading to more transactions per active account.

Given PayPal management's track record in driving account user growth and engagement, I would not want to bet against it. In its most recently reported quarter, the number of active accounts reached an all-time high of 192 million. That represents an 11% increase year over year. Payment transactions per active account were up 13% year over year, even though most of these new agreements have not even been rolled out or are still in their infancy. If the added convenience and choice these deals bring to PayPal account holders incentivize them to use the platform even more, investors might have a lot to look forward to in 2017.