The Canadian pipeline giant is more than just this one pipeline.

President Donald Trump recently signed executive orders aimed at restarting stalled oil pipeline projects, including a request that TransCanada (TRP 0.26%) reapply for approval of its controversial Keystone XL pipeline. While the president's invitation has the Canadian oil pipeline giant reevaluating the project, it does not guarantee the project will move forward. That's why investors shouldn't jump into TransCanada's stock just because of this project. Instead, there are plenty of other good reasons to buy TransCanada's stock.

When former President Obama rejected the original Keystone XL pipeline because of environmental concerns, it effectively killed that project. As a result, TransCanada needs to start from scratch, including signing up enough shippers to fill the pipeline's proposed capacity. That could be easier said than done given what has happened in the oil market over the past few years.

First of all, oil production in Canada is not growing as fast as it once was. That's because oil companies significantly slowed the pace of new projects well before oil prices collapsed due to high costs, including deferring the $11 billion Joslyn mine, where Suncor Energy (SU 0.37%) is a partner, and the Corner and Pierre River projects. Deferrals have since accelerated thanks to the collapse of oil prices. According to an analysis by Wood Mackenzie, in 2015, energy companies deferred $200 billion of investments worldwide, 30% of which were new oil sands projects. Among the projects delayed that year were Suncor Energy's MacKay River 2 expansion and Canadian Natural Resources' (CNQ 0.07%) Kirby North project. The Suncor Energy project was initially expected to add 20,000 to 25,000 barrels per day to the oil market this year, but the company has yet to sanction the project. Meanwhile, Canadian Natural Resources just authorized its 40,000 barrel per day project, but it will not deliver any oil until 2020.

Not only are fewer oil projects under development in Canada, which will lead to lower production than anticipated, but several pipeline projects have cut in line ahead of Keystone XL. For example, Kinder Morgan (KMI 0.05%) recently won approval for its Trans Mountain expansion, while Enbridge (ENB 0.23%) got the go-ahead for its Line 3 replacement. Further, TransCanada has already moved on by proposing the Energy East project, which would move oil from western Canada to its east coast. As the chart at the top of the below slide shows, there does not appear to be any need for the Keystone XL pipeline at the moment, unless TransCanada chooses to defer Energy East: 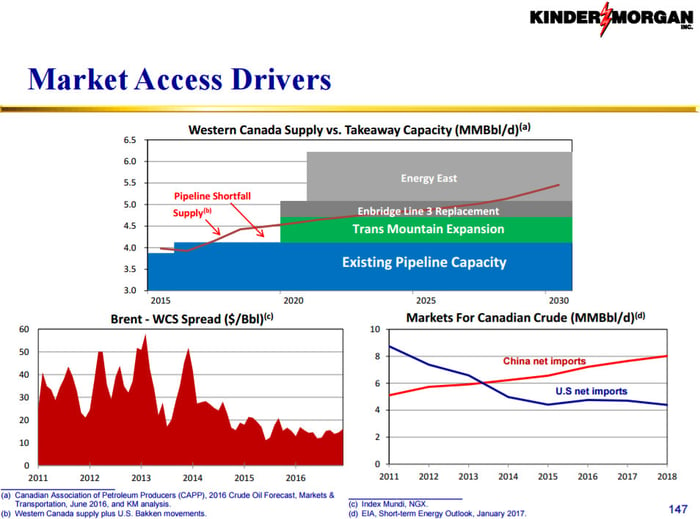 Finally, the cost of the project will likely rise well above the current $6.1 billion estimate. One of the potential cost drivers is the Trump administration's requirement that TransCanada use American-made steel and pipes, which are more expensive than Chinese steel, for example. Depending on the final cost, the project could be uneconomic, especially if too many shippers balk at the shipping rate.

What investors need to realize about TransCanada is that it can thrive even if it does not build the Keystone XL pipeline. That's because the company has 26 billion Canadian dollars of near-term capital projects under development. These projects include several new natural gas pipeline projects across North America, as well as new oil pipelines and power projects. That backlog alone supports TransCanada's view that it can grow the dividend by 8% to 10% per year through 2020, which is an acceleration of the 7% compound annual growth rate it has delivered since 2000.

Further, the company has plenty of growth beyond that backlog. Overall, TransCanada has another CA$45 billion of commercially secured long-term projects, though Keystone XL does represent CA$8 billion of that amount. However, it is one of four transformational projects in the company's long-term project portfolio, the largest of which is the CA$15.7 billion Energy East project. In other words, while bringing back Keystone XL enhances TransCanada's growth potential, it is by no means crucial to its future success.

The revival of the Keystone XL project will likely keep TransCanada in the news for quite some time. However, investors need to realize that this project is not what defines TransCanada, because it will deliver exceptional growth with or without this project. Investors should buy the stock because of its clearly visible growth, not just because it might finally get to build Keystone XL.