Ford Motor Company (NYSE:F) said this past week that it earned $166 million in Europe in the fourth quarter of 2016, giving it a pre-tax profit of just over $1.2 billion in the Old World for the full year. That's a sea change.

Europe was a huge money loser for Ford for several years. Here's how Ford turned it around, and what's working now for the Blue Oval in Europe.

The story starts back in 2012. After a series of losses, then-CEO Alan Mulally laid out a comprehensive turnaround plan for Europe, modeled on the plan that had successfully turned around Ford's operations in North America. As you'd expect, that plan included some restructuring and cost-cutting efforts. But it also included plans to bring several new Ford products to Europe, including some models that it had never before sold in the Old World, like the Edge and Mustang.

Those new models began to arrive at Ford's European dealers just in time for an upswing in sales across the key markets of Western Europe. At the same time, Ford took steps to move its entire product line a bit more upscale, adding premium trim lines that it hadn't previously offered in Europe.

The result? A $259 million profit in 2015 -- Ford's first after several years of losses -- and a much bigger profit in 2016. More to the point, Ford's fourth-quarter profit was up 27% from a year ago despite flat wholesale shipments and revenue, thanks to improved pricing and profitability on its current mix of products. 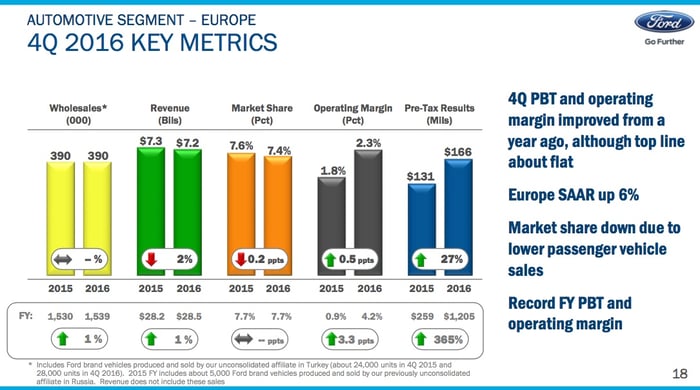 In an interview on Thursday, CFO Bob Shanks emphasized that those upscale product variants have been a very good story for Ford in Europe. In fact, he said, improvements in product mix accounted for about $100 million of Ford's fourth-quarter profit. "And if you look at the full year, we probably got about $700 million in profit improvement just from mix in Europe," Shanks said.

Shanks noted that a key part of Ford's transformation plan for Europe had always involved enhancing the brand, moving Ford's product portfolio up in terms of where the brand wanted to compete, and adding those higher-trim lines. "That has really paid off," he said.

"This is our seventh consecutive quarterly profit" in Europe, Shanks told investors during Ford's earnings call on Thursday. He also said:

You can see that the wholesales were actually flat in the quarter, revenue also essentially flat. That decline [in revenue] is more than explained by exchange.

Our [market] share was down a touch, 0.2 point. That was explained by lower passenger car sales, that was basically Mondeo, Focus, and C-MAX. But within that, we had very strong performance for commercial vehicles. Our share [of Europe's commercial-vehicle market] was over 14%, up 0.4 point. Not only were we the number one brand [of commercial vehicles in Europe] for the year, we were the number one brand also in the fourth quarter. Operating margin at 2.3% and $166 million profit. And if you go down and look at the full year, that was a record at $1.2 billion. It was also a record margin at 4.2%. 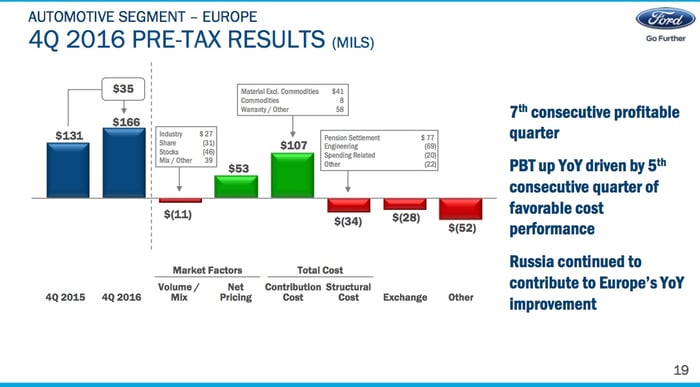 Shanks said lower costs helped drive the $35 million year-over-year profit gain. But he also reiterated the point he'd made to me earlier about profit mix. "If you look at the callout box on mix, that $39 million within that is about $100 million of good news on mix, both mix among products, as well as the right mix of options."

Shanks and CEO Mark Fields also noted that, after a rough stretch, Ford's operation in Russia is also seeing improvements, and those are contributing to its overall results in Europe.

Shanks also delivered Ford's official guidance for Europe for 2017. He said that Ford expects Europe to be profitable, once again, but its 2017 profit will probably be lower than its 2016 result. The decline is driven, in part, by exchange rates, specifically the drop in value of the British pound, and partly by higher costs related to the planned launches of revamped Fiesta and EcoSport models in Europe during the year.