General Motors (NYSE:GM) said it expects its revenue and pre-tax earnings to grow in 2017 versus its strong 2016 result. That runs counter to guidance from some of GM's key rivals -- and to most analysts' expectations for the U.S. new-car market in 2017.

What is GM thinking? That requires a little explanation.

GM's old rival Ford Motor Company (NYSE:F) recently guided to a somewhat lower bottom-line result in 2017, in part because Ford expects its sales volumes to be lower in North America.

That seems like a reasonable expectation. After several years of strong growth following the 2009 recession, the U.S. new-car market appears to have leveled off. Sales of "light vehicles", the industry's term for cars, SUVs, and pickup trucks, were up just 0.4% in 2016.

New-car markets are cyclical, and most analysts think that the U.S. new-car market is at its cyclical peak, possibly a bit past it. That doesn't mean that a slump is imminent -- the pace of sales could hold steady for several more quarters, perhaps even a few years, before a significant decline.

The key to understanding GM's optimism: Its product cycle

The key to understanding GM's optimism is to look at where GM is in its product-replacement cycle. Here's how GM President Dan Ammann explained it at a conference for investors in Detroit earlier this month. 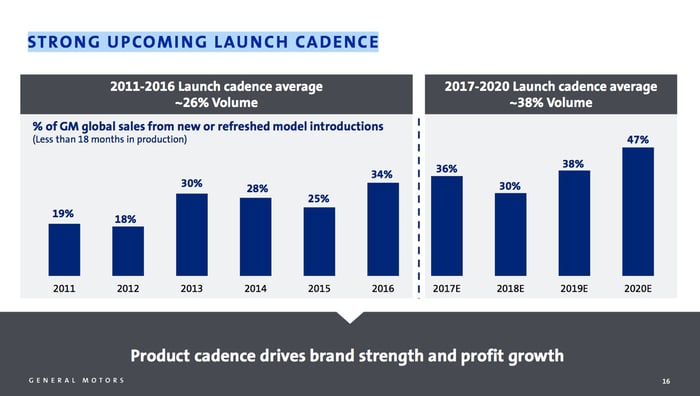 This [chart] represents the rate of refresh of our [product] portfolio over time. If you go back to 2011, 2012 when the investment in the preceding few years had been quite low, the refresh rate was low. And we've been steadily increasing the refresh rate over the last several years to a new high point in 2016. But there's still much more to come. And the refresh rate will only accelerate as we go forward over the next few years.

It's nearly always true in the auto business that new products command higher prices and deliver fatter profit margins than the products they replace, at least for the first couple of years. That's especially true when a strongly competitive new product replaces one that had become dated -- and when the new product is in a hot market segment. And GM has a slew of new products coming to market. 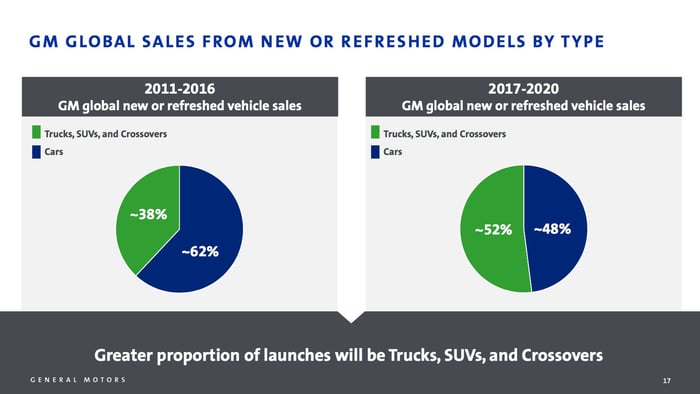 Right now, the hottest market segments in the U.S. (and to some extent in China and Europe as well) are crossover SUVs. Well, guess what GM is launching over the next couple of years? Ammann explained:

Importantly, that portfolio cadence going forward is timed so that we're exactly hitting the sweet spot of the market with a whole new SUV portfolio coming up here in the next couple of years. From 2011 to '16, our refresh was heavily oriented toward cars and less so to trucks, SUVs and crossovers. And as we flip forward and look through '17 to '20, the weighting reverses and we have a much heavier emphasis on trucks and SUVs and crossovers as we go forward here.

So we're going to have the right product coming to the market at exactly the right time to where the market trends are going. [Emphasis added.]

GM has already revealed all-new versions of the huge-selling Chevrolet Equinox and important GMC Terrain and Chevy Traverse crossovers, all launching over the next few months for the 2018 model year.

Those join the all-new Cadillac XT5, GMC Acadia, and Buick Envision launched last year -- and they'll soon be joined by more all-new crossovers, including a new Buick Enclave and at least two all-new Cadillacs over the next couple of years.

Odds are that each of those new crossover models will sell better than their predecessors, at least for a while, even if the overall market is flat. And whether sales totals rise or not, it's a safe bet that every one of those new products will generate more profit per sale than the vehicles they replace.

That's why GM is confident that its revenue and earnings will rise in 2017 even if the U.S. market shows no growth: As Ammann said, it has the right products arriving at the right moment.