Data source: Ericsson. Financial results reported in Swedish crowns, converted to average exchange rates of $0.11 USD per SEK in Q4 of 2016 and $0.12 USD per SEK in the 2015 period.

What happened with Ericsson this quarter?

This was a tumultuous quarter for the Swedish telecom infrastructure veteran. 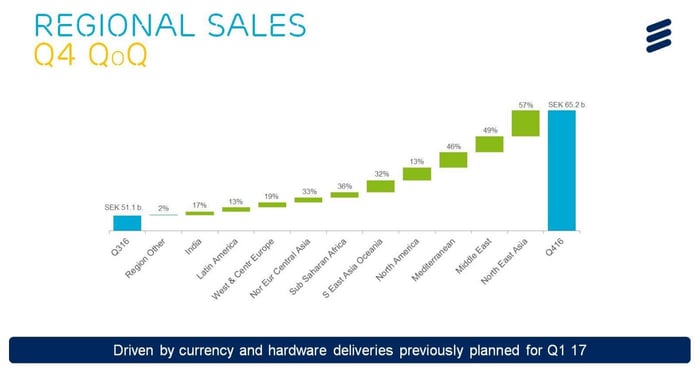 Ericsson's management did not provide firm guidance targets for the coming quarter or fiscal year. Instead, they said that markets would stay "tough" in 2017, putting pressure on sales expectations. Gross margins are expected to improve in the second half of 2017, ending a negative streak that started in the spring of 2016.

In a conference call with Wall Street analysts, Ekholm provided a reminder of what Ericsson is all about. Investors might see this note as a call to arms, getting back to the nuts and bolts of running a multinational technology business. Ekholm said:

We are in a technology industry. We need to be technology leaders and stay at the forefront of the technology development. Ericsson has a unique set of assets with our products but we also have services and solutions, and that package creates a unique position for us to compete in the market. That's something we need to leverage, but it's also something we continuously need to invest in and develop.

With degrees in electrical engineering and economics and 10 years of service on Ericsson's board of directors, Ekholm seems exceptionally qualified for his new job. Vestberg is moving on to lead Sweden's Olympic committee, including efforts to host the Winter Games in 2026.

Ekholm is widely expected to restructure Ericsson around the next generation of mobile technology, known as 5G, alongside support for cloud computing and the Internet of Things. It's less obvious where he will start slashing Ericsson's efforts and expenses in order to achieve that sharper focus. Ekholm reportedly started making the rounds among Ericsson's top customers in North America, Asia, and Europe as soon as he was selected, giving him a three-month head start.

Starting in the first quarter of fiscal year 2017, Ericsson will report results in three new segments: networks, media, and IT and cloud.