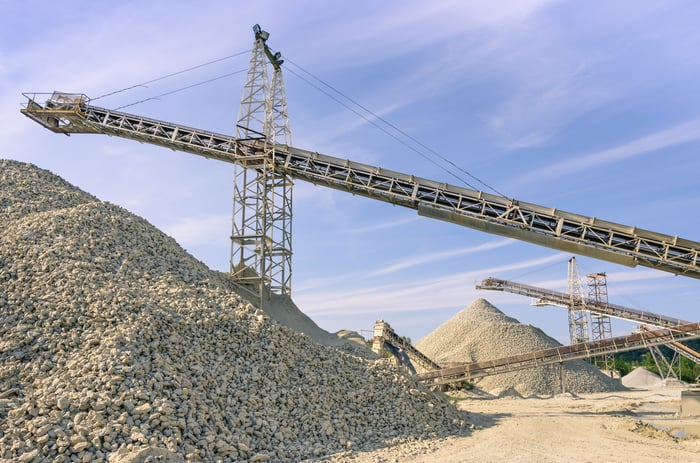 Lime and limestone products continued to be in high demand from construction and environmental customers. That drove solid revenue growth for U.S. Lime & Minerals (NASDAQ:USLM) during the fourth quarter, enabling it to end 2016 on a high note. However, while the company ended 2016 in a good position, it continues to face pricing pressure because of a competitive market, which could hold down growth in 2017.

We are pleased that our 2016 operating results improved over last year, leaving us with $75 million in cash at Dec. 31, 2016, compared to $60 million at Dec. 31, 2015, and no debt. With our diverse customer base, overall demand for our lime and limestone products increased in the fourth quarter and full year 2016, although pricing remains a challenge in the current competitive environment.

Byrne continues to mention that pricing is a problem for U.S. Lime because of competitive pressure. Some of its larger competitors, however, don't seem to have the same complaints. During the third quarter, for example, aggregate-producing rivals Vulcan Materials (NYSE:VMC) and Martin Marietta Materials (NYSE:MLM) both mentioned that sales prices increased. In Vulcan Materials' case, it saw a 7% increase in the average freight-adjusted sales price, while Martin Marietta Materials said pricing in its aggregates product line was up nearly 9%. That said, these product segments include more than just lime and limestone, which suggests that the diversification and larger scale of Vulcan and Martin Marietta have shielded them from the pricing issues affecting U.S. Lime.

Other than complaining about competitive pricing pressure, U.S. Lime didn't offer any other forward guidance. However, on a more positive note, the company ended last year debt-free and cash-rich. The company continues to return some of this money to shareholders by announcing a 12-month extension of its share repurchase program -- which had $7.2 million remaining -- and increasing the dividend from $0.125 per share each quarter up to $0.135 per share on a quarterly basis. However, those two uses of cash are minimal compared with what's currently on its balance sheet, which means the company has built up quite a war chest that it could use to acquire a competitor and reduce some of the pricing pressure.