The lime and limestone product maker benefited from both higher limestone sales to oil and gas services customers as well as improving gas prices on its natural gas interests.

After two challenging years, oil and gas drilling activity in the U.S. finally seemed to start bouncing back as a result of stabilization in the oil market after OPEC cut its production. Those improving market conditions provided a boost to U.S. Lime & Minerals (USLM 0.37%), which benefited from increased sales to its oil and gas services customers. Meanwhile, higher natural gas prices helped return the company's natural gas production interests back to profitability. 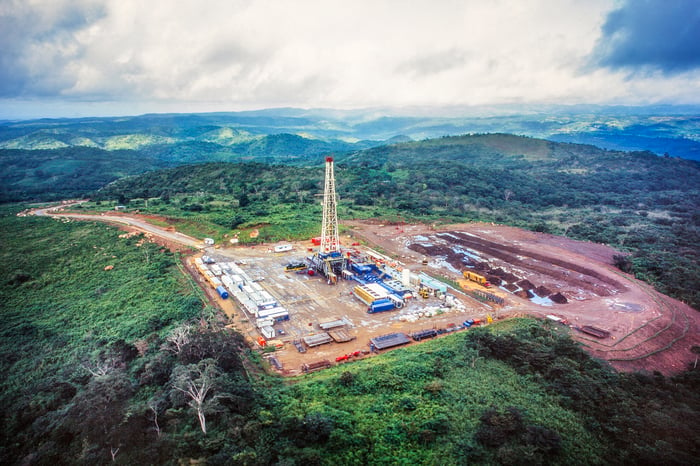 Oil and gas fueled the quarter.

CEO Timothy Byrne commented on the quarter by saying:

After a brutal oil market downturn that lasted more than two years, oil-field service companies experienced a significant increase in activity levels during the first quarter. For example, Halliburton's (HAL -1.17%) U.S. land revenue grew nearly 30% in the quarter, fueled by a rebound in shale drilling. Likewise, Schlumberger (SLB -0.87%) noted that the North American land market strengthened in terms of both pricing and activity during the quarter, causing the company to accelerate the deployment of some of its idle capacity. This rebound in drilling activities helped drive sales for U.S. Lime's products to the industry, products that service companies use as conditioning agents for drilling muds as well as to stabilize the soil around oil field roads and drilling sites.

That rebound in the U.S. oil and gas market should continue at least over the near term. In fact, Halliburton's president said that he "love[s] the opportunity that is developing in North America." Meanwhile, with Schlumberger restarting idled capacity, it suggests that the company expects the drilling recovery to gain steam in the coming quarters. As long as all of that drilling doesn't ding commodity prices, especially for natural gas, it should continue to fuel U.S. Lime's results in the coming quarters.