Just as analysts had expected, U.S. light-vehicle sales dipped slightly in January. The 1.9% decline to 1.14 million units was actually a little better than forecast, as the seasonally adjusted annual rate (SAAR) topped estimates at 17.57 million vehicles. Demand for new vehicles tends to drop off in January, following the typical blockbuster December, when sales are fueled by holiday and year-end deals, leaving January one of the lowest-volume months of the year. Let's zoom in on Detroit's second-largest automaker, Ford Motor Co. (NYSE:F) to examine its overall data and a couple of important takeaways from its January sales results.

The automaker's total sales declined 0.6% year over year in January, with its namesake Ford brand's 1.6% slip partially offset by Lincoln's 22.4% surge. Its total car segment (unsurprisingly) plunged 17.5% compared to the prior year, while SUVs and trucks moved 7% and 5.5% higher, respectively.

With that data in mind, let's dig deeper into the story.

Vehicle sales vary wildly from month to month, due to seasonality, incentive deals, and sometimes inventory levels, but over time, the F-Series has increased its sales consistently. 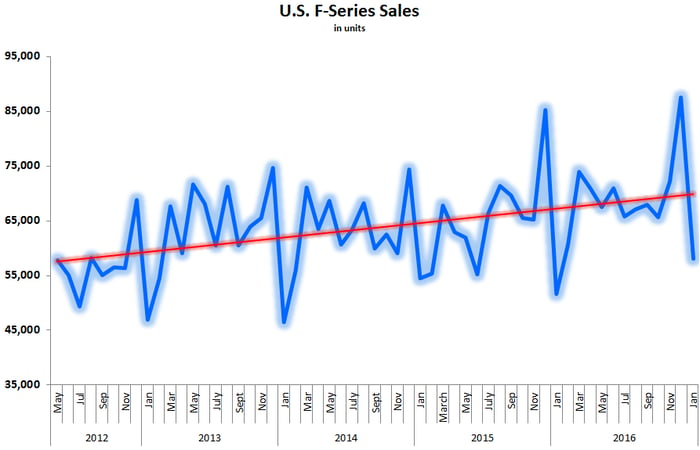 Last month, sales of F-Series pickup trucks nearly hit 58,000 units, a 13% increase compared to the prior year during what's typically the weakest month for major automakers. What's better is that total sales were fueled by retail sales: F-Series retail sales were up 19% last month, with gains in all regions. Put simply, it was the F-Series' best January sales result since 2004.

Generally, investors would prefer supply to see it between 60 days and 70 days, but it's important for automakers to refill the lots after a strong finish to the year, as they head into the busy spring selling season, so a rise in inventory now isn't abnormal.

It's been a long decade, or more, for Ford's luxury Lincoln marque. Fortunately, it appears the brand's turnaround is finally gaining some traction: In 2016, it achieved its third consecutive year of annual gains -- and as you can see below, that hasn't happened in some time. Lincoln kicked off 2017 with a strong 22.4% gain to 8,785 units. That was driven in large part by the all-new Lincoln Continental, which sold 1,167 units and was incremental compared to the prior year's sales figures. Lincoln's MKZ, MKC, and MKX all posted strong results, up 7%, 16%, and 43%, respectively.

January was a better than anticipated month for the folks at the Blue Oval, despite total sales declining slightly. Pricing remains very strong, sales of the F-Series and Lincoln continue to impress, and as long as incentives and inventory remain in check, 2017 has started off in a very profitable way for Detroit's second-largest automaker.