Britain's GW Pharmaceuticals (GWPH) has certainly captured the market's imagination with its cannabidiol drug development platform. Over the past three years, its stock is up by an astounding 1,200%: 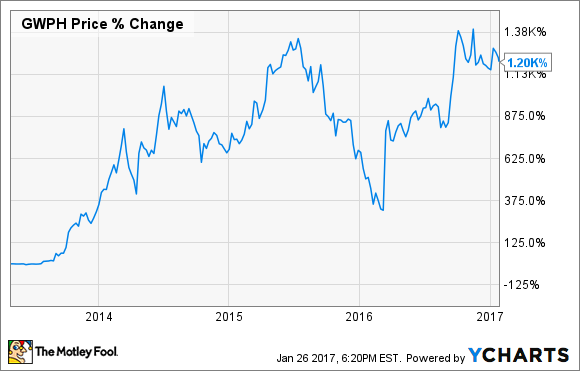 Although the market's glowing enthusiasm is seemingly based on the repeated clinical success of GW's experimental epilepsy treatment Epidiolex, it's probably safe to say that this high-flying stock is going to have trouble pushing much higher -- at least in the near-term. Backing this assertion, the drugmaker's shares are already trading at close to 17 times next year's projected revenue estimate, and that's assuming a successful regulatory filing for Epidiolex this year.

So, if you're on the hunt for biopharma growth stocks with more attractive valuations than GW, I think Acadia Pharmaceuticals (ACAD -0.93%) and Sarepta Therapeutics (SRPT 0.79%) are definitely worth checking out. Here's why.

This battleground stock has momentum on its side

Since the launch of its Parkinson's disease psychosis (PDP) drug Nuplazid last May, Acadia has gotten a lot of attention from bulls and bears alike. On the bull side of the debate, Nuplazid appears to be a megablockbuster in the making, with the drug's peak sales estimated to reach upwards of $2 billion.

Bears, for their part, believe that Nuplazid's outstanding safety question marks will ultimately slow its commercial uptake in PDP, and its weak phase 2 results in Alzheimer's disease psychosis (ADP) imply that a pivotal-stage trial is largely unwarranted and perhaps a waste of resources. 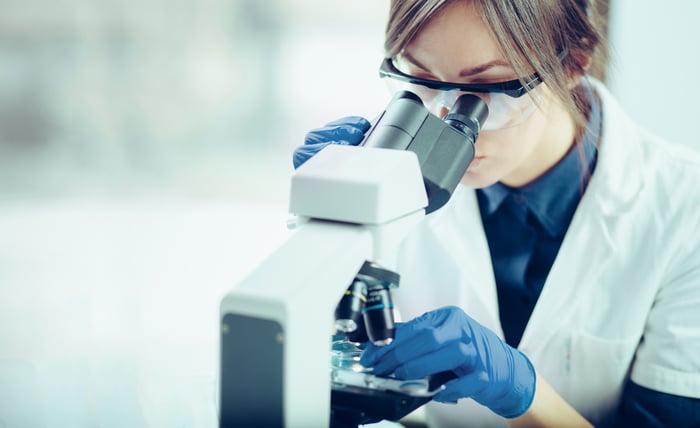 Personally, I side with the bulls in this particular fight. The first reason is that Nuplazid also produced mixed results in its PDP clinical program, but eventually got the green light from the FDA.

While the drug's only mildly significant result in ADP at six weeks (p-value = 0.0451) don't exactly inspire a whole lot of confidence, it's also important to bear in mind that these types of cognitive disorders are extremely difficult to treat. In other words, there's reason to believe that even a hint of effectiveness may be enough to get a drug on the market for this particular indication.

That's not to say that Nuplazid is destined to get a label expansion in ADP that could add another million or so patients to its target market. But I think the doom and gloom certainly needs to be weighed against the current unmet medical need and the exceedingly poor track record of experimental Alzheimer's drugs in general.

On the safety front, Nuplazid's better-than-expected commercial launch suggests that doctors are indeed interested in prescribing this novel medication for PDP and that the potential safety issues may be outweighed by its real world benefits. Long story short, I'm cautiously optimistic that Nuplazid's commercial momentum will continue unabated over the next three to four years, putting it on track to reach blockbuster status by perhaps 2021.

If true, Acadia's shares are currently trading at a sharp discount relative to Nuplazid's value proposition.

Buy this biotech while it's still cheap

Shares of the rare disease specialist Sarepta Therapeutics are currently trading well below their 52-week highs at the moment because of the rough start to Exondys 51's commercial launch. 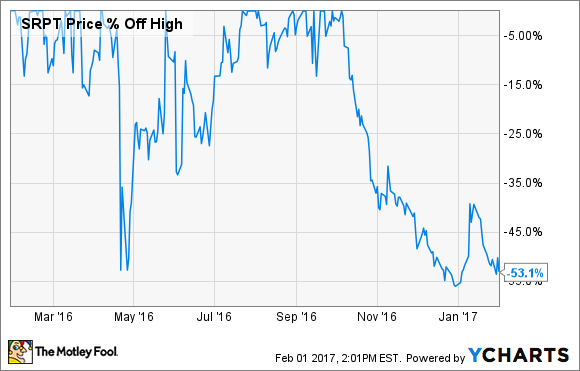 According to a recent investor update, this newly launched Duchenne muscular dystrophy, or DMD, drug, indicated for around 13% of the total DMD patient population, generated only $5.4 million in sales in the fourth quarter of 2016 -- dashing investors' hopes that it would get off to a quick start.

The underlying issues are that some payers have balked at the idea of paying for a drug that hasn't proven its effectiveness in a late-stage trial, and it takes time to properly identify the exact types of patients that would benefit from Exondys 51 (i.e., exon 51 amenable patients).

As a direct result, the Street's outlook on Exondys' initial penetration rate has essentially bifurcated of late. The bullish estimate, which assumes that these coverage issues will ease as Exondys' commercial launch unfolds, suggests that the drug could haul in around $487 million in sales next year; the bearish figure, on the other hand, falls closer to a mere $66 million.

If history is any guide, though, the bullish estimate should turn out to be the more realistic figure. Drugs for rare diseases, after all, tend to show a hockey stick-like uptake due to the necessity of identifying patients via genetic testing, and the need to convince payers to cover medicines that sport jaw-dropping price tags. Exondys 51, for instance, costs a whopping $300,000 per year.

Although not without risk, I think Sarepta is a deeply undervalued growth stock based on Exondys' overall commercial opportunity, combined with the stock's steep pullback from its former highs.