The self-driving tech company got a boost last month as it furthered some key partnerships and got several bullish notes from analysts.

The self-driving car specialist benefited from a deal with BMW and Intel in the beginning of the month and later jumped on an analyst upgrade. 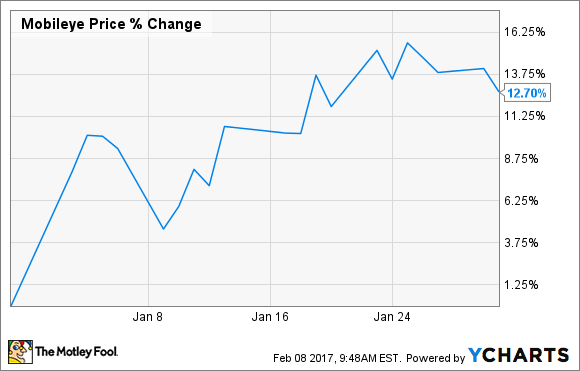 Mobileye stock jumped out of the gate to start the new year, gaining 8% on Jan. 3 after announcing the deal with BMW and Intel. The three partners said they would put a fleet of 40 self-driving vehicles on the road by the second half of the year, and Mobileye is also planning with the car maker and tech company to bring autonomous vehicles to market by 2021.

On the same day, the Israeli company announced a strategic partnership with NIO, an electric vehicle start-up. Later in the month, the stock continued to move higher as it got endorsements from several research firms and banks including Goldman Sachs, which lifted its rating on Mobileye to buy and gave it a $50 price target, saying the company was well positioned for upcoming opportunities in the autonomous driving space.

However, for investors, Mobileye is one of the few pure-play stocks available. Shares of rival NVIDIA nearly tripled last year on growing possibilities in the industry.

Mobileye's partnerships across the spectrum of automakers seem encouraging, and the company is solidly profitable. No one knows for sure where autonomous vehicles are going, but Mobileye looks like a solid bet for investors itching for a piece of a potentially huge industry.

Will Intel Profit From Self-Driving Cars?

Why Intel Is Paying $15.3 Billion to Acquire Mobileye