Both PayPal (NASDAQ:PYPL) and Square (NYSE:SQ) have taken their shareholders on wild rides over the past year or so. Since Square went public in November 2015, both stocks have had similar returns. Both currently trade within 10% of their all-time highs. And both have produced excellent operating results.

For investors trying to decide between the two payment processing companies, it might pay to take a closer look at each of them. 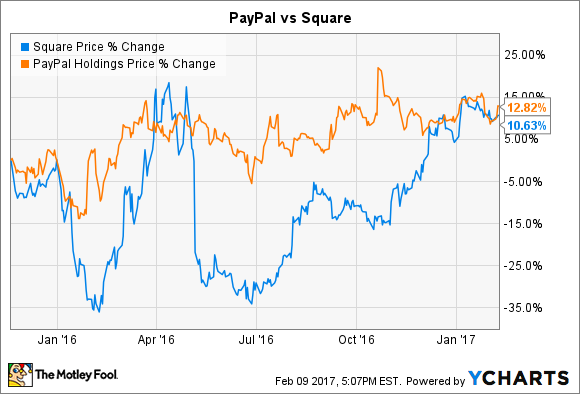 Square is still in growth mode

Square is most focused on growing its top line and expanding its products and customer base.

That doesn't mean it's willing to completely go off the deep end with loss-making deals. Last year, Square ended its partnership with Starbucks (NASDAQ:SBUX), which was a loss-maker from a transaction revenue standpoint but a huge marketing success. The last vestiges of the Starbucks deal should show up in Square's fourth quarter earnings, but the transition away from the deal is putting pressure on revenue growth. Through the first nine months of 2016, Starbucks transactions accounted for 6% of total revenue, down from 11% the year before.

The loss of Starbucks has analysts expecting revenue growth of just 25% next year. That's still faster than PayPal's 17% expected growth rate, but down meaningfully from the near 50% growth rate the company posted in 2014 and 2015.

Meanwhile, Square is expanding its customer base to more large businesses. Merchants with more than $500,000 in gross payment volume accounted for 14% of payment volume in the third quarter, up from 8% the year before. Large merchants are extremely valuable for Square because they recoup their losses from hardware sales faster and provide a bigger base to sell its other products to.

Those other products, which mostly show up in Square's software and data products, are the driving force behind Square's emerging profitability. While the bulk of Square's revenue and top line growth comes from its payment processing service, services like Square Capital, its business lending arm, and its payroll and instant deposit features are much higher margin. Overall, CFO Sarah Friar says software and data products should help Square achieve "mid-single-digit margin improvement in 2017."

Last year, PayPal generated $2.5 billion in free cash flow. That's up 36% from 2015, but that year also included its IPO expenses, so it's not a perfect comparison. In the fourth quarter, PayPal's free cash flow improved 28% on the back of 17% revenue growth. As such, free cash flow as a percentage of revenue grew to 26%.

The company uses free cash flow to buy back shares and make acquisitions. However, management is anticipating a slowdown in free cash flow growth next year, with the vague outlook for greater than $2.7 billion. If management just meets its benchmark, that's less than 10% growth.

Meanwhile, PayPal's revenue growth has been lagging its growth in total payment volume. Last quarter, PayPal processed nearly $100 billion in payments, but it generated less than $3 billion in revenue from them. The declining take rate is the result of the growth of Venmo and other Braintree products that take a lower percentage of payments than PayPal's flagship product. Venmo, specifically, grew payment volume to $5.6 billion last quarter, up 126% year over year.

The potential for PayPal to monetize Venmo and other Braintree products in the future means that investors could see an acceleration in revenue in the future. The company's recent deals with several credit card companies open the door for more in-store use of Venmo and PayPal wallet, which could be big revenue drivers going forward. For now, management and analysts expect a steady mid-teen growth rate for the foreseeable future.

So, which one should you buy?

Square is an exciting company with a lot of potential to grow, but PayPal makes for a better buy in my opinion. Square has a lot of upside, but it also has a lot of downside. Comparatively, PayPal has a proven business that's throwing off billions in cash every year. While the slowdown in free cash flow is a point against it, the steady revenue growth and the potential for it to accelerate more than make up for it.

Square may be suitable for someone with a higher risk tolerance, but PayPal is a better investment opportunity for most.