Over the past year, the diverging fortunes of semiconductor giants NVIDIA (NASDAQ:NVDA) and Qualcomm (NASDAQ:QCOM) couldn't be more apparent. 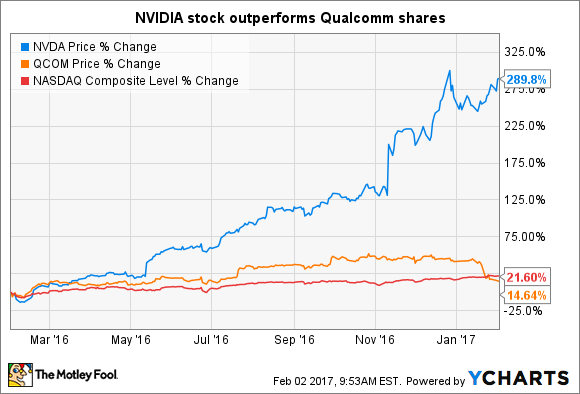 A case study in contrasts today, Qualcomm faces mounting pressure from a number of sources, but its stock is also tantalizingly cheap. Conversely, NVIDIA's soaring valuation reflects so rosy a vision of the future that it might be too expensive for investors today. Let's run Qualcomm and NVIDIA through a three-part analysis to see which chip giant looks like the better investment today.

As you can see in the chart below, both Qualcomm and NVIDIA are in perfectly acceptable financial shape, though they each stand out in different ways.

In terms of short-term liquidity, NVIDIA's current ratio is notably double that of Qualcomm. While more is certainly better when it comes to matters of liquidity, Qualcomm's current ratio of 2 is likely large enough to meet most reasonable near-term financing needs in its own right. Turning an eye to long-term solvency, Qualcomm and NVIDIA each receive a clean bill of health, here, since their cash balances and annual cash flow generation capabilities easily give them enough leeway to meet their financing and investment needs.

Importantly, Qualcomm's pending acquisition of NXP Semiconductor, a deal that makes great sense for Qualcomm, will alter its balance sheet structure. Qualcomm plans to finance the deal by tapping into its overseas cash and issuing new debt, though it isn't clear how the $39 billion deal will be split between funding sources. Barring the deal falling through, the coming changes to Qualcomm's balance sheet serves as a nice tiebreaker to tip this category in NVIDIA's favor, though both companies ultimately have favorable liquidity and solvency profiles.

Winner: NVIDIA (by a nose).

At a high level, Qualcomm's business focuses on two core areas: selling mobile chips and collecting royalty payments for its 3G and 4G patents. Qualcomm's Snapdragon processor franchise is the most widely used mobile SOC in the world, although it faces competition from other major components makers like Samsung and MediaTek. Though its chip business generates the majority of its sales, investors should pay far greater attention to Qualcomm's patent licensing division, Qualcomm Technology Licensing (QTL).

Qualcomm typically collects a percentage of the sales price for every 3G or 4G device sold globally, thanks to its collection of foundational mobile connectivity technologies. This provides Qualcomm with an incredibly high-margin source of revenue from its patent licensing arm. For example, QTL accounted for just 30% of its most recent quarter's sales, but 68% of its pre-tax earnings. However, Qualcomm has been sued by a number of governments and large tech companies for alleged abuse of its patent licensing practices. Qualcomm paid $975 million to settle an antitrust suit with Chinese regulators in 2015. Now with suits pending in the EU and South Korea, and Apple also suing Qualcomm, the status of QTL should play out in the courts in the coming months. All of this increases the risk for Qualcomm's financial outlook.

In stark contrast to Qualcomm, NVIDIA appears to be firing on all cylinders. Its leading graphics processing semiconductors, NVIDIA's GeForce, Tegra, Tesla, and other chip lineups all are the go-to components for growth markets in desktop gaming, self-driving cars, deep learning software, and much more. Looking to the future, analysts see sales jumping 36% this year and 15% next year. Furthermore, some of these trends, like self-driving cars, will take many years to fully unfold, giving NVIDIA a long-term growth runway its investors should love. Though Qualcomm's business is quite strong when not under legal assault in courtrooms around the world, NVIDA easily wins this section by virtue of the generally clear, positive outlook for its business.

The matchup of value versus growth between Qualcomm and NVIDIA truly bears out in looking at the companies' respective valuation metrics.

Especially considering its 4% dividend yield, Qualcomm's shares are tantalizingly cheap. (NVIDIA's dividend yield is around 0.5%.) This, of course, reflects the bearish outlook many investors see for the company and its legal problems. However, even after valuing it off of this year's estimated earnings -- itself something of an uncertain proposition -- NVIDIA is still nearly twice as pricey as the historically expensive S&P 500. With equally unpalatable valuations compared to their respective outlooks, it seems fair to call this valuation analysis as a tie and move on.

If Qualcomm weathers its current legal storms unscathed, its shares will have been an absolute steal at their current level. However, facing a risk that could potentially alter its business model, prudent risk management probably makes Qualcomm shares too toxic to own at the moment. To be sure, NVIDIA's shares are unpalatably expensive, but the company indeed has a pathway to make good on its valuation for investors willing to hold its shares over the long term. As such, NVIDIA beats Qualcomm as the better buy today.