Please ensure Javascript is enabled for purposes of website accessibility
Log In Help Join The Motley Fool
Free Article Join Over 1 Million Premium Members And Get More In-Depth Stock Guidance and Research
By Danny Vena – Feb 13, 2017 at 8:30AM

Connecting with consumers on an intimate level produces superior results. These five companies are the most beloved.

Market-research agency MBLM has released its 2017 Brand Intimacy Report, seeking to understand the part that emotion plays in successful companies. The report reveals that the top brands "are exemplars in building emotional bonds and deep connections with their customers and creating stronger attachment and engagement."

This deeper relationship leads to stronger financial performance, as these companies enjoy higher revenue and earnings than their peers; the study reveals that the stock prices of the top companies significantly outperformed the S&P 500. It also provides insights into specific demographics such as millennials or baby boomers. Break out the hearts and flowers, as we look at the companies that have the greatest emotional attachment for consumers. 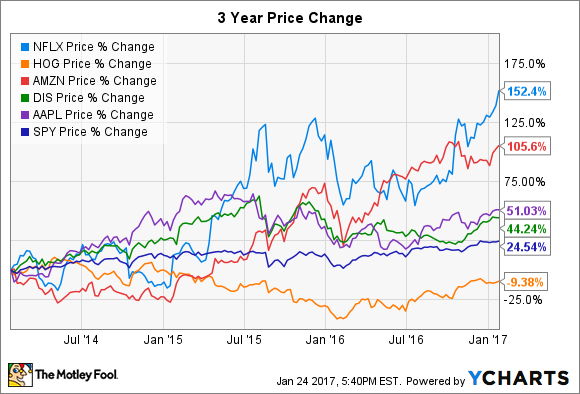 Netflix is most-loved among the 18-34 year demographic. Image source: Netflix.

The report found that escapist brands performed well over the past year. With nearly 50 million U.S. subscribers, Netflix (NFLX -4.49%) may provide one of the most popular forms of escape. Our ubiquitous streaming provider had the highest percentage of "bonding" customers -- those that express acceptance and trust of the company. It jumped from 25th place to 5th place in the last year, yet was only listed as an intimate brand by those aged 18-34. This represents a huge future opportunity, as Netflix is revered by a significant percentage of the youngest portion of the population. The phrase "Netflix and chill" entering the popular lexicon is an indication of the reach of this company into pop culture, and the loving feelings of customers for one of our favorite purveyors of entertainment.

A favorite brand among 45- to 64-year olds. Image source: Pixabay.

The Harley-Davidson (HOG -2.90%) brand is iconic and steeped in Americana. This company provides distraction of another variety. The report notes that "Harley-Davidson offers escape on the road, freedom and solitary time." Harley was only listed as an intimate brand by those aged 45 to 64. It has a higher price point than some competitors, and distinctive designs give the brand an image of exclusivity, resulting in an extremely fervent following among a small percentage of the population. It should be noted that this company is the exception among consumer favorites, having underperformed the S&P 500 over the three-, five-, and 10-year periods. We still love you, bro.

Amazon is loved across all demographics! Image source: Amazon.com.

The largest e-commerce company in the world, Amazon.com (NASDAQ: AMZN) was one of two brands that were the most successful in eliciting emotion across all ages and income brackets. It also offers escapism similar to Netflix via its Prime Video streaming service. Analysts estimate that Amazon has Prime members in more than half the households in the U.S. With its ability to provide all things to all people, Amazon can often be found gracing the lists of companies with the best customer service, as well. This alone may account for a great many of customers' expressions of amour for this company.

Disney (DIS -2.60%) ranked highest for nostalgia -- as the report says, "memories of the past and the warm, poignant feelings associated with them." The House of Mouse has been providing entertainment and escape for generations of fans since it first released Snow White and the Seven Dwarfs back in 1937. It has also continued to grow with fans, adding such favorites as the Star Wars and Marvel Studios movies in recent years. This shows, as it ranked No. 1 among millennials and No. 3 among those aged 35 to 44. With a strong showing among the youngest consumers, this translates to opportunities for relationships with the next generation of fans.

Apple is the most beloved brand. Image source: Apple, Inc.

Apple (AAPL -1.51%) was the most beloved brand in the survey. With its cultlike following and consistent marks for quality and user appeal, it most successfully crossed age, gender, and income boundaries. Apple scored highest in a variety of measures in the report, including enhancement (becoming better through use of the brand), ritual (ingraining the brand in daily activity), and identity (reflecting an aspirational image). It ranked highest in the fusing category, in which the identities of the customer and the brand are "inexorably linked." It also ranked highest under "can't live without it" and "frequency of use." According to the report, "Electronics are the things that surround you and involve you with the world," and nobody does electronics better than Apple. It brings "connected" to a whole new level.

According to Mario Natarelli, MLBM's managing partner: "The underpinning of intimacy is the closer you get to your customer, the better. That's not a new idea." As each of the companies on this list demonstrates, there are a multitude of ways to reach your customers on an emotional level. Be it by escaping, connecting, or nostalgia, it isn't so much how you establish that relationship, it's that you do. When consumers feel the love, they will show you the money.