What to watch for when Shopify reports fourth-quarter results on Wednesday.

Shopify (SHOP -6.15%) will look to extend its flawless record of earnings beats on Wednesday morning before the market opens.

Shopify provides the backbone for some 325,000 online stores, offering an easy way to set up an online store. It charges a monthly fee for its core service. On top of that, it offers additional services such as payment processing and shipping, for which it takes a cut of each sale.

Shares of Shopify are up about 27% since the company reported its third-quarter earnings results. The share price is now trading around its all-time high. Investors are expecting strong results from the company, whose revenue growth has been huge, but which has yet to turn a profit. Here's what investors should expect from Shopify's fourth-quarter earnings. 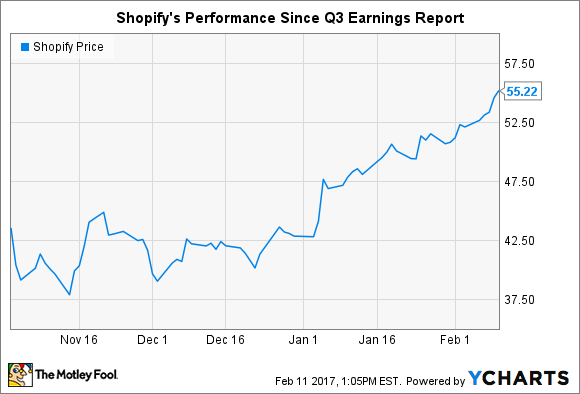 The consensus on the Street is that Shopify brought in around $121.69 million in revenue for the fourth quarter. That's on the high end of management's range of $120 million to $122 million.

Analysts expect that revenue to translate into a $0.02 loss per share. That's also in line with management's outlook for an adjusted operating loss of $1 million to $3 million. Shopify also provided a GAAP outlook of $10 million to $12 million in operating losses for the quarter.

But Shopify has consistently outperformed its revenue outlook over the past year.

Given Shopify's history of conservative outlooks, the Street may be underestimating the company's fourth-quarter results. It wouldn't be a huge surprise if Shopify once again beats analysts' expectations.

There are several important operating metrics for investors to pay attention to. First and foremost is the company's total merchants. The number passed 325,000 in the third quarter, up from 200,000 the year before.

In the fourth quarter last year, Shopify added around 43,000 new merchants, an extremely strong quarter. Management said this year's fourth quarter will be strong once again, but it tempered expectations, noting that it reports milestones throughout the year (e.g., 325,000) instead of exact numbers. Depending on when it passes those milestones within the quarter, it could make fourth-quarter additions look smaller.

In addition to those key metrics, investors should watch for management's commentary on its recent deal to integrate with Amazon.com's (AMZN -5.14%) marketplace, further strengthening Shopify's partnership with the retail giant. The new deal makes it easier for Shopify merchants to list their products on Amazon. Amazon previously shut down its Amazon Webstore service and sent its users to Shopify.

Investors should also look for comments on the continued growth of Shopify Plus, its enterprise-level e-commerce solution. Any updates on the progress of Shopify Shipping and Shopify Capital -- two high-margin products -- could be valuable as well.

Overall, Shopify looks set to produce yet another earnings beat, but the stock is priced as though the market expects as much. Anything short could hurt the stock price, but depending on what caused the shortfall, some pullback in the stock could present a long-term buying opportunity.