A high dividend yield can be tempting, but investors always need to make sure that dividend is sustainable before jumping in. There's nothing worse than buying a stock for the dividend only to see it slashed. Want to avoid that situation? Stay away from Mattel (NASDAQ:MAT), FirstEnergy (NYSE:FE), and Caterpillar (NYSE:CAT).

Tim Green (Mattel): Toy maker Mattel is going through a rough patch. Total sales slumped 4% during 2016, in part due to the loss of the Disney Princess license to rival Hasbro. Mattel pointed to various industrywide challenges to explain its poor performance, but Hasbro managed to grow revenue by 13% in 2016. This suggests Mattel may have deeper problems.

Mattel pays a $0.38 per-share quarterly dividend, good for a yield of 5.85% as of this writing. The problem: Mattel's earnings don't currently cover its dividend payment, a situation that can't go on forever. Mattel produced adjusted earnings per share of $1.06 in 2016, down from $1.26 in 2015.

The situation at Mattel needs to improve quickly for its dividend to be sustainable. Earnings will need to increase by nearly 50% just to bring the payout ratio down to 100%. This will require substantial revenue growth going forward. The comparison gets easier in 2017 as the company laps its loss of the Disney Princess license. But if Mattel can't get its act together, the dividend will be in danger.

Daniel Miller (FirstEnergy): FirstEnergy is a large utility that boasts more than 24,000 miles of transmissions lines connecting the Midwest and Mid-Atlantic regions with a total capacity of nearly 17,000 megawatts. Its 10 regulated distribution companies serve roughly 6 million consumers, and the company is absolutely at a turning point in 2017 -- for better or worse.

According to DIVCON, which rates the health of dividends and the likelihood that companies will grow or cut them, with a score of 1 being strong risk of a dividend cut, FirstEnergy gets a score of 1, one of the worst ratings available. As you can see below, by many metrics, DIVCON appears to be on to something. 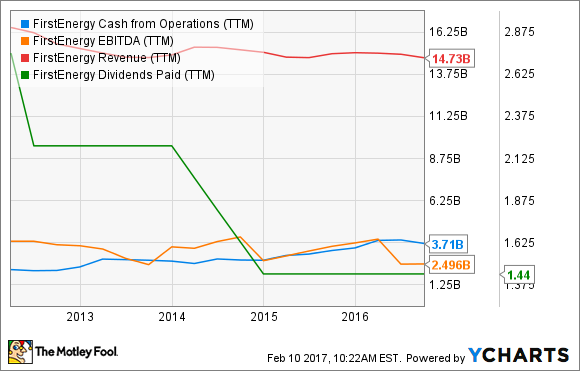 In addition to those metrics, FirstEnergy's payout ratio in 2016 was right at 100%, which is obviously unfavorable over the medium term and is understandably why the dividend has been cut in recent years. Also, FirstEnergy's operating margins and EBIT margins have consistently moved lower and are at a fraction of what they were in 2008.

By most trailing metrics, FirstEnergy seems like a logical candidate for yet another dividend cut. However, it's actually more stable now than it's been in recent years, and if its turnaround forecast for earnings holds true in 2017, its payout ratio will drop to just a little over 50%. Part of the reason for its drop in earnings in recent years has been to reposition its business after the collapse in natural gas prices. Ultimately, while its dividend is more stable than trailing metrics would suggest, if its turnaround doesn't gain traction as expected in 2017, its dividend will continue to be risky.

Travis Hoium (Caterpillar): Large-equipment sales have been in decline since 2012 as commodity prices decreased and miners needed less new equipment. The result for Caterpillar has been a steady decline in both revenue and net income over the past five years. But it hasn't affected the company's dividend.

You can see below that Caterpillar is now losing money, and earnings are trending in the opposite direction of the dividend. To make matters worse, the company has $37 billion in debt hanging over operations. 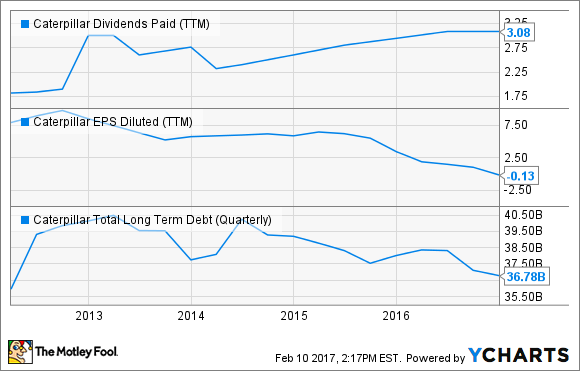 Management is hoping that operations will turn around in 2017, predicting earnings will be $2.30 per share. But the company's leadership is already saying revenue will be about $500 million lower than the midpoint of guidance given in December. So, management thinks revenue will be down around $1 billion from 2016, a year when the company lost $0.11 per share, yet is expecting to pay $3.08 per share in dividends.

Borrowing money to pay dividends isn't a position any company wants to be in, especially when equipment sales are under long-term pressure thanks to low commodity prices. Caterpillar may see reducing the dividend as a wise move in 2017 if the market deteriorates more than expected.