These stocks are historically good buys when the market hits a rough patch.

Stock market crashes often occur without warning. For that reason, investors should remain prepared for the next one. One of the best ways to do that is have a list of stocks to buy when the market starts melting down.

We asked three of our Motley Fool contributors what stocks they think investors should load up on during a market crash. They chose NextEra Energy (NEE 0.00%), Brookfield Infrastructure (BIP 1.31%) (BIPC 1.03%), and Caterpillar (CAT 0.95%). Here's why these topped their market-crash shopping list. 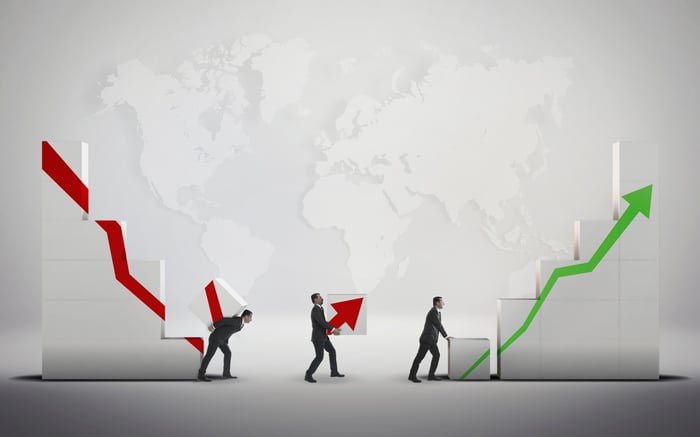 Reuben Gregg Brewer (NextEra Energy): There's one big problem with giant U.S. utility NextEra Energy: Its stock is rarely cheap. There are good reasons for this, but if the market gets irrational and the company's stock dives, investors should prepare ahead of time to jump aboard this dividend-growth investor's dream stock. Why?

For starters, the company owns Florida Power & Light, which operates the largest electric utility in its namesake state. Florida has been benefiting for years from people moving to its warm climate and low taxes. This business isn't a growth machine, but it is a very solid foundation on which NextEra has built one of the world's largest wind and solar power businesses. And it has plans to keep expanding these green businesses, with as much as 30 gigawatts of clean-energy construction on the drawing board to add to its current 26 gigawatts of capacity. 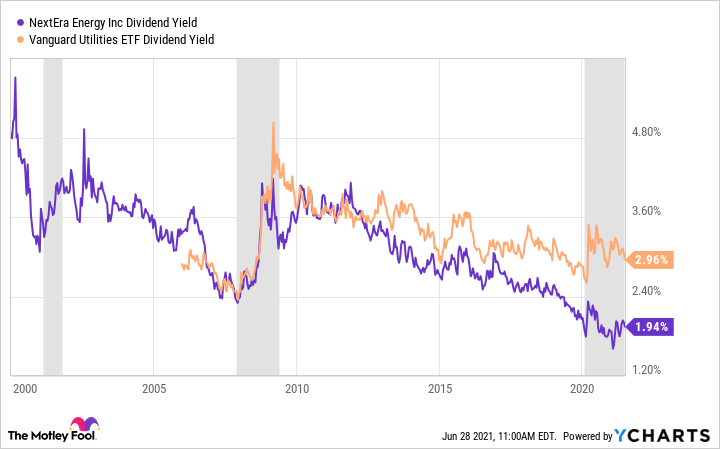 But the dividend is the real proof of how great a company NextEra is. The utility has increased its dividend annually for over 25 years, making it a Dividend Aristocrat. The annualized rate of increase over the past decade was a huge 10%, a rate that NextEra believes it can match until at least 2022 (if not longer). That's a massive figure for a utility and helps explain why the dividend yield is a miserly 2.1%, since income investors are generally willing to pay up for consistent dividend growth. However, if the stock should tank with the market, even those with a focus on yield over growth could end up with a buying opportunity.

Matt DiLallo (Brookfield Infrastructure): Brookfield Infrastructure has a knack for taking advantage of market-related opportunities. For example, when stocks crashed during the early days of the pandemic last year, Brookfield went on a buying binge. It invested $450 million into shares of a handful of publicly traded infrastructure companies in hopes that this would lead to a larger-scale investment. The company would exit several of those investments a few months later, realizing $40 million in profits.

Meanwhile, it held on to its position in Canadian pipeline company Inter Pipeline (IPL) in hopes of striking a deal. While it's currently engaged in a bidding war with another suitor, that fight has boosted the value of Brookfield's holdings. If it ends up losing, Brookfield can still cash in on another highly successful investment.

Brookfield's ability to go on the offensive when others are shifting to defense has enabled it to make several needle-moving acquisitions over the years. Those deals have helped fuel accelerated growth as market conditions rebounded, allowing the company to generate market-crushing returns over the long term.

While Brookfield's business thrives during crashes, its stock price tends to follow the market lower. Because of that, market meltdowns are a great time to load up on shares of Brookfield. That positions investors to cash in on the subsequent recovery as Brookfield's business accelerates, usually driven in part by deals it secured during the downturn.

An offbeat Dividend Aristocrat to buy on dips

Neha Chamaria (Caterpillar): When the stock market crashes, cyclical stocks almost always take deep dives as they typically reflect the health of economy. Opportunistic investors, though, would be smart to scoop up shares when the time is ripe because cyclical stocks are also quick to bounce back when the markets recover. This is especially true if the underlying companies have a timely growth opportunity ahead. Consider Caterpillar, for instance.

As the world's largest construction and mining-equipment manufacturer and an important player in the energy and transportation sectors, Caterpillar is a top economic bellwether. That explains why Caterpillar shares have almost always been battered during stock market crashes but have also outperformed once things turned around. If the market crashes any time in the near future, there are two big reasons why you'd want to buy shares of Caterpillar. 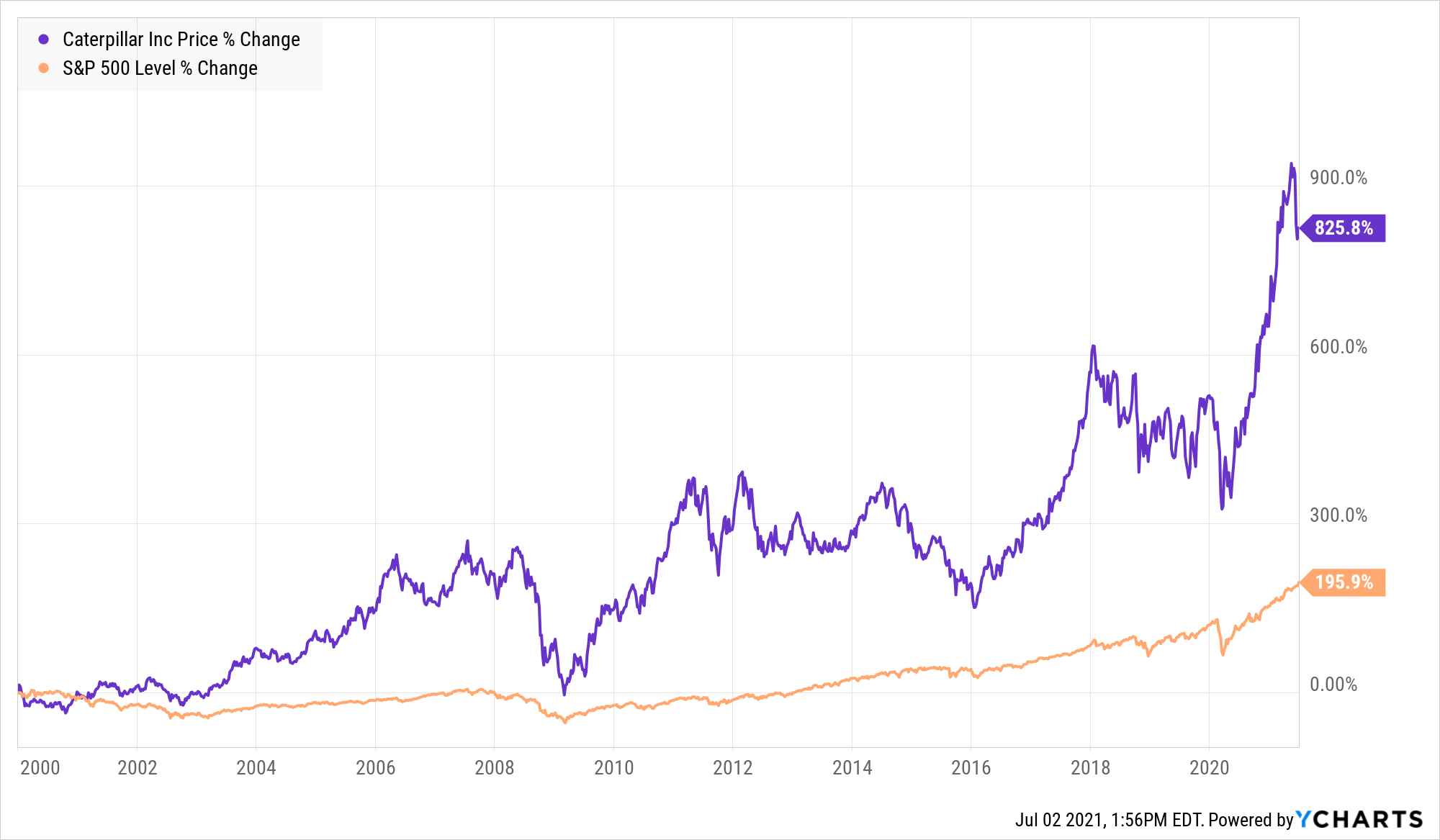 Second, Caterpillar's resilience even in torrid times is evident from its dividend history: Caterpillar is a Dividend Aristocrat that recently increased its dividend for the 27th consecutive year, meaning it rewarded shareholders with a higher payout even during historical stock market crashes like the one in 2008. So next time the stock market and Caterpillar shares tumble, you'd still receive dividend checks in your mail and enjoy a high dividend yield while you await a recovery. Here are some statistics for you to ponder: Caterpillar's dividend yield -- which is hovering around 2% currently -- shot up to nearly 4% last year and topped 5% in mid-2016 when the markets tanked.