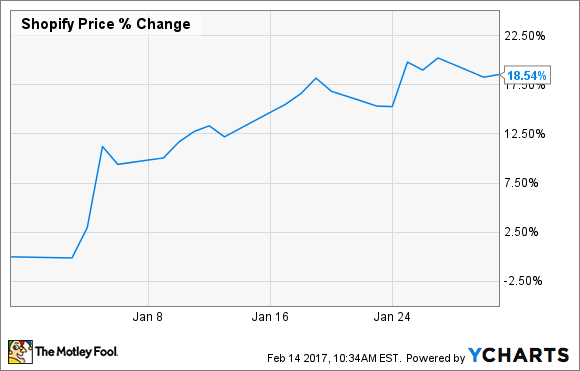 The cloud-based commerce platform made its integration with Amazon.com (NASDAQ:AMZN) generally available to its more than 325,000 merchants in December. The connection gives Shopify store owners seamless access to the millions of customers searching for products to buy on Amazon.

"Our work with Amazon is an important step in strengthening our robust multi­channel commerce strategy and the ability of our merchants to sell anywhere their customers buy," said Brandon Chu, Director of Product at Shopify, in a press release. "With an estimated 40% of Shopify merchants already selling in online marketplaces, Shopify has further simplified the processes to gain entry into Amazon."

Shopify also announced a continuation of its partnership with famed life and business strategist Tony Robbins in January. Winners of Shopify's 2017 Build a Bigger Business competition -- this year's version of the company's long-running entrepreneurial contest -- will get to embark on a learning retreat with Robbins and other Shopify coaches, along with receiving a host of other prizes. 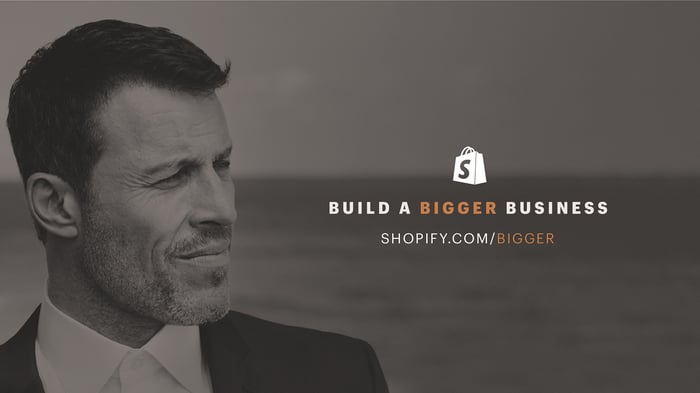 "Helping the leaders of tomorrow stretch the boundaries of what they thought was possible is a long-time passion of mine, and I'm thrilled to continue this partnership," Robbins said.

Impressively, Shopify's competitions have helped create over a 100,000 new businesses that have sold millions of dollars in products.

"Since the launch of the Build a Business program in 2010, we've seen thousands of companies start and grow successful businesses using Shopify under the tutelage of the world's best business minds," said Shopify COO Harley Finkelstein. "In keeping with tradition, we're equally excited to watch this year's field of competitors embark on a new journey."

The integration with Amazon helps to further strengthen Shopify's platform, which now allows merchants to conveniently manage their product catalog for their e-commerce website, Amazon store, retail store, and other sales channels all in one place.

Additionally, the partnership with Robbins should help drum up even more excitement around Shopify's business competition. In turn, many of the entrepreneurs that take part in the program could receive the resources and coaching they need to take their businesses to the next level. It's a win-win, as Shopify's revenue -- particularly in its payments service -- scales nicely along with the success of its merchant customers.

As such, I expect Shopify to once again post strong increases in sales and profits when it reports earnings on Feb. 15, and in the quarters ahead.