Please ensure Javascript is enabled for purposes of website accessibility
Log In Help Join The Motley Fool
Free Article Join Over 1 Million Premium Members And Get More In-Depth Stock Guidance and Research
By Adam Levy - Feb 16, 2017 at 9:33AM

But that's not necessarily the worst thing in the world for investors.

Twitter's (TWTR -0.23%) lackluster earnings report last week was made worse by an underwhelming outlook for 2017. Management projects it will produce adjusted EBITDA between $75 million and $95 million for the first quarter at a margin of 17% to 17.5%. Last year, Twitter produced $180 million in EBITDA at a 30% margin.

While Twitter didn't provide a range for revenue results, the EBITDA numbers imply sales between $428 million and $559 million. During the company's conference call, COO Anthony Noto explained the guidance range:

Well, guess what. Twitter is de-emphasizing some of its ad products. Twitter is reassessing its direct response, promoted tweets, and TellApart products, according to a report from TechCrunch. While it isn't shuttering any of the products, the move is exactly what Noto described in the earnings call. What's more, Facebook (META -0.79%) and Snap (SNAP 3.02%) aren't likely to lay off on the competitive pressure as Twitter refocuses its ad products. 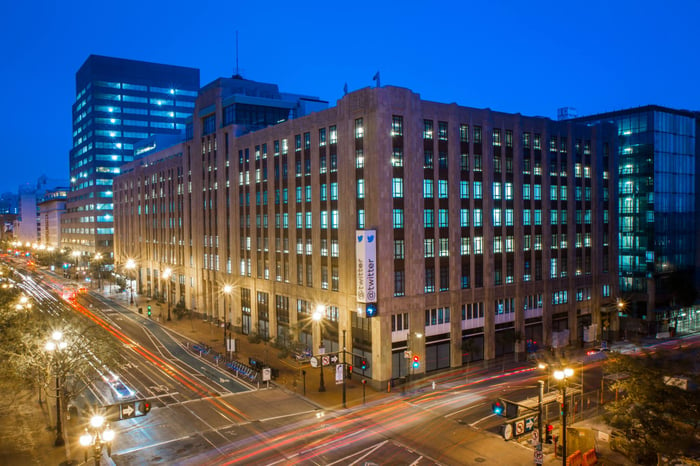 Revenue was already declining for these products

In Twitter's fourth-quarter letter to shareholders, management made it clear what was supporting revenue growth and what was hurting it. On the negative side were direct response, promoted tweets, and TellApart.

"We haven't made the progress we anticipated over the last year in some direct response ad formats, both in terms of improvements to existing product features as well as the impact of new product features. We have also seen increased competitive pressure resulting in a decline in our original Promoted Tweet engagement ad format," management wrote.

"We expect contributions from non-owned-and-operated advertising revenue to face significant headwinds in 2017 from factors impacting TellApart," it added later.

Despite improvements in user engagement, Twitter saw fewer clicks on direct response ads and less engagement with promoted tweets. That may be because Twitter users are used to skimming through their timelines looking for something interesting, so they skip right over advertisements. Comparatively, Facebook users are more likely to read most of what's in their news feed, making it more likely for them to take a closer look at advertisements.

Not all direct response ads will get scrapped. "We've also had success in some of our direct response products that have achieved significant scale, and we'll continue to invest in those," Noto told analysts on the earnings call.

TellApart, which Twitter bought for $479 million in 2015, provides ad-targeting technology for users across multiple devices. Twitter integrated that technology with some existing ad products, but continued to run its legacy ad products as well. TellApart is found in Twitter's non-owned-and-operated revenue, which accounted for 13% of its total ad revenue last quarter. Twitter may eventually shutter or try to sell off TellApart as it focuses on its products that are actually growing.

Twitter's big focus in 2017 is video, and it's no different with its ad products. Video is already Twitter's largest revenue-generating ad format, and it's exhibiting strong growth. Noto says some of that growth is fueled by pulling in ad dollars from non-digital ad budgets like TV. "What we're doing in video positions us to capture ad dollars that are not in this very competitive digital advertising bucket," he said on Twitter's fourth-quarter earnings call.

Snap sees a similar opportunity for its product. In its S-1 noted that viewers shifting time from television to mobile is one of its biggest opportunities, and its vertical video ad format will help it capitalize on the trend. Likewise, Facebook is pushing heavily into video, working to attract professionally produced content and the ad dollars that come along with it.

Nonetheless, Twitter sees its best bet as focusing on video. "We're seeing really strong trends behind our video product, especially the Amplify product and the live product. They're very differentiated and they're more organic to the platform. So we will continue to invest in those ad products that do just that," Noto told investors.

Twitter said it was going to focus on turning a profit in 2017, and that means cutting the losers and focusing on its winners. In the short term that means a significant hit to its revenue, but if it executes, it could turn a profit. That profit, however, may be a lot smaller than what investors originally anticipated when the company went public.