The organic supermarket chain threw out a longtime goal of opening 1,200 stores in North America. It's one step in a long retrenchment for the former market darling.

The organic grocer reported its sixth straight quarter of declining comparable sales as the company's tailspin continues in the face of increasing competition in the organic and natural grocery space. 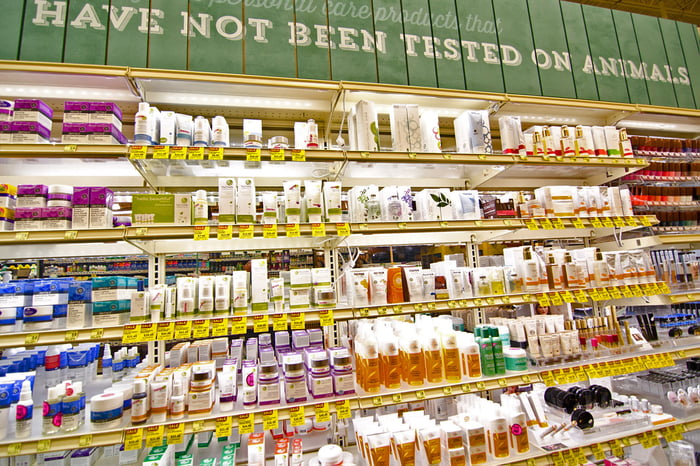 But the long-term prospects for Whole Foods looked equally bleak, as management announced a decision to pull back from a long-held goal of opening 1,200 stores in North America. For years, the company had maintained that it saw room for 1,200 Whole Foods across the continent even as sales slowed, but now, after the recent management shake-up, the company's leadership is facing the reality that consumers simply aren't demanding another 700 Whole Foods stores.

We will continue to grow but no longer have a goal of [1200-plus] stores. We remain optimistic about the future growth potential for our 365 format but want to see how this next round of stores perform before getting more aggressive. As we work to position Whole Foods Market for long-term success, we have carefully evaluated our portfolio of stores and have made the difficult but prudent decision to close nine stores in the second quarter.

A dose of realism

With that statement above, Mackey threw cold water on virtually every reason to believe in the company's long-term growth. With the comparable sales decline showing no signs of abating, investors have no choice but to look to new stores for growth. However, by slashing its long-term goal of 1,200 stores and cutting its 2017 outlook to just 5% square footage growth, down from 7.1% last year, the company has made it clear that new stores are not going to be the growth driver that investors once hoped they would be.

Similarly, Whole Foods' budget-priced 365 chain was hailed by some as a potential savior for the company, but management is now putting the brakes on that concept with plans to open just three new 365 stores this year, down from a one-time projection of around 10.

It's clear why Whole Foods is dialing back its new-store construction. Metrics that show how efficient the company is with its investments like sales per square foot and return on invested capital have plummeted in recent years. ROIC has shrunk from a peak of 15% in 2015 to a projected 11% this year, and sales per square foot are projected at $853 this year, down 10% from $936 in fiscal 2014.

There's ample evidence that the U.S. is over-stored, as the country has much more square footage of retail space per person than other developed countries -- this coupled with the advent of e-commerce -- and the saturation in the supermarket has become apparent in recent years.

E-commerce options like meal kit services Blue Apron and Plated have been swiping sales from traditional grocery chains, and Amazon.com is increasingly intent on grabbing a bite of the grocery market as it expanded its Fresh delivery service to several new cities last year and is testing out a cashier-less retail experience with its new Amazon Go store.

Whole Foods rivals like Kroger (KR) seem to intuitively understand that the industry is saturated. That's why the biggest traditional supermarket company has chosen to expand by acquisition, with purchases of Harris Teeter, Roundy's, and Murray's Cheese in recent years, rather than opening new stores. Doing so allows Kroger to grow and eliminate a competitor at the same time, preventing the industry from becoming even more competitive.

The U.S. population is growing slowly, and there's a natural ceiling for how much food consumers will buy. Appetites are limited, of course, and the industry can only withstand an increase of 1%-2% in total square footage.

With its traditional competitive advantage having been chipped away, Whole Foods needs to regroup and figure out what it stands for. Backing away from its 1,200 store goal may be a necessary step on that path, but the recent report offers little encouragement for investors. Until the company can reverse the ongoing slide in comparable sales, the stock will likely continue to be stuck around $30.