A few weeks ago, the internet erupted over news that Congress voted to reverse the Stream Protection Rule, which was just about to take effect. The law aimed to protect some 6,000 miles of streams in the nation's interior from coal debris dislodged by surface mining techniques. It was viewed as a sign that the Trump administration was making good on its promise to support the struggling coal industry, which has lost about 25,000 jobs since 2009.

Environmentalists weren't quite as excited, while others worried about the consequences of resurrecting the fortunes of the dirtiest power source. But whether or not "Trump Digs Coal," as popular campaign signs in Appalachia touted, many people on both sides are overlooking an essential point: Regulations have played a backseat role to market forces in coal's recent decline. That means deregulation is unlikely to save coal stocks such as Foresight Energy LP (FELP), Westmoreland Coal Company (WLB), and Cloud Peak Energy (CLD). Here are three reasons detailing why. 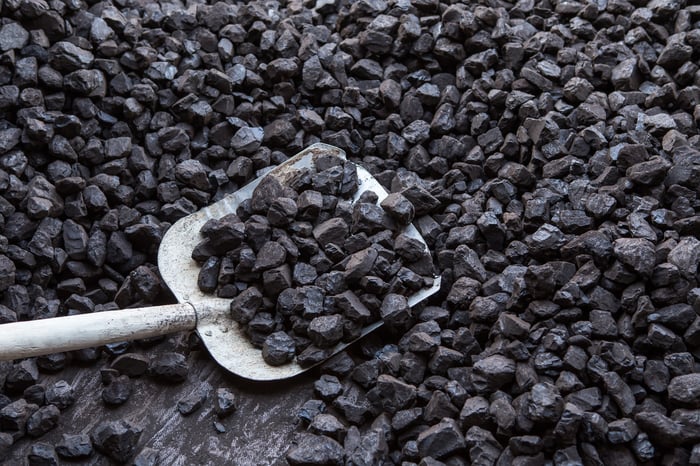 Headlines and snippets reduced down to social media-friendly character limits made a big point about the rollback of the Stream Protection Rule. But it wasn't expected to be all that burdensome on the coal industry as a whole, let alone any individual company.

The Congressional Research Service wrote a report (link opens PDF) about the estimated impacts of the rule. There were beneficial health impacts from reduced exposure to heavy metal contaminants in drinking water used by communities near mining operations, and reduced carbon dioxide emissions from tree plantings required to restore streamlines. There were negative impacts as well, including the total annual cost of compliance, which was expected to total $52 million -- for the entire coal industry. Half of that was expected to be placed on Appalachian operations.

To put that into perspective, Foresight Energy LP generated just $31.9 million in operating profits through the first nine months of last year. Coincidentally, that was nearly identical to peers Westmoreland Coal Company and Cloud Peak Energy, which managed operating profits of $31.7 million and $31.2 million, respectively, in the same period. That should make it clear that minuscule savings from rolling back the regulation won't have a significant impact on any individual company.

The number of coal-fired power plants operating in the United States dropped from 629 in 2003 to just 427 in 2015. In fact, coal units comprised nearly 80% of all retired electricity generation capacity in 2015, amounting to 18 gigawatts of shuttered coal power plants. The continuous string of closures led to the lowest rate of coal production in the United States last year since 1978, according to the U.S. Energy Information Administration (EIA).

While it's true that increased regulations on carbon dioxide and other emissions have helped to accelerate this decline, there are other significant contributing factors. One major reason that doesn't get enough attention: the age and size of coal power plants that were retired.

Companies have chosen to retire mostly older and smaller coal power plants in the last two decades, while keeping newer and larger facilities in operation. Newer units tend to emit fewer pollutants, making it easier for them to keep up with regulations or cheaper to invest in equipment allowing them to do so. Larger units boast improved economics and also tend to be more favorably located on the map. Consider the makeup of coal retirements in 2015 as tallied by the EIA:

The continuation of coal power plant retirements will keep reducing consumption of coal over time, which is bad news for coal miners such as Foresight Energy LP, Westmoreland Coal Company, and Cloud Peak Energy, no matter their cost of production. Investors holding onto coal stocks should be particularly worried about the large amount of generation built before 1970 that is still in operation today. Stagnating electricity demand nationwide and a sharp reduction in new coal power plant construction don't exactly bode well for an industrywide recovery, either.

The somewhat good news in the near term is that the EIA thinks it's possible for coal power to maintain at least a 30% share of the country's electricity generation. However, the agency also admits that its underlying assumptions could be challenged by coal's real nemesis: natural gas.

At this point it's no secret that the coal industry has been weakened by the rise of cheap and abundant natural gas. Throw in the quick adoption of clean wind power and increasingly cheap solar power, which combined to provide over 5% of the nation's total electricity in 2015, and we arrive at the current sorry state of affairs for coal stocks. The best performer since mid-2014 out of the group above is Westmoreland Coal Company, which has lost 42% of its value in that time! 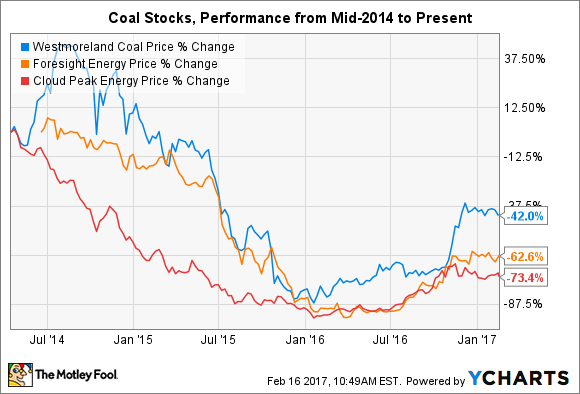 Unfortunately, things probably won't be getting any better in the long term, even without further emissions-related regulation such as the Clean Power Plan. That's because carbon dioxide isn't the only air pollutant targeted by regulations. Sulfur dioxide and mercury -- both emitted in heavy volumes by coal combustion -- are also being cut out of allowable emissions gradually over time. As mentioned above, that will result in older and smaller power plants being retired each year for the foreseeable future.

While the EIA projects for U.S. coal production to rise in the next two years, the increase will be barely noticeable and completely dependent on mines in the Western states. Job losses and declining revenue will continue for Appalachian mines, while those in the interior region will struggle to maintain current operations. More importantly, despite an increase in natural gas prices recently, more natural gas-fired generating capacity will be added to the grid in the next two years than in any two-year period dating back to 2003-2004. Even worse, most of the additions will be highly efficient combined-cycle turbines, which will be able to push more coal off the grid over time.

Coal stocks have rallied since Election Day, but the results of the general election will end up having very little effect, if any, on how this story ends. The most likely scenario is that deregulation, or even the perception of its effects, will simply prolong the inevitable decline of the coal industry. Perhaps coal production flatlines or decreases at a slower pace than it has previously. Maybe coal miners can raise funds or refinance debt at more favorable rates than have been available recently. But market forces have already sealed coal's fate, which no amount of deregulation can reverse.

Why Coal Energy's Recent Comeback Will Be Short-Lived

Cloud Peak Energy Inc.'s Shares Just Plunged as Much as 11% -- Here's Why