Coal plants are being shut down and they're not coming back.

Coal stocks have had a strong run over the past year, mainly on hopes the Trump Administration would drive higher demand and industry profits. So far, there's been some evidence that coal production has made a bit of a comeback as exports have increased, primarily to Asia, where demand is up.

Stocks like Arch Coal (ARCH 6.39%), Cloud Peak Energy (CLD), Consol Energy (CEIX 9.30%), and Peabody Energy (BTU) have all responded well to a more favorable regulatory environment over the past year and have all gained over 20% on the market. But if you look deeper into the coal industry, it's easy to see why the gains may be short-lived. 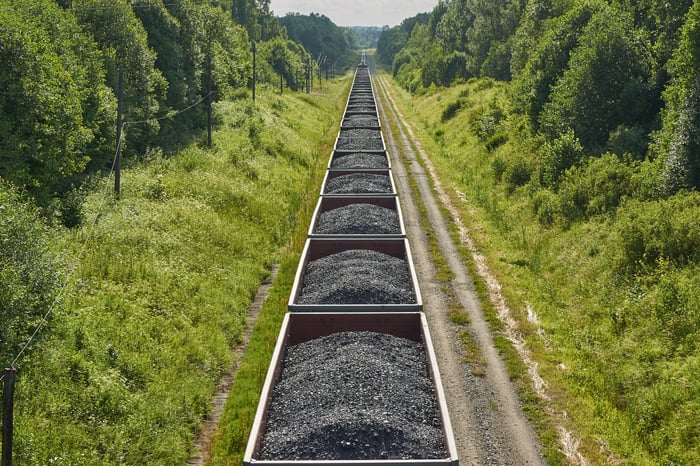 Coal demand in the U.S. is fundamentally driven by the electric power sector. If they're burning an increasing amount of coal the industry should be in good shape. But U.S. electric power consumption of coal has fallen 1.8% in the last year through October 2017, the latest data available.

Even more problematic is that demand in the U.S. will fall over the next three years and may never come back. Below is a table showing planned capacity additions and retirements between 2017 and 2020 by fuel type.

You can see that only two coal plants are expected to be added in this four-year time period, compared to a whopping 399 natural gas plants. Wind and solar energy are also booming and expect to add nearly 40 GW of capacity combined, which only includes planned utility projects.

If you want to know why coal is dying, this table shows you where the energy industry is heading. Coal is being shut down by the utilities who own power plants and they're favoring natural gas and renewable energy instead.

The reason coal stocks are doing well is largely because of increased exports. Through June 2017, coal exports were up 55.4% to 44.1 million short tons. That's a positive, but for perspective, the U.S. electricity generating industry consumed 314.4 million short tons over the same six-month timeframe, so exports alone won't save coal long-term.

It's also likely international coal growth will slow in coming years. India and China have recently shunned coal, shutting down some plants and scrapping plans to increase coal power generating capacity. China is now the biggest wind and solar market in the world and in the middle of 2017 India made an about face, canceling 14 GW of planned coal plants because renewable energy was a cheaper option. The country is also phasing out 5.5 GW of old coal plants, showing how serious its plan is to reduce coal imports.

We're not seeing China or India's reduced reliance on coal yet, but as more wind and solar projects are built we'll see coal demand decline in both countries. Long-term, that'll be detrimental to U.S. coal exports.

For any utility or country looking to build new electric power generation, coal is no longer the cheapest option. Wind and solar are both less expensive than coal and in some places they're both cheaper than natural gas as well.

On a federal level in the U.S., fewer regulations may be helping coal production short-term, but long-term it's demand these companies need to survive. You can see that coal plants are being shut down despite fewer coal regulations in the U.S. and the underlying competition from cleaner sources of energy aren't going away. Coal energy's slow death continues and I think the recovery in coal stocks of late is a short-term blip, not a long-term trend.