It's no surprise to see Toyota (NYSE:TM) at the top of one of J.D. Power's annual vehicle-dependability studies. As stories go, that's pretty much "dog bites man": not something that will draw a lot of attention.

That's to Toyota's immense credit, of course. But what might surprise you -- in a "man bites dog" kind of way -- is that General Motors (NYSE:GM) is very close behind. Believe it or not, it's the third year in a row that GM has shown up near the top of J.D. Power's Vehicle Dependability Study. That has some important implications for GM investors. 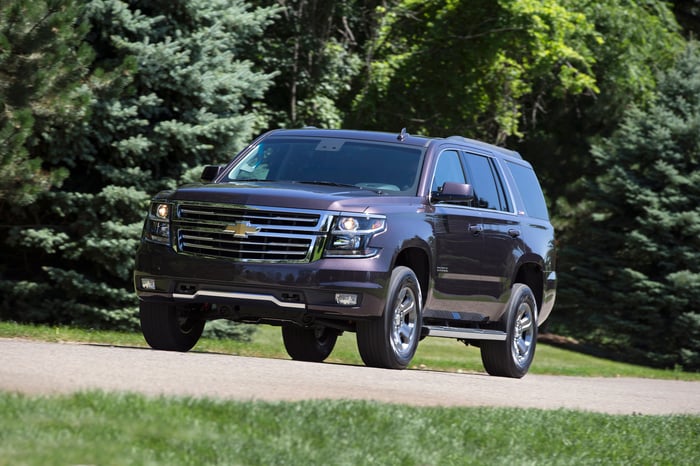 The Chevrolet Tahoe was one of four GM models to win its segment in the latest J.D. Power Vehicle Dependability Study. Image source: General Motors.

Why this J.D. Power study is important

First, let's explain what this study is about. The J.D. Power Vehicle Dependability Study (or "VDS") is an annual study that measures problems in the third year of a vehicle's ownership. In other words, this year's study looked at problems that 2014 model-year vehicles had in 2016.

Between October and December of last year, J.D. Power surveyed 35,186 original owners of 2014 model-year vehicles. Owners were asked to detail problems they'd had over the previous 12 months in several key areas. The survey touches on issues with features and controls and the overall driving experience, as well as specific parts that fail and require service.

The idea is to evaluate how well an automaker's vehicles hold up over time. It's a helpful complement to another big J.D. Power study, the Initial Quality Study, that looks at problems in the first 90 days of a new car's ownership. (That one typically comes out in June.) Taken together, the two studies give us an idea of how an automaker is doing on the quality front.

The VDS ranks individual auto brands by the number of reported problems per 100 vehicles. It also names the top three models in each of the major market segments. So there are a couple of ways to do well on the VDS: An automaker's brands can rank highly, or it can have several models named in the tops of their segments, or both.

By those standards, Toyota "won" this year's VDS -- and GM came in a strong second.

How GM compared with the best in the business

Here's how the brands stacked up in this year's J.D. Power Vehicle Dependability Study: 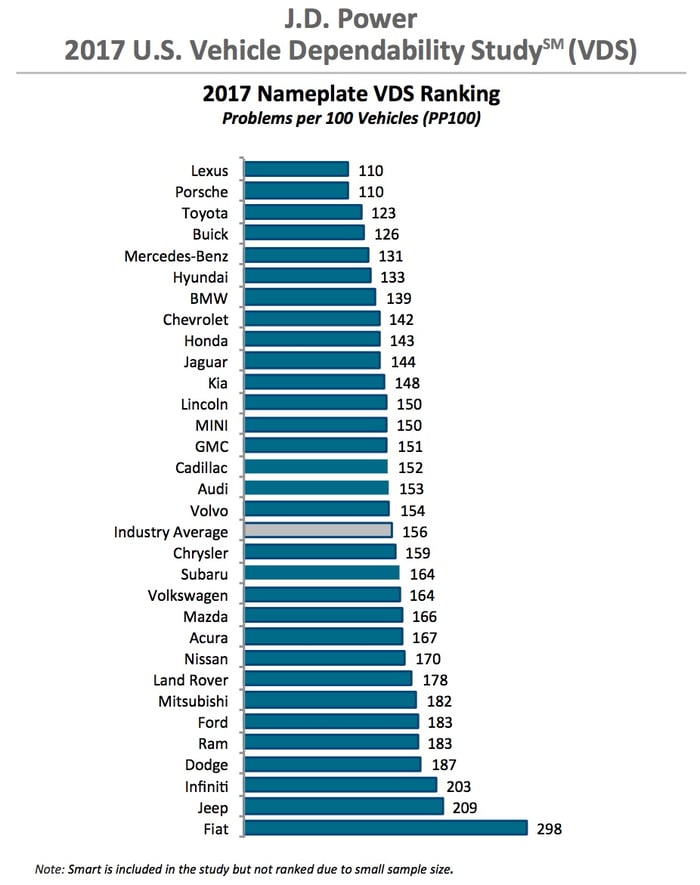 As you can see, Toyota's Lexus brand tied with Porsche to top the charts, with the Toyota brand right behind. But look at who's next -- and eighth, one ahead of Honda (NYSE:HMC) -- and fourteenth and fifteenth. It's GM's four U.S. brands, all solidly above the industry average -- and all solidly ahead of Subaru, Nissan, Audi, and other brands historically touted for quality.

When it came to the individual-model segment wins, Toyota was again tops, winning 10 of 18 segment awards. But GM won four -- again, putting it in a solid second place: 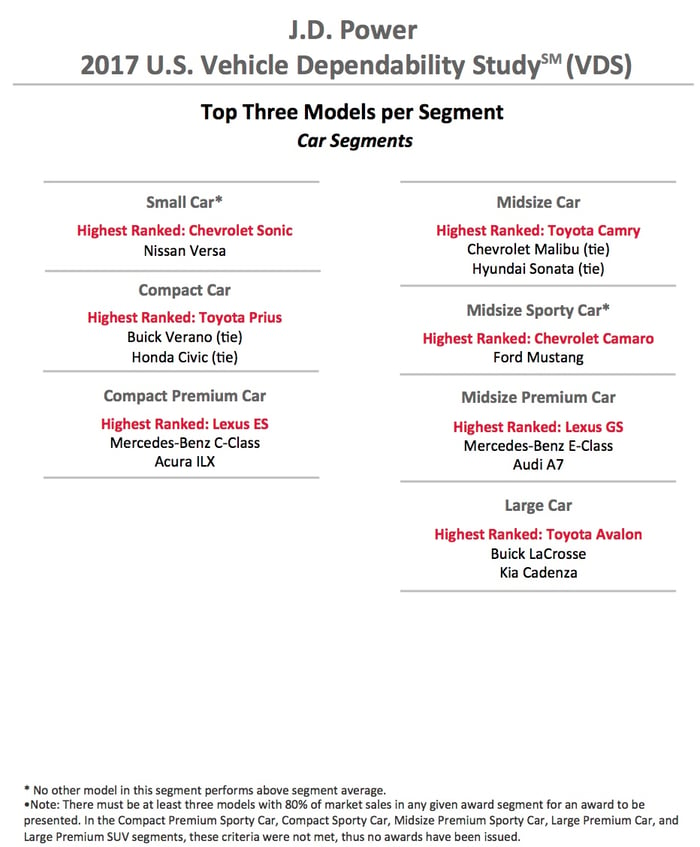 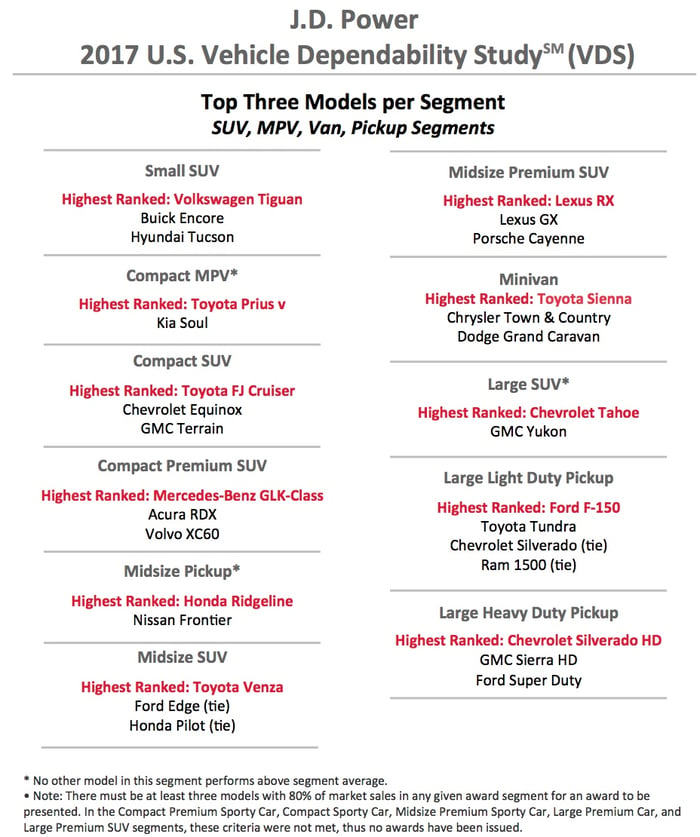 J.D. Power said that continuing increases in "technology-related problems" drove the overall average lower for the second year in a row. Technology-related complaints have focused on in-dash "infotainment" systems, which by themselves accounted for 22% of all problems reported. Possibly related: Reports of battery failures were up sharply (44%) from the 2016 study.

What does this mean to GM investors?

This is another high-profile reminder that GM's talk about improved quality isn't just talk. Remember, the vehicles studied in the VDS were 2014 models. But GM also did well on last year's VDS, with 2013 models, and on 2015's, with 2012 models.

Why is that important to investors? It's because slowly but surely, retail buyers are catching on to the fact that GM's cars, trucks, and SUVs are a lot better made than they were just a decade ago. GM is able to sell them at much stronger prices, with much lower profit-robbing incentives.

Also relevant here: Higher rankings on the VDS will support higher prices for used GM vehicles. That in turn helps GM offer more competitive leasing deals, as lease rates are determined by the expected value of a car at the end of a lease term.

Those factors are big parts of why GM's operating profit margin in North America last year was a very strong 10.1%, and a big part of why CEO Mary Barra is optimistic about GM's prospects in 2017, despite a sluggish market. This latest study from J.D. Power certainly won't hurt.